As was pointed out earlier this week by out predictions specialist, Speed Goggles, “I’m not sure how much foot time these guys have had, but they say talent doesn’t go away.” And right she was. 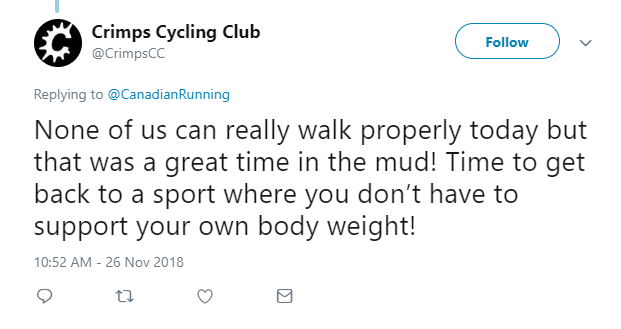 Before the Crimps were cyclists, they were runners. Boorsma is a former University of Guelph athlete who accumulated 13 CIS gold medals during his intercollegiate career. His other teammates are also former Guelph Gryphons who won several nationals cross-country championships together.

Boorsma said that the plan to race a team in 2018 was launched last year. “In 2017 a few of our club members (John Parrot, Derek Snider, Matt Stanley) ran in Kingston and afterwards hatched a plan to bring a team back in 2019 to win the masters race. Since our entire roster wouldn’t be eligible for that category, and we wanted to run together, we stepped up to the open race.”

Bruchet has now won two ACXC national titles in a row. The two-time champ said post-race, “I’ve been working hard all fall. This one was important to me after missing six or seven weeks in the summer.” Bruchet suffered an injury this summer that took him off of the track for most of the season.

Complete results can be found here.