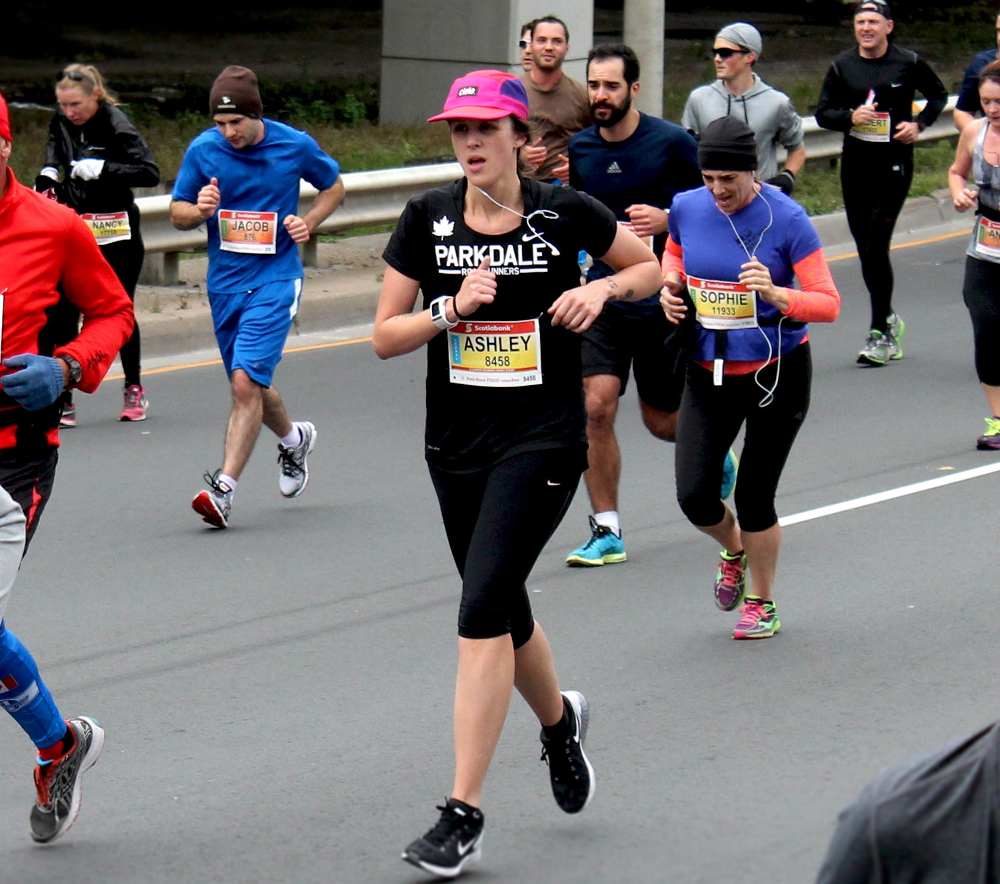 I’ve been running on and off my entire life but never really thought about it as anything other than a means of training for other sports. I by no means was someone you’d describe as athletic. I grew up in a small town, the athletic kids were the ones off doing team sports every weekend. That wasn’t me.

RELATED: I told myself that if I could get through the marathon, I could also finish my PhD.

About eight or nine years ago, I started running more frequently. It began as running up and down side streets, places where people wouldn’t see me. Eventually I began running more and started hitting up a friend with my running questions. He always answered everything, recommended I read Haruki Murakami’s What I Talk About When I Talk About Running, and told me to come out and run with his crew: The Parkdale Road Runners.

It took me weeks to work up the courage to do it. Eventually I showed for my first group run one day. The rest, as they say, is history.

Now, running represents many things to me. Sure it’s important for my physical health, but it’s also huge part of my mental health– my mental well being. As a writer, running allows me to work out my thoughts and ideas in a natural way. I also feel the most powerful and strong when I run, when I sweat. Few things feel as magical as a good run when everything’s firing correctly.

RELATED: I’m an archaeologist and I’m running for those who can’t go back to their home country.

Unfortunately not everyone is able to experience the joys of running– my mother being one of those people. Many years ago, she was diagnosed with lupus. All the aches, the way she walked when she got up from a chair, the rashes, they now had a name. My family was changed dramatically when she was diagnosed, unable to work because of the pain. She would often hear things like “but you look fine” and “I don’t see what’s wrong with her.”

That’s the thing. Lupus is an inflammatory disease. It’s your body’s own immune system attacking your tissues and organs. My mom could be fine one day and then unable to walk the next. She’s able to work now and has good and bad days. In fact, she works harder than most people I know. Knowing the pain she’s experiencing and seeing how hard she works is an inspiration. I think about this when my legs burn at the 18K mark of a half-marathon and all I want to do is walk or give up. Because of the strength of my mom, I chose to represent Lupus Ontario for the charity challenge at this year’s Scotiabank Toronto Waterfront Marathon.

What would you say are your defining characteristics as a runner?

What do you admire most in a runner?

AD: The ability to push themselves to that uncomfortable place, and stay there. It’s difficult to do, and when I see runners doing it I can’t help but be inspired.

What is your idea of happiness?

AD: My idea of happiness I feel may change a bit depending on where I am in my life. At this exact moment, happiness is doing what I love, surrounded by people that I love.

Who are your athletic heroes?

AD: My running friends. The people I train with: Parkdale Roadrunners and Academy Of Lions Run Crew. We’ve all seen each other at our super highs and mega lows. Each one of them has smashed goals and inspired others along the way – that’s a hero.

Other than where you are now, where would you like to live?

AD: New York City. I’ve always been drawn to the energy and history of that city.

What is your greatest running-related regret?

AD: I really regret not sticking with running while I was in high school, who knows what more experience could have gotten me.

What is your greatest fear?

AD: I’m an over-thinker, something I’ve been trying to chill out about. I’m sure there are many fears tied in with that trait somewhere. Like I said, I’m working on that.

If you could change one thing about yourself, what would it be?

AD: I try not to get into the “I want to change ‘x’ about myself” mentality too often, as I don’t think it’s too healthy of a place for me to be. I’m more about trying to except the person that I am, flaws and all.

What’s one thing you can’t live without?

What is your motto?

AD: You got this!