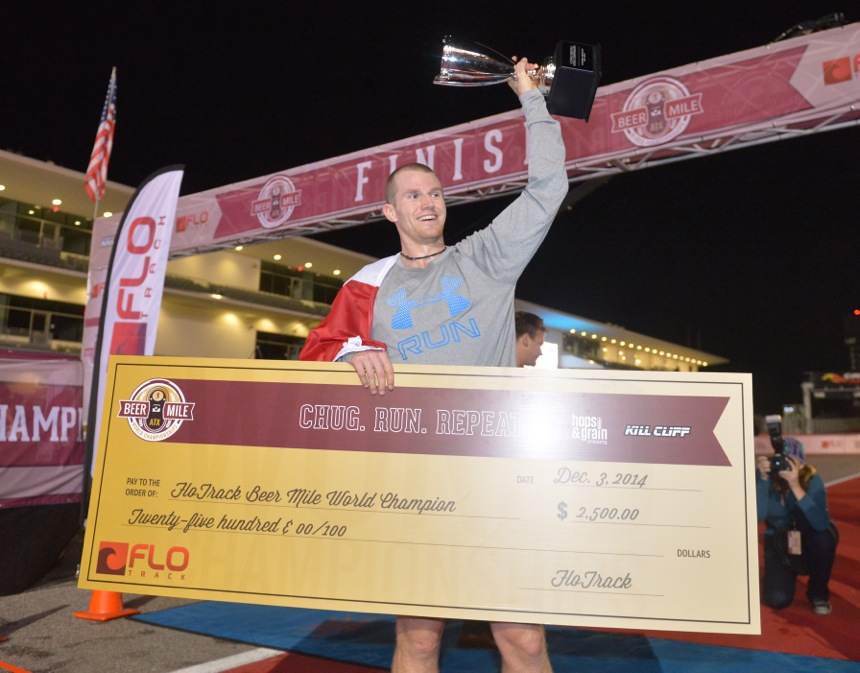 Now, the 27-year-old Winnipeg native will line up in the Modo Spring Run-Off 8K in Vancouver as one of the sport’s newest personalities. The race kicks off the 2015 Canada Running Series.

It has long been known that runners enjoy beer and over the years the major brewing companies have poured millions of dollars into road racing.

Among those Gallagher beat in Austin that day was the 2013 world championship 800m silver medallist, Nick Symmonds. The American, who was also fifth in the 2012 Olympic 800m final.

“The thing about Corey is that he is a good runner, but not a world class miler by any means,” Symmonds explains. “However, when it comes to chugging a beer, or four, I’m not sure there is anyone in the world who can beat him. Combine good running skills and incredible drinking skills and you have Corey Gallagher, the world’s best beer miler.”

Gallagher is a postal worker who takes his training very seriously. Running between 75 and 80 miles a week he ran the 2014 Toronto Yonge Street 10K in 30:32. That earned him 10th place.

He admits that the beer mile was originally a lark that he happened to be good at despite the fact that he is a moderate beer drinker.

“It was just one of those goofy things,” he recalls of his start. “I was always a runner, running at the University of Manitoba. We would go out in March and clear the track of snow and do (a beer mile). You would look on ‘Beermile.com’ and see some of the fast times people run.

Although the winter has been especially hard in Winnipeg, and he has been forced to spend an inordinate amount of time on the treadmill rather the icy streets, Gallagher is optimistic that he is in better condition than he was this time last year.

“The Modo Spring Run-Off 8K is going to be the rust buster of the year,” he reveals, “and I will see where I am at. Then it will be the Toronto Yonge Street 10K and I’ll see if I can get a PB there.

While his focus at the Modo Spring Run-Off 8K is to run fast. Following the race he will enjoy a beer with other runners at the Stanley Park pavilion.

Edited from a press release by Paul Gains.