Lewis Kent, Canadian university student and current world record holder in the beermile, will be competing for the country in the Beermile World Classic in San Francisco this weekend. 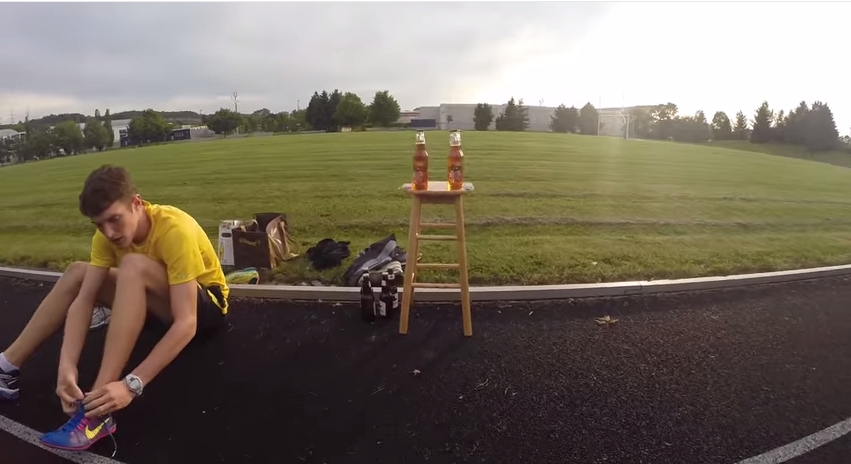 Beermile nickname: My beer mile nickname is “Capeman.” In beer miles that aren’t serious/record attempts, everyone usually dresses up in whatever ridiculous costumes/clothing they have. I always rock a green cape!
My pump up song is: My pump up song is currently “Peanut Butter Jelly” by Galantis. It’s a nice upbeat tune that doesn’t seem to get old.
My favourite beer is: My favourite beer is Innis and Gunn. It’s a Scottish Oak Aged beer, I highly recommend it (I am Scottish after all).
My favourite workout is: My favourite workout is 400m repeats. Somewhere between eight and 12, maybe with a short tempo before depending on what part of the season it is. Nothing feels better than running some smooth 400s.
My running hero is: I definitely have certain athletes I cheer for, but I wouldn’t call any of them my “hero.” Someone I have always looked up to in running and in life though is my dad. He ran his first half marathon this year and has been racing ever since my first 5k seven years ago. Whenever he sets his mind to something he works hard until he gets it, and that’s something I try to do as well.
If I could only run one route for the rest of my life it would be: If I had to run one route for the rest of my life, it would have to be up Mont Royal in Montreal. We usually travel there twice a year to race and the mountain makes for a great long run while discussing the shenanigans from the night before.  After a long climb to the top, there is a beautiful view of the entire city.
Finish this sentence: “When I run I _____”: When I run I am happy to be doing something I enjoy so much. When I stride out I feel like a gazelle, although I’m sure that’s the last thing people are thinking, haha!
What’s harder than a beer mile:  I’d imagine flying a plane, getting a black belt, and a couple of other things are a little harder. Personally, I’d say attempting to eat a 2.5 kilogram lasagna in one sitting was much harder than any beer mile I have ever done!