The 2022 Houston Half Marathon is set to take place this Sunday, drawing many of the world’s top elite to the event. In the field is Kitchener, Ont’s., Ben Flanagan, who ended his 2021 season on a winning note, looking to continue his string of solid performances into the new year. He is heading to this weekend’s half marathon with one thing on his mind: Jeff Schiebler’s 23-year-old Canadian half-marathon record of 61:28.

“I am looking forward to competing,” Flanagan says. “The plan is to run conservatively to tackle the Canadian record. It’s engraved in my head.” The 21.1 km distance isn’t foreign for the former NCAA 10,000m champion. In 2020, he ran 1:03:19 to win his half-marathon debut in South Carolina. His debut time was the 10th fastest ever by a Canadian male, and on Sunday he has the chance to better his result on one of the fastest courses in North America.

The Dirty Stuff: Ben Flanagan helps us break down the men’s 5,000m and recaps his half-marathon debut

“My results at the Scotiabank Waterfront 10K and Manchester Road Race gave me a lot of confidence in the fall,” Flanagan says. He won both races skillfully, breaking away from his competition in the mid-stages of the race and not looking back.

Flanagan made his decision to run Houston in late November. “The timing of this race fit in perfectly in my training,” Flanagan says. “I had a lot of strength built up after Manchester, so we focused on building endurance over the past month and a half.”

Although Flanagan has shown a lot of success on the roads, he isn’t quite done with the track yet. He will be running a few 5,000m and 10,000m races this spring to secure a spot on Team Canada at the 2022 World Championships in Eugene, Ore.

When asked about when he was going to step up to the marathon, Flanagan mentioned he would love the opportunity to represent Canada in the marathon at the Paris Olympics. “Stepping up to the marathon this year might be a stretch, but I want to give myself a chance to qualify for Paris.” 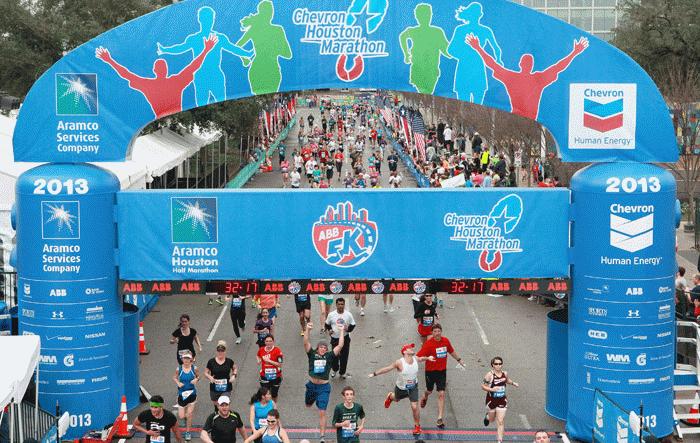 Flanagan won’t be the only Canadian elite in the race Sunday. Alberta native Rory Linkletter, who was second at the California International Marathon a month ago, is in search of another personal best in Houston. In 2020, Linkletter ran 61:44, only 16 seconds off the Canadian record.

In the women’s elite field, Calgary’s Emily Setlack returns to Houston following the 1:11:40 PB she ran in 2020.

You can view the full list of elites for Sunday’s Houston half and full marathon here.