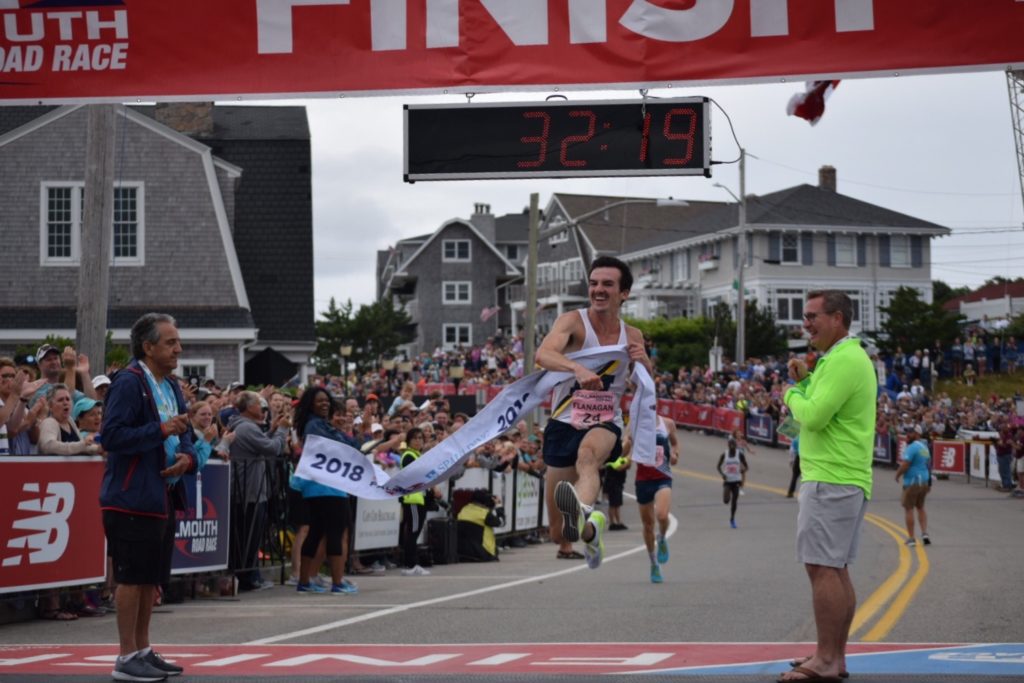 Ben Flanagan became the first Canadian ever to win the Falmouth Road Race in Falmouth, Mass., on Sunday morning in 32:21. He bested Scott Fauble and Olympian Leonard Korir, who finished second and third.

The seven-mile course draws huge fields of Olympians, elites, and recreational runners to compete alongside one another.

Flanagan has had a breakthrough 2018 summer season. Everything changed after his come-from-behind win in the NCAA 10,000m final, where he surprised fans to win the championship. He says, “NCAA’s changed my running career.”

After NCAA’s, Flanagan signed with Aurum Sports Group and started looking at the rest of the summer with his new agent, Dan Lilot. “Falmouth has been marked on the calendar for a while. Post-NCAA’s I took a week off for a mental break more than anything else. After that week I felt pretty good, so we checked out what was going on in the coming weeks.”

Flanagan says that Falmouth, Bix Road Race and Canadian nationals were his big summer goals. At nationals, Ben ended up third in the 5,000m just behind Justyn Knight, who finished second, and Mohammed Ahmed, who won.

Flanagan says he never expects to win a race. “I knew Falmouth was going to be hard. I wanted to win and knew I had a chance, but I just wanted to make sure I was in the mix at six miles, and then evaluate if I was really ready to go for it. It was all about responding to moves and conserving a little extra gas for the last 400 metres.”

The distance runner says he’s been a lot more confident lately. He’s been showing up to races ready to put himself in it, and see how it goes. He talks about the times in his career when he has tried to force confidence, when he’s had to convince himself to be confident, but Flanagan describes that it’s different now. He says, “NCAA’s changed my career. It gave me a confidence greater than I’ve ever dreamed of. I’m a lot more comfortable admitting my goals out loud and embracing them as a reality. Getting the confidence to believe that I can contend with these athletes is new for me, but it’s been a great experience. I’m trying to get used to it.”

He says he’s going into these races with a good mindset because he’s established it through experience. “It’s always cool to picture where you want to be, but its great to accept where you are in the moment as well.” And Flanagan is certainly happy with where he’s at in this moment. “Happy is an understatement. I’m living the dream right now. I’m very grateful for the whole season.”