It was an excellent day at the BMW Berlin Marathon, and not just for Kenenisa Bekele, who came within two seconds of Eliud Kipchoge’s world record despite falling back badly at the 30K mark. Tyler Hamilton of Toronto was the fastest Canadian on the course, finishing in 2:27:47.

Blaine Penny finished in 2:28:55, for second place in the M45 age category. Penny is well known for his efforts on behalf of mitochondrial disease, setting a Guinness World Record for fastest marathon dressed as a battery at last year’s STWM.  (Penny’s son Evan lives with mitochondrial disease. Penny refers to mitochondria as the cells’ batteries, giving them power.) 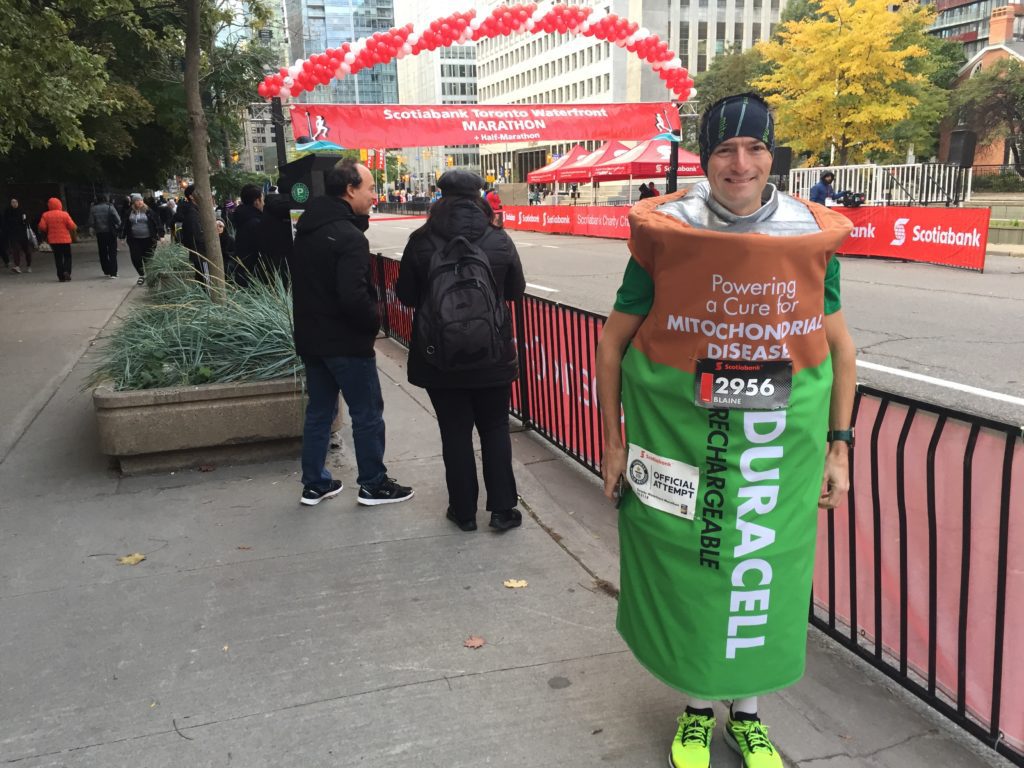 We reached Penny by text message after the race. “It was a good day running, and 2:28 was a new PB for me,” he told us. “It’s been quite the journey actually, given four years ago I ran Berlin on an injured/broken foot that took 18 months to get diagnosed as a plantar plate tear requiring surgery. Never thought I’d ever walk pain free again, let alone run competitively! I was inspired to get fit this year to put in a couple good marathons and attempt to qualify for London 2020 through the new Abbott World Major Age Group championships. I am ecstatic to have had such a good run today!”

With so many Canadian elites targetting either the World Championships in Doha or the Olympic Marathon Trials at Scotiabank Toronto Waterfront Marathon, Krista DuChene was the only Canadian elite entered in today’s race, and she delivered an excellent performance in Berlin, placing 12th and winning the master’s race and the W40 age group, with a 2:32:27.

Happy with a 2:32 and 12th at the @berlinmarathon today. Race report later today at @irunnation . Thank you for the love and support! Now to take in some views and good food. 🇩🇪🇨🇦 📷: Trevor Dickie #rollriver @speedrivertfc

Wendy Pethick of Victoria was eighth in W55 (3:18:34). (It’s worth noting that Pethick, a physiologist and Manager of the Canadian Sport Centre Pacific’s Performance Lab, had back-to-back top-10 age group results at both Chicago and New York last fall.)