At age 44, Bernard Lagat has shattered yet another American masters record. The marathoner finished in 2:12:10 at the Gold Coast Marathon in Australia on Sunday morning breaking, Meb Keflezighi’s old record of 2:12:20. 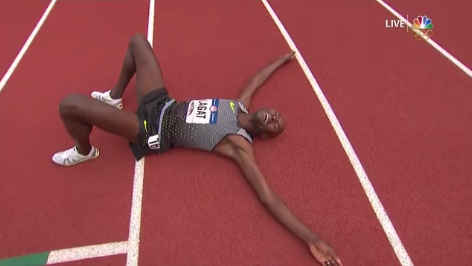 To put his time in context, Lagat was only 40 seconds shy of the Olympic standard in the marathon. He now holds every American masters record from the 1,500m through the marathon–that’s huge range. Lagat is a six-time world championship medallist and a two-time Olympic medallist.

Lagat joins the many runners who are finding serious success on the roads into their forties. Sinead Diver ran a 1:09 half-marathon on Sunday morning to win the race. Diver is 42 years old and extremely competitive internationally, running a 2:24:11 marathon in London this year to finish fourth.

Bernard Lagat now has the fastest time by a US 40+ man at every distance from the 1500 through the marathon.

Lyndsay Tessier is another (Canadian) example. The 41-year-old was named to her first-ever national team just last month and owns the Canadian marathon masters record at 2:30:47. Steve Boyd is Tessier’s coach and longtime member of the Canadian distance running scene. Boyd says: “There are two kinds of runners who do well in the masters category: runners who are great when they are young and continue to be good, and then those who are realizing their potential later in life.” Tessier is the latter.

RELATED: The rise of the elite masters runner