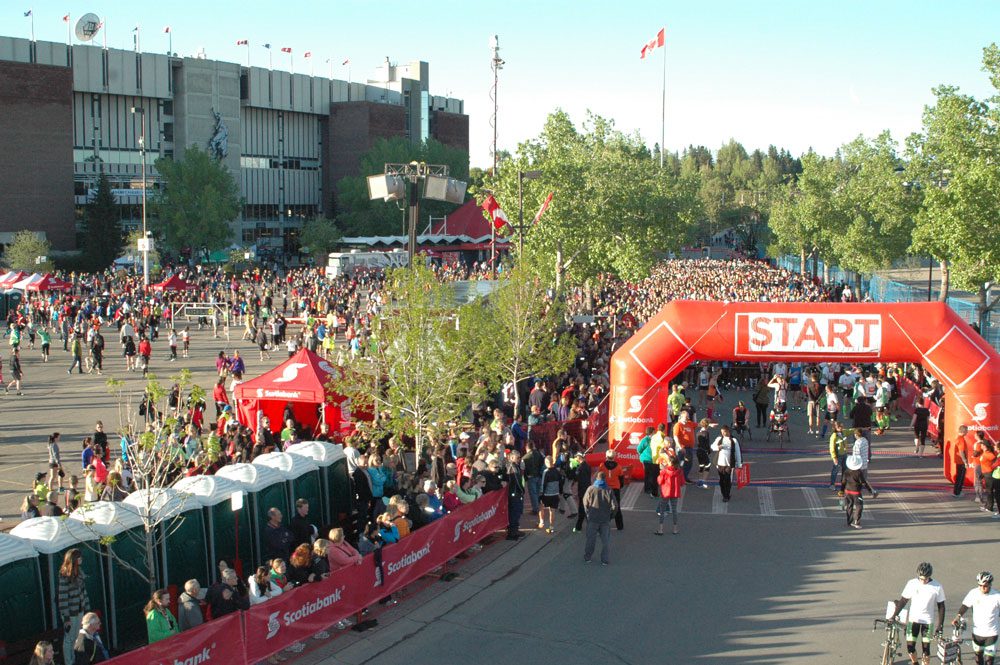 The 53rd running of the Scotiabank Calgary Marathon race weekend kicks off on Thursday, May 25, 2017 with the opening of the annual Health and Wellness Expo and Race Package Pickup at The Big Four in Stampede Park.

A special 150K in honour of Canada’s 150th, called the Altra Confederation 150KM, begins at Festival Plaza on Saturday May 27th at 6:00 p.m. Witness 75 solo runners and 350 relay runners begin a journey that will last through the night as they do 10 loops from Crowchild to Langevin before peeling off to be at the start line of the 50K in advance of the 7:00 a.m. start to complete the last 50K.

What: Health and Wellness Expo and Race Package Pick-up

This is the last chance to register for the 50KM, Marathon, 21.1KM or 10KM, 5KM or Kids Marathon. The Altra Confederation 150KM is SOLD OUT.

Visit over 60 exhibitors featuring sponsors, souvenirs, running apparel and accessories, nutritional and fitness products, samples, interactive displays, Marathon memorabilia museum and much more while runners pick up race packages. It is free and open to the public.

MitoCanada Linked Runners for Canada’s 150, PRACTICE for a special Guinness World Record Attempt (www.mitolinked150.run/) MitoCanada’s largest team will be attempting to smash the record of most linked runners to complete a marathon in honor of Canada’s 150th and as a creative way to raise awareness and funding for an important cause. The runners, some for the first time will be getting together for a special practice on Saturday, May 27, 1pm at the Stampede Grounds.  This Guinness World Record attempt will require running an entire race at a common pace, the ability to adapt to varying road conditions and the need to react to any unexpected circumstances on race day. The length of this human train will be approximately 60-70 metres or between three to four average rail cars requiring communication across the human train before coming to a full stop, for example.

Elites from across the country and around the globe will be available for interviews following a technical briefing which is at noon.

Two-time 50K Ultra champion, Justin Kurek, is attempting to run the fastest marathon in a cowboy outfit. That’s 42.2K running in jeans, hat and chaps – no boots required – finishing in under 3:09 if he wants to be successful. The current record is held by Rik Bercoe and was set at the London Marathon in 2014. Justin’s PB is 2:32 which he ran in Chicago in 2015. Giddy-up!

Attempting to set a new record: The women of MitoCanada (#tenfastwomen) are back this time trying to run a sub 3:30 for the fastest linked together marathon. They will be tied together by medical tubing and because there is no record, anything under 4 hours will be accepted by Guinness.

150 runners are attempting to run a marathon in celebration of Canada 150 and to raise awareness for MitoCanada. The catch is they are tied together with medical tubing. The group will have to finish together to be successful and complete the marathon in less than 7 hours. The current record is held by a group of 73 runners in Germany and was set in 2012.

What: Centaur Subaru Half Marathon and National Championships