The Scotiabank Toronto Waterfront Marathon will look a little different this year. By moving to a virtual platform, runners won’t be able to take to the streets of Toronto, but they will be able to make their neighbourhoods their race courses. With this in mind, Canadian Running and STWM have put together some possible routes for your upcoming virtual race and training runs in some of Canada’s major cities. With the help of our country’s best road runners, here’s where to run a virtual race in Montreal, Ottawa, Toronto, Hamilton, London, Calgary and Vancouver.

RELATED: How to nail your STWM virtual race

Myrand is a marathoner who competed at the 2019 World Championships in Doha.

Scenic course: For a 5K or 10K, it’s not your fastest route, but Frédéric-Back Park is great if you’re looking for a fun and scenic loop. Myrand says there’s a pretty steep hill, but the 5K loop is often used for parkrun runs and could easily make an enjoyable 5K or 10K course. Bonus? Runners can focus on their effort and not on dodging people or cars, as the park is very quiet. 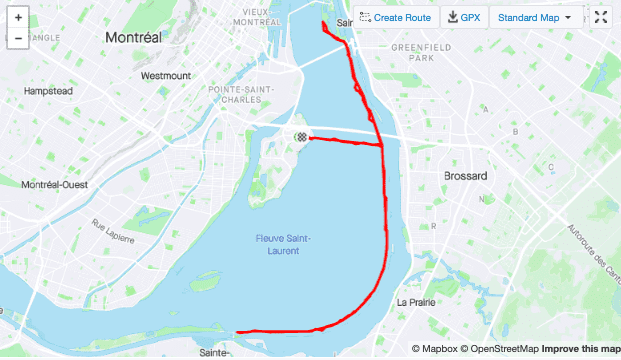 PB course: There’s a long strip of flat road that starts at Pont Champlain and runs along the St. Laurent Petit Voie du Fleuve, which is ideal for an out-and-back course and great for a 10K or half-marathon route. “Go over the bridge for your warmup and start on the route for an out-and-back,” Myrand says. 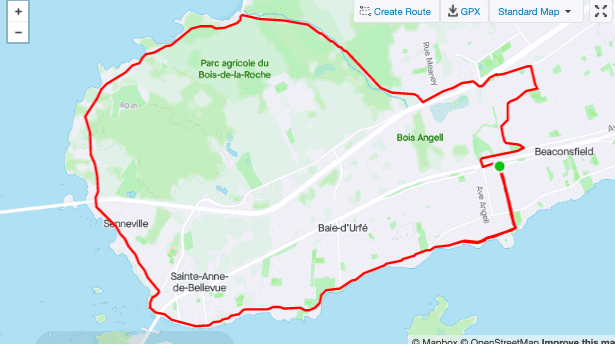 Marathoner’s course: Myrand says she runs here all the time – it’s her 30K loop of choice. “You can pretty much go nonstop here without any lights. Actually, a friend of mine recently ran a marathon on this loop. If I was running a marathon in Montreal, this is where I’d do it.”

Scenic course: The Elbow River Pathway is a shorter loop and a little hilly, but it goes through some scenic areas.

PB course: The Bow River Pathway is the spot if you really want to PB. O’Connell says if you run east, it’s a slight downhill all the way and the wind is usually at your back (so plan your run for a favourable wind day and you’ll be laughing).

Marathoner’s course: Running around the reservoir is ideal for a marathon. It’s 10 miles around, but you can make it slightly shorter or slightly longer. This would be the ideal spot for a full or half and there’s no need to worry about cars or traffic lights.

Coolsaet is a lifelong Hamiltonian and two-time Olympian in the marathon. 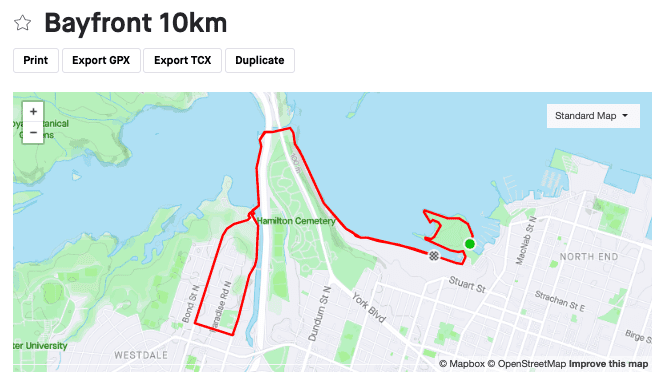 Scenic course: This route is similar to the Boxing Day 10-Miler but without the downtown portion, which only works when roads are closed. It’s closed to cars except 4.5 to 7K in the neighbourhood. There’s one uphill on Longwood road, which is the same as the Boxing Day 10-Miler. There are scenic views of Burlington Bay and Cootes Paradise, with a washroom available at Bayfront Park. 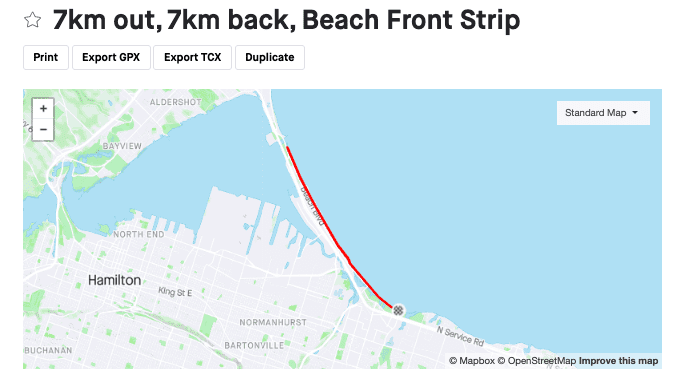 PB course: This out-and-back loop is where you want to go if you’re looking to crush a PB. It’s flat, fast and has no cars, but it can be windy. Coolsaet suggests finishing with the wind and running early in the morning, as it can get a little busy with foot traffic later in the day. 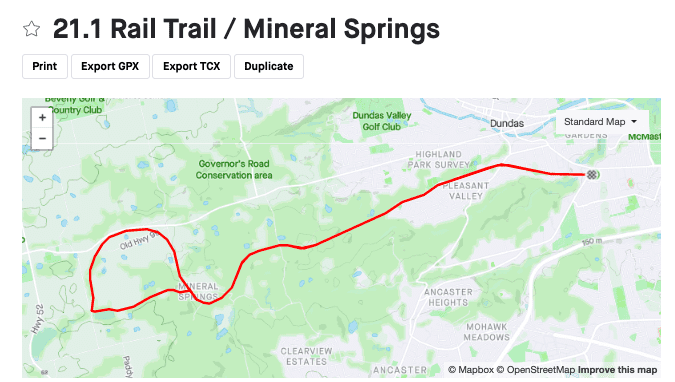 Marathoner’s course: If you’re looking for a longer route to run a solid marathon time, especially if it ends up being windy on your chosen race day, this half-marathon on the rail trail is a good idea. It’s a crushed gravel surface with a slight uphill on the way out and downhill on the way back. Turn left on Mineral Springs, right back onto the rail trail. Of course, this could also be run as an out-and-back without the Mineral Springs loop if you’re looking to make it shorter.

Scenic course: High Park offers some of the best car-free running in the city. If you’re looking to run one of the shorter distances and aren’t so concerned about finishing time, head west to HP, where the routes are a little hilly but the views are beautiful. If you’re in the east end, Sunnybrook Park also has some lovely running.

PB course: The best place to run a personal best in Toronto is on the Martin Goodman Trail. This paved pathway is quiet in the morning and has very few stoplights, especially if you’re west or east of downtown. (Avoid the downtown core.) Your best bet is to run a 10K segment of this route a little over four times if you’re running a marathon.

Marathoner’s course: Mount Pleasant Cemetery is the spot to run a virtual marathon in Toronto. Closed to cars and connecting to paths like the Beltline and the Moore Park Ravine, it’s an ideal spot. Especially if you’re running a marathon unsupported, the loops are perfect for creating your own water station. This is a possible route if you’re looking to stay in the cemetery, but connecting and extending the loop is easily done from this location. 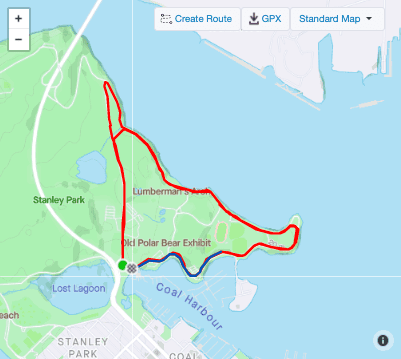 Scenic course: This Stanley Park 5K loop is the St. Paddy’s Day 5K course. Wodak did a 10K time trial here in April, which went well. There is a dedicated running and cycling lane, which means runners don’t have to worry about cars. However, while the loop is beautiful, it’s also quite hilly. 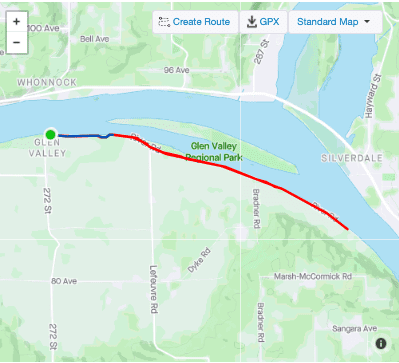 PB course: This River Road course is where Wodak ran her Canadian 10K Championship race. It’s flat and there’s hardly any traffic. It won’t be exciting, but it’s an ideal spot to run a PB. The course is about 9K out, so 18K out-and-back. 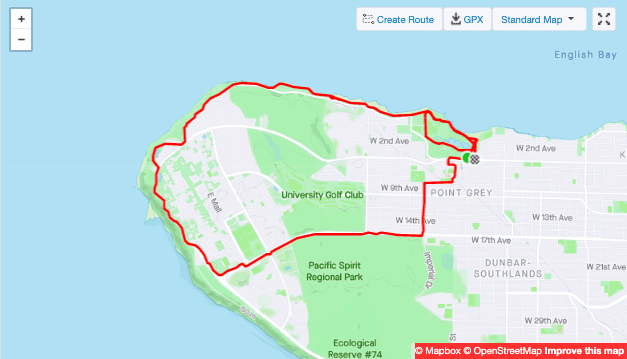 Marathoner’s course: This 15K loop is fast if runners do it on the road (they can also run on a path that sits parallel). While there are a couple of lights along the way, it’s pretty flat and long-race friendly. A 15K loop is also a good distance if you need to set up a drink station or two for yourself.

Staehli is a track runner who has run one of the fastest indoor 3,000m times in Canadian history and owns a 5K personal best of 16:08.

Scenic course: If you’re looking to get in the time and the distance on a nice course, the Thames Valley Bike Path is a great option. Bonus marks for this route: there are kilometre markers along the way.

PB course: For runners looking to PB, Eight Mile Road is the loop they’ll want. Staehli says it’s not too car-heavy, plus it’s flat and fast. There have been lots of time trials run on these country roads this summer. However, if runners are looking to run a fast time in the 10K or under, they could check out this loop, which is near a brewery to make for ample post-race fun.

Marathoner’s course: Fanshawe Lake is a great longer loop, but it’s an unpaved surface and a little technical. If you’re looking for a marathon PB, stick to the Eight Mile Road loop, but if you’re just in it for a good time, head over to Fanshawe.

Wykes is a 2012 Olympian in the marathon who co-founded Mile2Marathon. 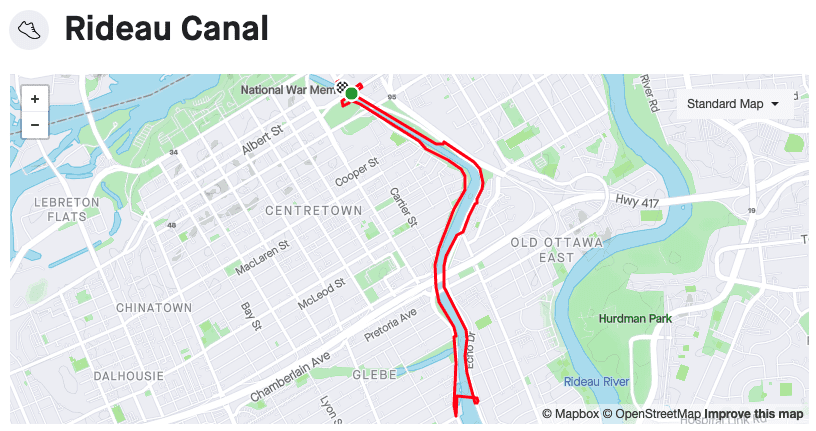 Scenic course: One of the most scenic places to run in Ottawa is along the Rideau Canal. While it can get a little busy at peak hours, if you head out early enough it’ll be calm and lovely. 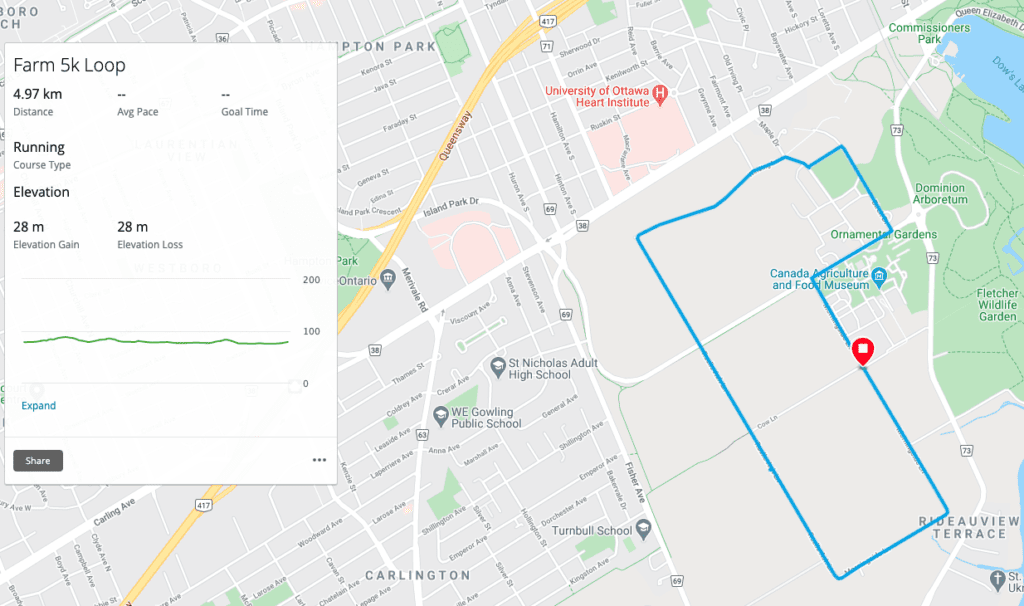 PB course: The Experimental Farm is the place to run a really fast time. There are a few hills, but they’re not big. The 5K loop is fast and low traffic.

Marathon course: This is the course that Wykes used last week for his virtual Boston Marathon (which he completed in 2:52). “If I had a little more support, I would’ve have had to go past my house, but I used a lot of the pathways designated for bikes and runners, and I didn’t have to worry about much car traffic at all. Stopping as you get later into the marathon is terrible. If Ottawa runners decide to use this course, I’ll cheer for them as they come by.”