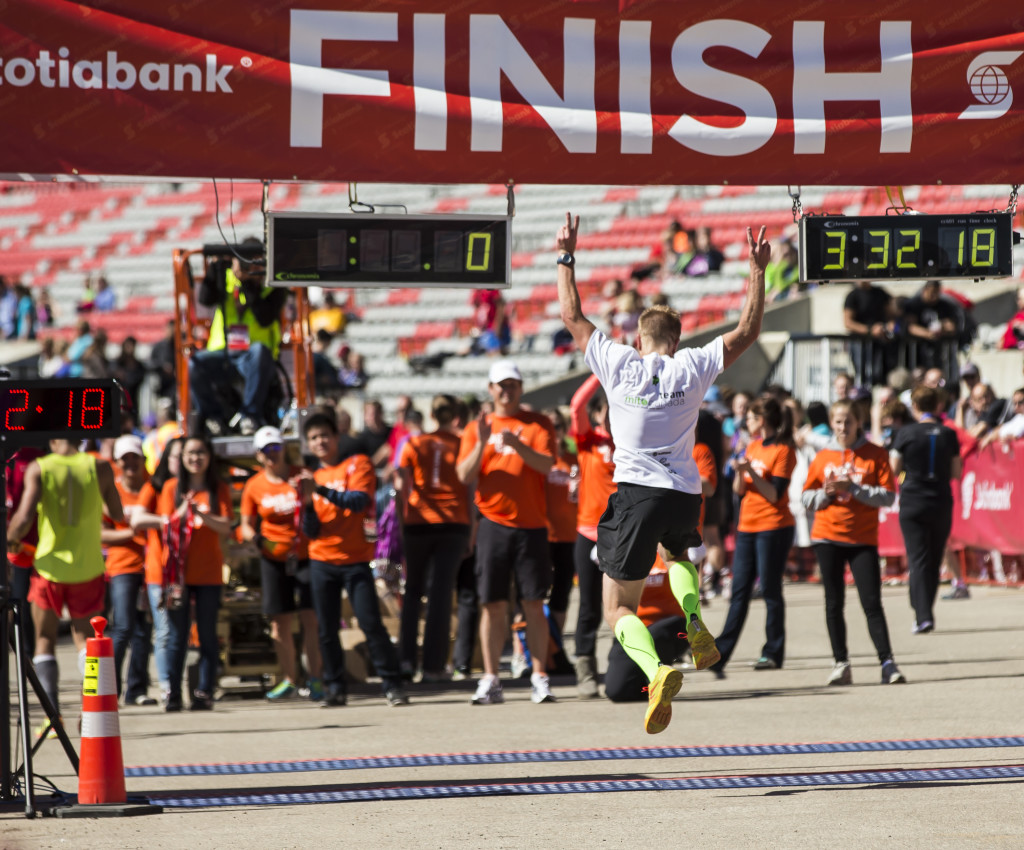 A few years ago, the historic Calgary Marathon offered participants a new challenge. To celebrate the event’s own 50th anniversary, a 50K Ultra race was offered and was embraced immediately. So much so that instead of being a one-off thing, the 50K has remained part of the Calgary race event to this day.

RELATED: A look back at the past decade of the Calgary Marathon

Once again, the event is going above and beyond it’s already exceptional offering of races. To celebrate Canada’s 150th, it’s offering a 150K ultra event for both soloists as well as relay teams.

We reached out to Kirsten Fleming, the event’s executive director to comment on the exciting things happening in 2017.

Canadian Running: 150K to celebrate 150 years. Tell us how it all came to be.

Kirsten Fleming: It began as an off-the-cuff remark at a meeting with our board of directors back in 2015. Someone joked that we did a (very successful) 50K for our 50th anniversary so why not do a 150K for Canada’s 150th Anniversary? The Calgary Marathon Society President, Dan Ouimet, who is an accomplished ultra runner, said “Yeah, why not?” and so the idea was born.

We then spent some time daydreaming, researching, brainstorming, and talking to ultra runners about how it might possibly work. We were then able to create a controlled looped course integrated in to our 50K certified route. We began meeting quietly with the city to see what we could do considering the event will run through the night on city pathways but sooner than later, it all came together.

The Race Director, Gavin Grobbelaar, has done some of the toughest ultras out there so we are fortunate to have an experienced team piecing it all together. We have also been surprised and thrilled by the reception from the running community.

CR: How many participants do you expect to take part in the event?

KF: There are currently 45 individuals registered. Two couples, one set of siblings as well as runners from five provinces. We have set a limit of 50 individual runners plus 50 relay teams which can have between two and seven runners per team.

RELATED: Runners will feel like superheroes with the 2016 Calgary Marathon finisher medals

CR: Is this a one-time thing or do you suspect (like the 50K) that it could stick around?

KF: [Laughing] Absolutely not. This is one-time only!

We never anticipated the buzz around the 50K Ultra. An online petition circulated asking us to keep it and convinced us it was a worthy addition. We knew it wouldn’t be difficult to manage because the certified route already existed. It also makes our race unique. Beer, beef and boots is a pretty cool prize for the top finishers and we have been fortunate to hold 50K National Championships three years in a row. We really love our 50K race and as long as runners do too it stays. Not so much on the 150K: that would be just nuts.

CR: Any other special surprises for 2017? What are you most excited about for next year’s event?

KF: Each year is like a child to me, special and unique and loved. One hundred and fifty may be like the favourite child you’re not supposed to tell people you have. It’s a once-in-a-lifetime celebration of our country and of our sport and we will see Canadians from coast to coast come to Calgary to run Canada’s Marathon. We have lots of fun stuff planned but I can’t give it all away! In addition to the Confederation 150K solo and relay events, Canada’s Marathon will be commemorating your marathon finish with Toonie finisher medal’s you can wear on your belt! We are also celebrating the diversity of our country through flagbearers who are coming to rep every province and territory and aid stations which will be themed for each province and territory — it’s been so much fun to plan and we can’t wait to share it with 15,000 of our Canadian neighbours on May 28th.