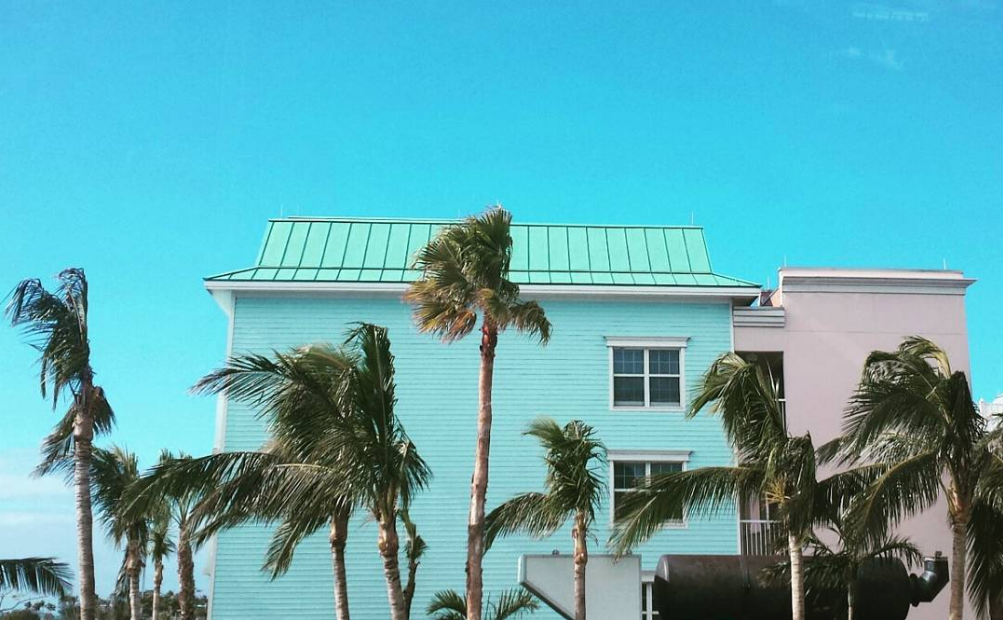 From my spot on the race course, I get the best sunrise view. The palm trees look black against the citrusy yellow backdrop and with the morning sky getting brighter, I’m starting to get a better look of the water in front of me. At this point, I’ve been up for hours but the day is just starting. Most runners (particularly those who race) are accustomed to these early morning hours. Hours earlier, we rose well before dawn, I funneled coffee into my water bottle and then left the hotel just as the last Saturday night partiers dribbled back to the lobby. Now, I stand with a vacation home at my back, sparkly Caribbean water in front of me and the Marathon Bahamas race course sandwiched in between. I focus on the road watching for Canadians to run by.

Minutes later, Canada’s first woman in the half-marathon runs effortlessly past. This Vancouver runner is accompanied by her husband and a couple friends for her week on Paradise Island in the Bahamas. Most of them are out on the course and afterwards, they’ll stick around to explore the island. Caribbean waters are enough to pull anyone out of a winter rut in mid-January— so I think anyway.  I’m not surprised that there seems to be a growing number of runners talking about heading south to combine their passion for running with some well-needed days soaking up the sun by a turquoise waterfront. 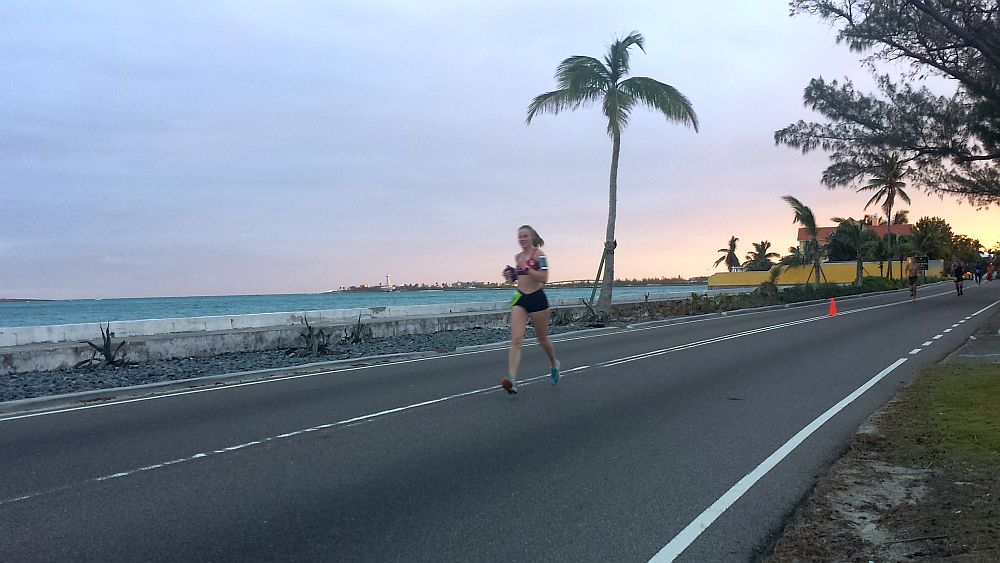 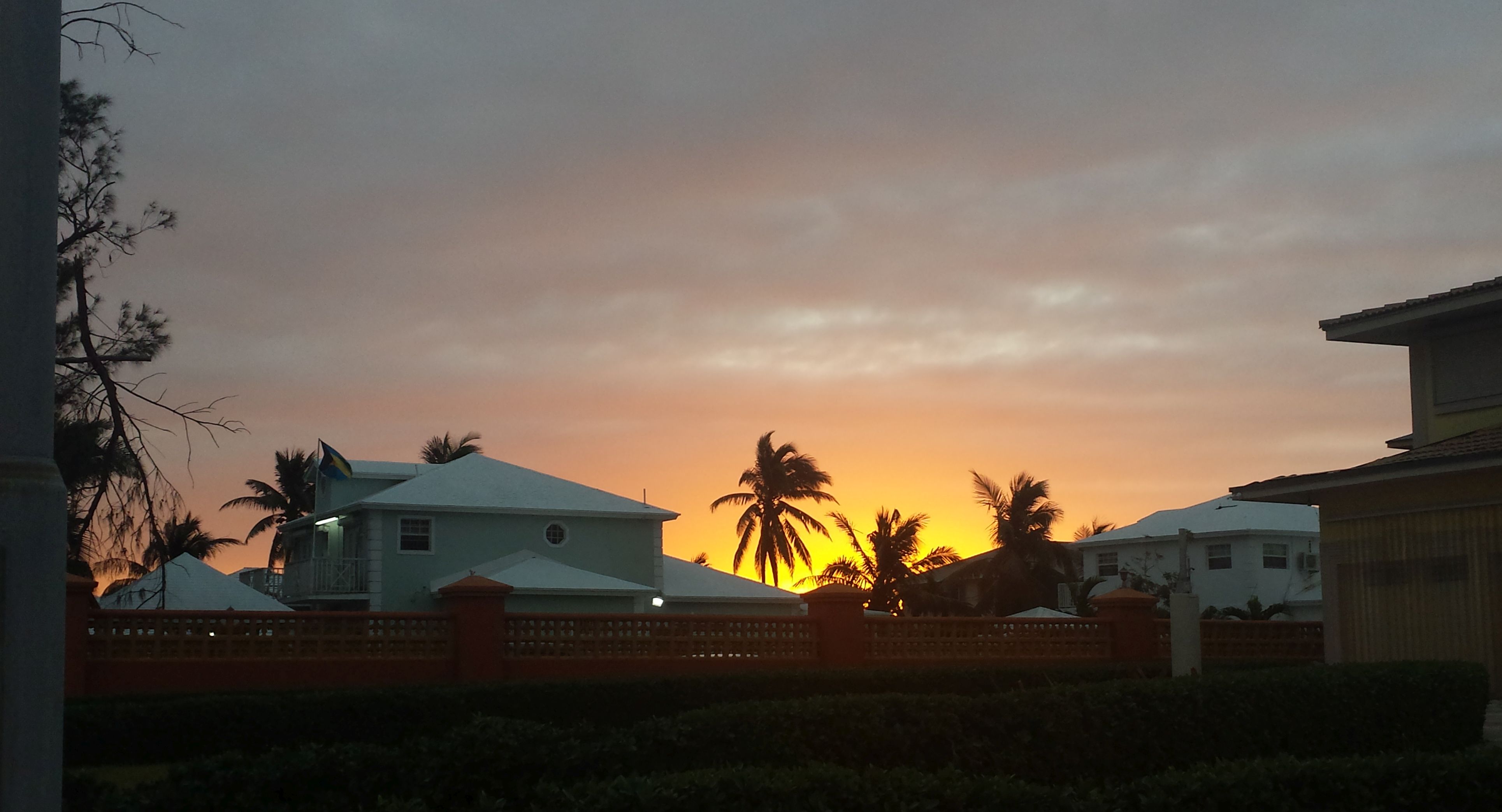 I fly out of Toronto on Friday afternoon to take in the race. Swapping winds that freeze my cheeks for humid air is a welcome trade at this time of year. There are 700 islands that make up the nation of the Bahamas. These pieces of land are scattered down through the Caribbean. Actually, they go much farther south than I thought— the southernmost island sits just off the coast of Brazil. For four days smack in the middle of January, I’m getting the chance to see one of them: Paradise Island. It’s the home to the capital Nassau and, of course, it’s also the island that hosts Marathon Bahamas which, in 2017, is in its eight year. 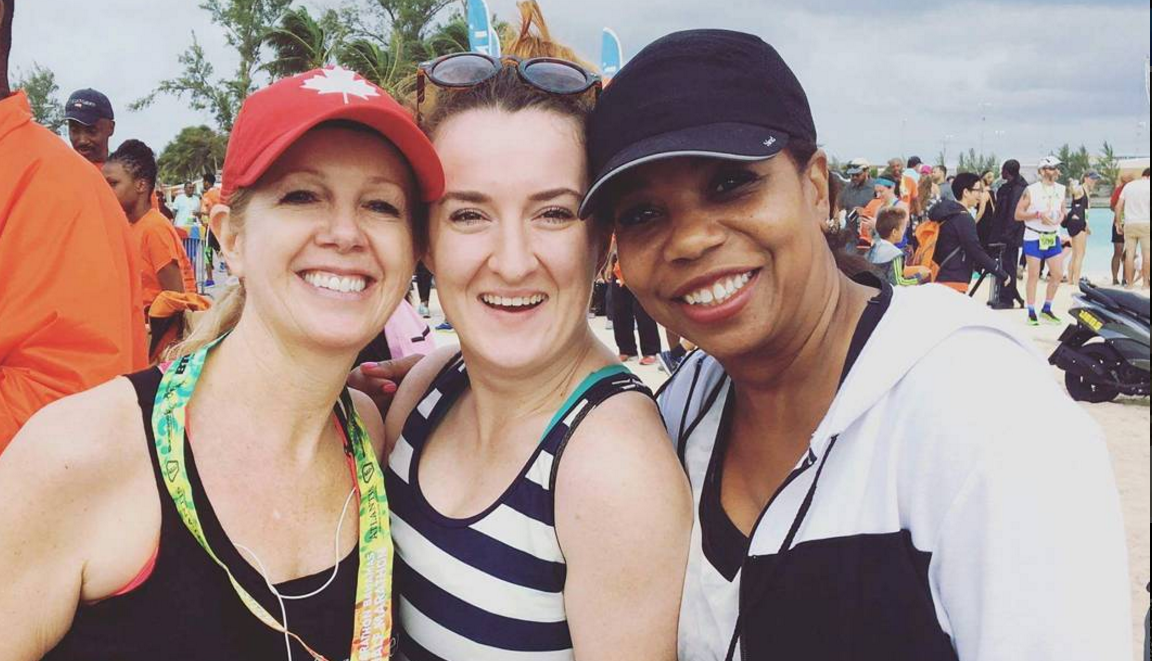 The race course takes runners on a nice tour of the 21-mile long island starting on Junkanoo Beach and leading past palm treed beaches, breezy sea-side strips and tropical coloured homes. For the competitive runner, the full marathon is also a Boston qualifier. The half offers a nice tour of the island for the distance runner who isn’t necessarily on board for the full 42.2K on vacation.

As runners pass by one after the other, a cluster of locals stand in a line metres away from the pebbly beach and dance to music booming out of their car. Some tired runners pick it up, perhaps absorbing the energy of this cheerful group. Watching the stream of runners fly by, it’s clear the race is made up of a blend of both locals and vacationers. Some are donning running apparel that only a true Bahamian could pull off while others flaunt their Canadian identity with maple leaf emblems printed on shirts and hats. I note that the weather is ideal for racing. I wondered if the Caribbean sun would sear runners leaving them to plodding along slowly in the heat, but that’s not the case— as they run through this postcard pretty course, a gentle breeze comes off the water.

READ MORE: How to avoid ghosting your running routine on vacation

READ MORE: Why run on vacation? 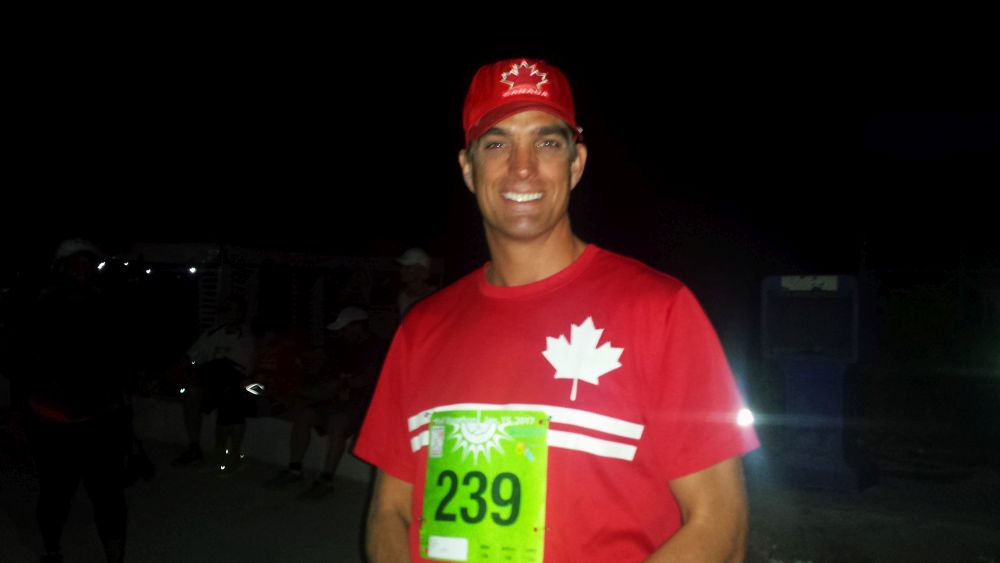 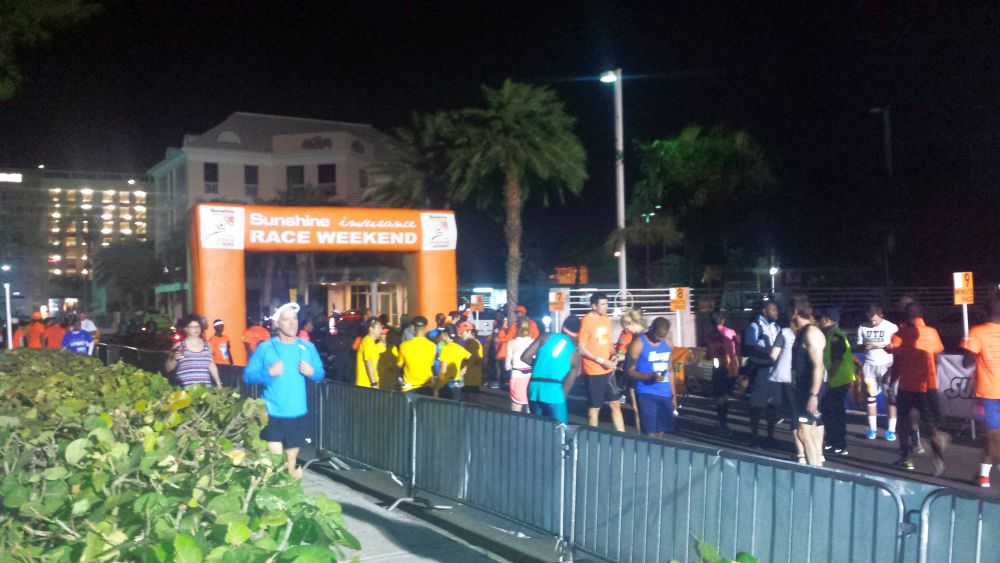 If the full or half-marathon is a goal that seems lofty for a getaway to the Bahamas, there’s an easily manageable 5K. Saturday morning, runners rise early to run the shortest distance on the race weekend itinerary. That brings runners from Montagu Beach over a bridge and finishes at a stage where live music blares. Runners at that start line pass under the bright orange arch knowing that they’re running to raise funds and awareness for breast cancer— one of the nation’s most prominent cancers and a medical concerns that’s a major priority.

Chatting to runners during this weekend in the Caribbean, it’s obvious that everyone has left Canada’s borders to enjoy the toasty sunshine. They’ve signed up for the race and come ready to run. Afterwards, they stick around to find out what the Bahamas has to offer. I’m getting a quick snapshot too so after accidentally taking my “leisurely” 5K too speedy, I figure it’s time to indulge my inner traveller. 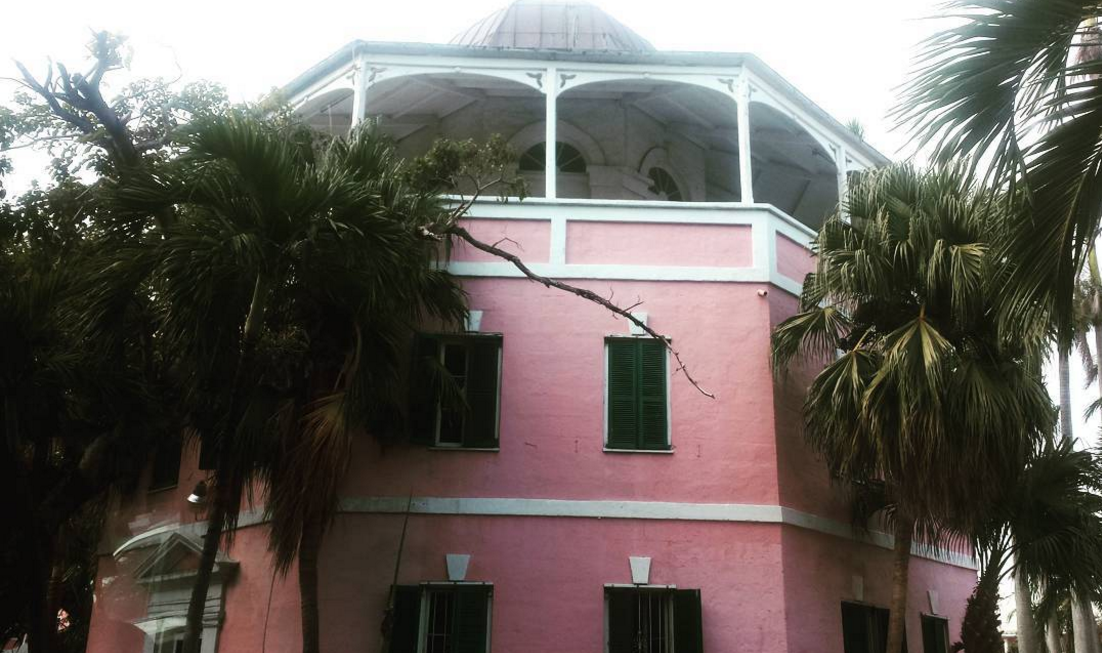 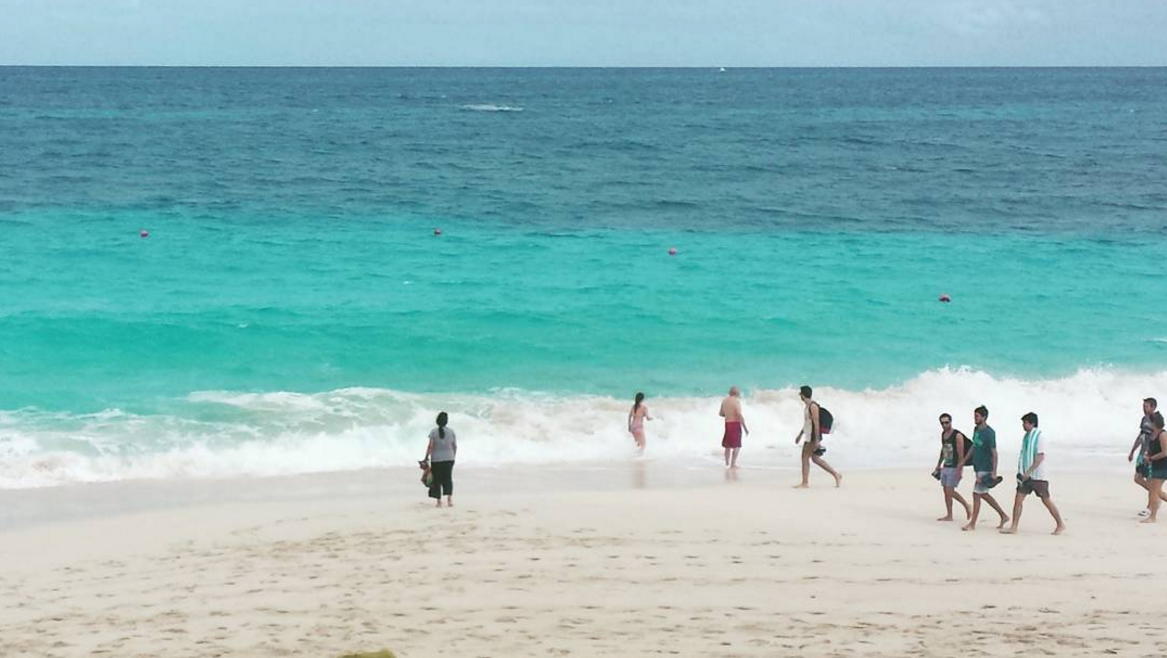 For me, that means sampling local food (plenty of it), lounging on the sandy beach, renting a jet ski to spot shoreline mansions, and taking a guided tour of the island. A tour is perhaps the wisest activity that a runner can put on their itinerary— either the day before or after their race. Tired legs get a chance to recuperate and I get a chance to learn a little bit more about the island. A few pieces of trivia that I learn: the national bird is a flamingo, some of the structures have been standing here for quite some time (a church on my left, for example, has been in its spot since 1802), and the peony pink library down the street was a prison in a former life. While fitness buffs are drawn to this tropical location, so too are iconic celebs. On the jet ski, I spy Oprah and Tiger Woods’ beachy vacation homes. And Bob Marley, one of the kings of the Caribbean, used to have a getaway home down here too.

Of course though, our travel experiences wouldn’t be half as rich if it weren’t for the new flavours we discover and we runners have the advantage of being able to burn through meals rather quickly. Bahamian people have reason to brag about their cuisine. After my race, I sit at the Poop Deck restaurant on the island and indulge in puffy cheesy macaroni noodles (an island favourite) hush puppies and salty, freshly caught shrimp that tastes like the ocean. 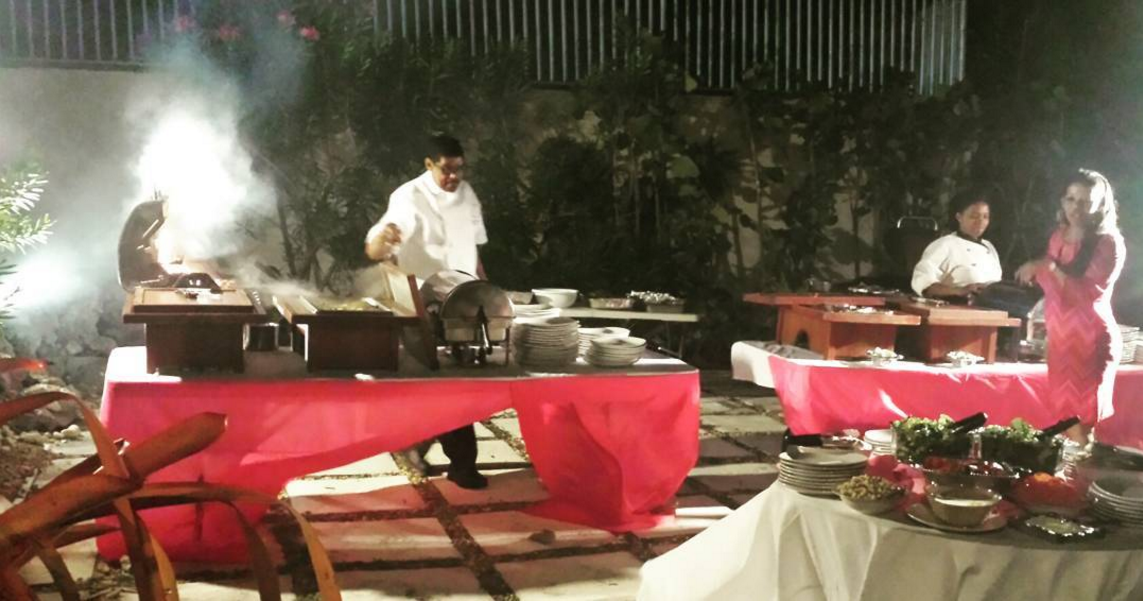 But it’s on my first day on the island, not long after arriving in from Toronto, when I visit the home of Franklyn Wilson, the director of the race. It’s at his pre-race cocktail party that I first get a feel for the food of the Bahamas. The seafood pasta and barbecue cookout smells as good as it tastes, but what impresses me the most is what’s inside the tinfoil pouch placed on my plate. Parcelled in foil, this dish is called conch. I open it up: steamy, salty white fish cooked in peppers  and fresh veggies with a buttery taste flakes apart in my mouth. Where has this been my whole life?

How lucky are we to have a passion like running that invites us to go all over the world and explore the homes of others? We keep our bodies fit not only to clock record times in our races, but also to satisfy a curiously and need to explore. As runners, our bodies become a vehicle to explore new land and terrain. I make note of this as I reluctantly leave paradise.