Terri Biloski of St. Thomas, Ont., is the first official finisher of Laz Lake’s Great Virtual Race Across Tennessee. Of the nearly 20,000 participants, Biloski was the first named participant to get it done, in only 11 days and 20 hours. That means the runner covered an average of 85K per day for nearly two weeks straight. (Note: the first finisher was someone who goes by Gingerbread Man, but their actual name is unlisted).

The event, which sees runners travel virtually on foot across the state of Tennessee (roughly 1,000K), has 18,999 registered runners. Participants have four months to tackle this behemoth of a race, and if they finish with enough time to spare, they can go for the out-and-back route and complete an additional 1,000K (this would require averaging 16K a day for four months).

Biloski was running in support of the Huntington Society of Canada, and her goal is to raise $1,000. She’s currently at $575, and on the run back, she hopes to raise $2000 total. She says she officially decided to go back after she finished the first 1,000K. “I wanted to do really well on the first 1,000K, so I saved the decision about the return trip until after I was done.” 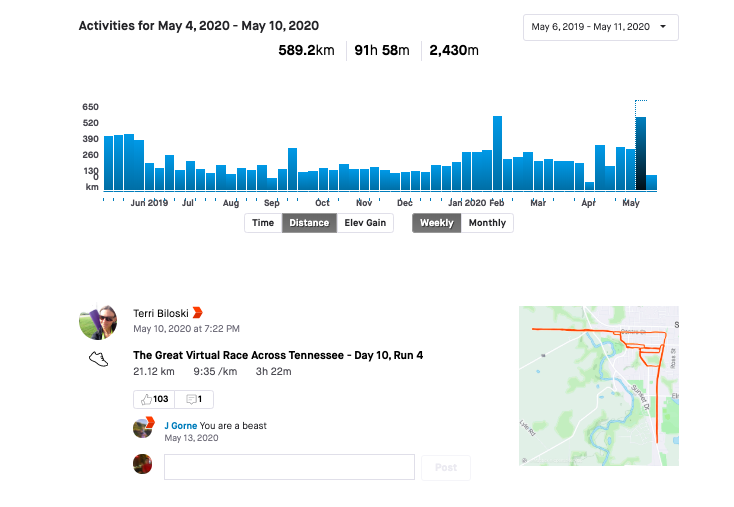 She started right away

It’s clear that Biloski’s goal was to be the first one done, as her start time of run number one was 12:10 a.m. on May 1, 10 minutes after the race began.

She rarely took an entire night off

Over the course of her nearly 12-day event, Biloski only took three nights off, and one of those nights was really more like a morning. Her second-last run started at 4:42 a.m. on May 12 and her last run began almost 12 hours later, at 3:19 p.m.

In terms of her food intake, she’d have proper meals if she was going to take a nap, and if not, she’d opt for some oatmeal or potatoes. “Dinners would be be stir-fry or pizza. Things with lots of veggies and carbs to keep me going.”

She recruited a friend

The runner had a friend join her for a few runs, Shelly McGregor, whose Strava titles were things like this: Joining my dorky friend for a few miles 6ft apart the whole time.

She kept the pace moderate from the gun

This isn’t her biggest week of running

For most, a 589K week is unthinkably high mileage, but for Biloski, it’s not even her biggest week of 2020. The runner completed 601K from January 27 to February 2, when she completed her 44-hour birthday run. She says she got into ultras by running with her athletes.

“I figured if I can run this much every day, maybe I can pull it all together and do some ultra races. That’s how I got into the ultra scene. I was doing the distance anyway, so first I tried to race a 100 miles and eventually I got up to six days.”

I thought I’d share some landscape pictures today. And one selfie because it’s the only picture I took on the trail yesterday. Lots of dirt roads, some pavement and a spectacular moon last night. And I’m well over halfway at about 562km. https://p2p.onecause.com/racehd/terri-biloski #GVRAT1000K #cureHD #letsrunstthomas #huntingtonsawareness

Biloski has officially begun her return trip, which she plans to take a lot more time than the first 1,000K.