Though John Astley Cooper, an English vicar, is usually credited with inventing the Commonwealth Games, it was a Canadian, Melville Marks “Bobby” Robinson of Hamilton, Ontario, who was the driving force behind the games’ 1930 debut in that city.

According to Brian Oliver, writing for InsidetheGames.biz, it was Robinson’s brash style and business know-how that actually got the games off the ground, rather than languishing as an idea, even if the idea was initially Cooper’s.

RELATED: Commonwealth Games: How (and when) to watch

Raised in Peterborough, Ontario, Robinson became a newspaperman, joining the Hamilton Spectator in 1908 and working his way up to sports editor. An outgoing man with a flare for organizing people, he became deeply involved with the city’s business elite, and was one of the founders of the Hamilton Olympic Club.

According to Oliver, Cooper’s idea (decidedly politically incorrect by today’s standards) was for an international sporting competition to demonstrate the dominance of English-speaking nations. But Robinson was so upset by what he perceived as the preferential treatment of the American team at the 1928 Olympics in Amsterdam (at the expense of the Canadians) that he started to mobilize his contacts to create an Empire games that would exclude the U.S., even threatening to boycott the Los Angeles Olympics in 1932. (For example, there was no Canadian flag with which to fete sprinter Percy Williams’ victory!) 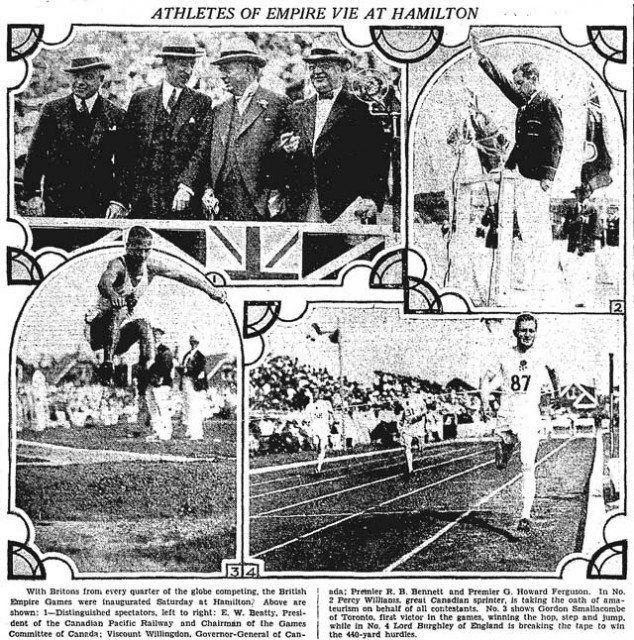 Robinson persuaded the city of Hamilton to build a swimming pool and invest in other new infrastructure to support the games (despite the Depression), and moved the Hamilton Olympic Club into Civic Stadium, which held 20,000 people and was expanded to increase capacity for the 1930 games. He also had to win over the British, who, though they were previously quite happy with the Olympics and saw no need for another spectacle of sport, decided to get on board at the last minute, thanks to Robinson’s enthusiastic diplomacy.

The games were dominated by Canadian sprinter Percy Williams, who had won double gold at the 1928 Olympics, and set a new world record in the 100m the week before the games started in Hamilton.

The games were a huge success for Hamilton, for Canada, and for international sport, and their future was sealed, thanks mostly to Bobby Robinson.