Canadian ultrarunner and treadmill-running world record-holder Dave Proctor of Okotoks, Alta. will finish the Great Virtual Race Across Tennessee today, 15 days after he began. He’ll become the fourth official finisher of the event. Proctor was initially planning to attempt a new speed record across Canada (67 days from coast to coast), beginning Monday, May 16 in St. John’s, Newfoundland, but due to COVID-19, pivoted to running Laz Lake’s GVRAT. The first official finisher of the event was Terri Biloski of St. Thomas, Ont., who closed out the 1,000K on May 12.

Proctor says he was initially trying to get this race finished in 10 days, but was finding running coupled with fathering to be too much. “When you’re running those kind of miles, if you’re not running you’re eating, and if you’re not eating you’re sleeping. It’s hard to run 100K and be there for my family. So I decided to only do 50K days after day seven.” The race took Proctor 15 days instead of 10, but he’s happy with his decision.

After he finishes his first 1,000K today, he plans to begin the journey “back” as Laz calls it. Proctor says that he always feels fitter at the end of these long runs, and he wants to keep going. “I’m training for Big Backyard Ultra, which will hopefully happen in October, so I’m going to be running anyway, so I might as well do the trip back. I hope to win Backyard Ultra.” 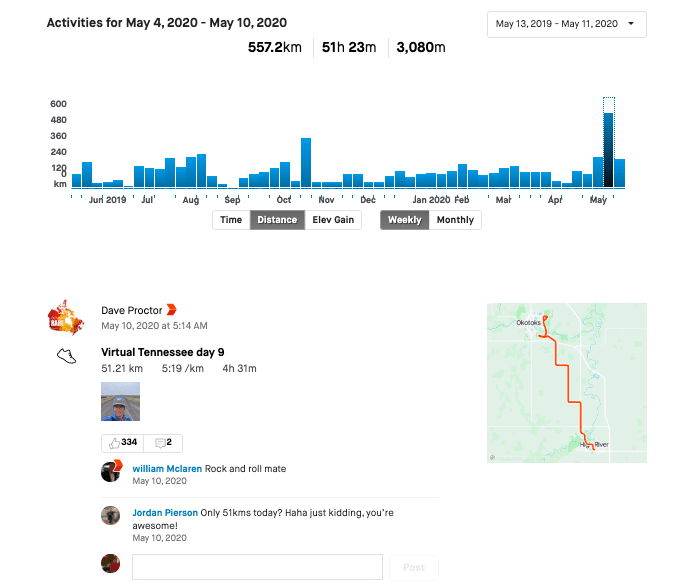 Proctor says there are two ways to do well in these races, runners can either run fast or be relentless. He describes Biloski’s approach as relentless: “She was running for, like, 20 hours a day, whereas I’m running faster, but taking much longer breaks between runs than she did.”

Proctor also encourages people to have fun with this kind of a challenge. “It’s not really a race. This morning for example, I ran to my parents’ and had coffee with them from a distance. It’s nice to fit that stuff in.” Proctor also stopped mid run today to do a TikTok dance with his 14-year-old daughter.