In what was the race of the weekend at the Pre Classic, Olympic champion Elaine Thompson-Herah ran a 10.54 to become the second-fastest woman of all time over 100m. U.S. sprinter Sha’Carri Richardson finished last in a field of nine runners in her return to the track after a one-month ban due to marijuana use.

Not bad for a diamond league season 100m opener. New PB, NR, DLR second fastest time ever. Thank you all so much for the love and support. Continuous improvement is the order of the day. ? #Hiswill #HisGlory #HistoryBooks #Faith#Fearless pic.twitter.com/MAWniHKgKh

RELATED: Why is marijuana prohibited in sports?

The women’s 100m results were a repeat of the podium from the Tokyo Games, as fellow Jamaicans Shelly-Ann Fraser-Pryce and Shericka Jackson finished second and third. Richardson’s time of 11.14 seconds in the 100m was well behind winner Thompson-Herah, who ran 10.54 seconds for the second-fastest women’s time in history, behind American Florence Griffith-Joyner’s world record of 10.49 in 1988.

There was plenty of drama going into the race as Richardson has run the sixth-fastest time ever, despite not being able to compete in Tokyo. The Pre Classic marked the first time she would face the previous Olympic 100m champions.

After the race, Fraser-Pryce and Jackson were caught laughing at Richardson during her interview with NBC Sports. Richardson later made the image her Twitter profile picture. 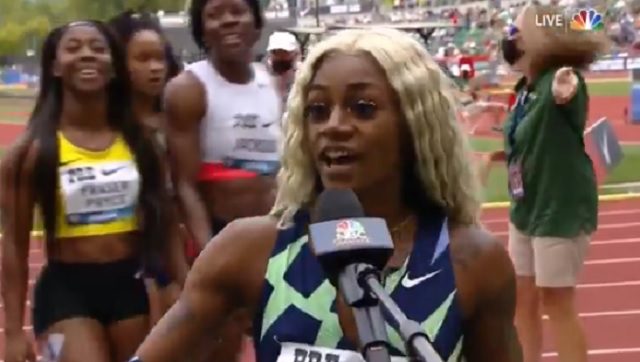 “Count me out if you want to,” Richardson said in a post-race press conference. “Talk all the s— you want, ’cause I’m here to stay. I’m not done. I’m the sixth-fastest woman in this game, ever. And can’t nobody ever take that from me. Congratulations to the winners. Congratulations to the people that won, but they’re not done seeing me yet. Period.”

Haters can talk but y'all STILL watching! pic.twitter.com/5CBMCNCSnI

Richardson withdrew from the 200m.

The three Jamaican medallists will next be on the starting blocks together at the upcoming Diamond League meet in Paris on Aug. 28.