Saturday morning in Vienna, Austria, Eliud Kipchoge made history. Kipchoge has become the first person to run a marathon in under two hours. Kipchoge finished the historic event in 1:59:40.

The Ineos 1:59 was a beautiful event. The weather was nearly perfect, a little rain (but mostly overcast), with moderate temperatures. Kipchoge was wearing Nike shoes specially created for the event, and his team of pacers executed the race perfectly.

Note to Nike: it's (way) better when you invite the fans #INEOS159 pic.twitter.com/4tUcvEx8L8

Each group of pacers had a team captain. The new runners would slip in as the other team slipped out and keep Kipchoge on sub-two hour pace. They would know if they were succeeding based on feedback from a man on a bike and a green laser that was being projected from a race car that drove on pace ahead of the flock of runners.

Each pacing group consisted of seven runners who surrounded Kipchoge (five in front and two in back), to reduce wind resistance and provide a morale boost and ensure the pace never got stale.

Through halfway, the runners were right on pace, coming through at 59:35, well ahead of Kipchoge’s 59:57 half at Breaking2 in 2017. The runner clicked off 1K splits like a metronome, never deviating from his 2:50 pace by more than two seconds.

⏱️INEOS 1:59 Challenge | 📈@EliudKipchoge’s splits so far are what you would expect – incredible.

He’s on course to make history but we've had some rain and the next 10km will be crucial.

Race commentator Shalane Flanagan, one of the most decorated runners in American running history, said that Kipchoge’s preparation looked different for this race than events previous. She said on the broadcast that he started a strength programme and upped his mileage to about 120-140 miles a week. 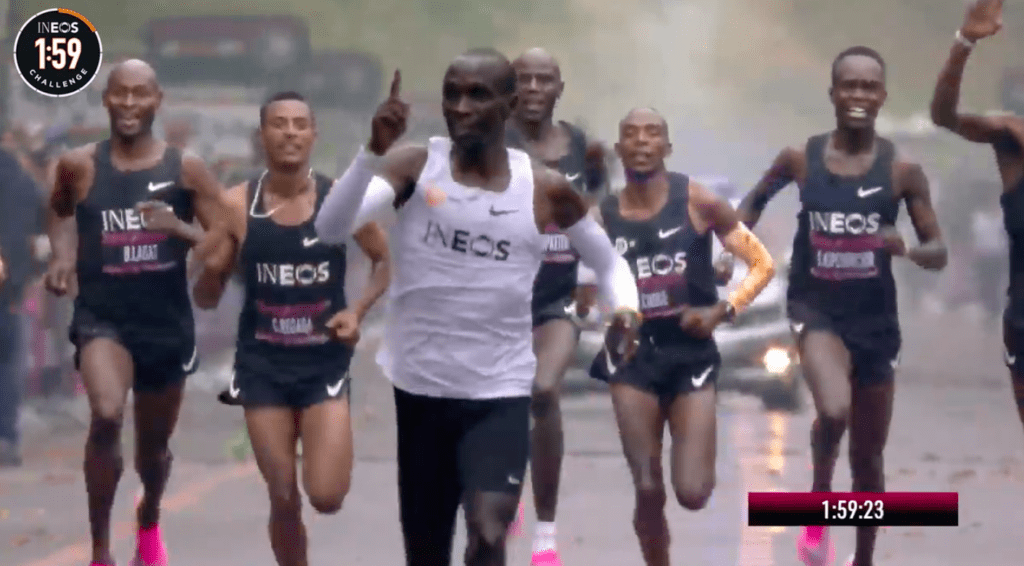 There were no fans allowed on the course for the Breaking2 Project two years ago, but this version drew crowds of roughly 20,000 people, which may have been a huge factor in the success of the event, since Kipchoge is known to feed off spectators’ energy. Matt Centrowitz, one of the pace captains, said it felt like an indoor track, it was so loud and everyone felt very close.

But it wasn’t just the 20,000 people on site who were cheering. Fans across the world stayed up late and woke up early to see the historic attempt, with the stream hitting nearly 700,000 viewers. With 2K to go, a smile started breaking out across the stoic runner’s face–he knew he was about to make history. Congratulations to Eliud Kipchoge on a monumental run on Saturday morning.