Newcomers and returning runners alike were ready to celebrate at Toronto’s Pride and Remembrance run on Saturday. The winner of the 5K race, Eric Bang, ran a speedy 14:54, followed by Kyle Stolis with 16:01, and Kevin Smith in 16:08. Women’s finishers were led by Victoria Siemon, in 17:24, Quinlan Hickey in 17:38, and Sophia Walter in 18:41–however, due to an error, the race did not collect any gender or age data. Most of the 5K and 3K events were there to participate in the experience (this was the 26th year for the race) rather than pull off a PB, and the mood was celebratory.

After a two-year in-person hiatus, emotions were high as runners returned to the streets. This year’s race garb featured some fantastically colourful items, including the race shirts designed by Richard Kuchinsky. The brightly-hued event matched the high level of enthusiasm. 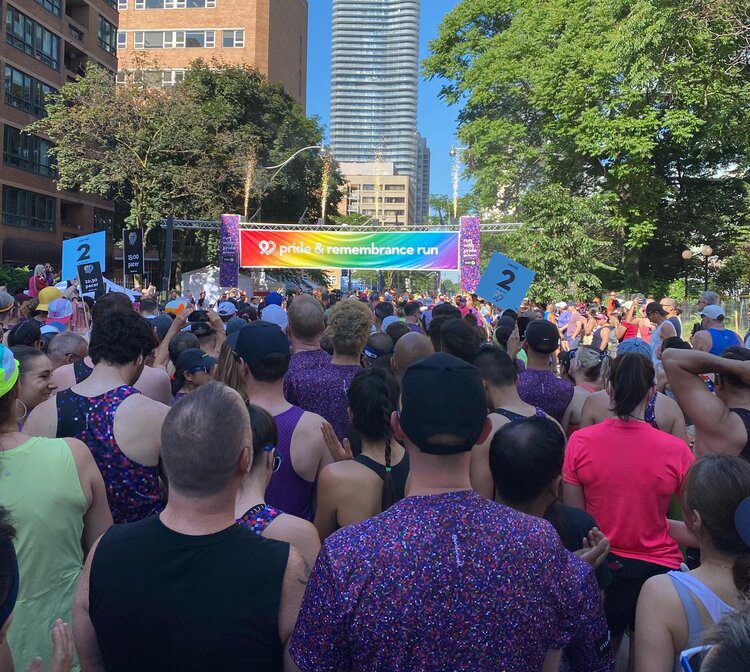 The Pride and Remembrance 5K and 3K run and walk contributes 100 percent of its fundraising to non-profit organizations supporting LGBTQ+ causes. As Pride run ambassador Richardt Scholtz says, “the run is so much more than just a race. It’s a celebration, and an opportunity for the community to show love, support, and raise funds to help others.” While those participating in the run clearly had a fantastic time, with a well organized event and after-party, the sentiment behind the Pride run is clear: celebrate, and support. The Pride run is the only athletic event during Pride week and is touted as “the largest, long-running and most fun pride run in Canada” by the Pride Toronto website.

The Pride and Remembrance Association organizes the run completely through volunteers and shares the motto, “We remember our past to build on our future. We are community-focused.” The association was founded in 1996, and since then has raised over $2.4 million dollars for LGBTQ+ charities.