Only in Hamilton is the grim reaper greeted with relief. Appearing just past the top of the longest of many hills in the last 10K of the Around the Bay road race, it means the finish line will soon be in sight.

The reaper has become one of the best-loved features of the race. “Tim the Grim,” as he is also known (only his friends know who is behind the black cloak and face paint), stood at his usual spot on York Blvd. yesterday, about 2K from the finish line.

RELATED: A conversation with Around The Bay’s Grim Reaper

Encouraged by friendly insults like “Next year you should TRAIN for this race,” “Only 22 kilometres to go,” and “Shortcut to the finish line, right here” (pointing towards the adjacent cemetery), some runners stop for a selfie or a hug. Those chasing a time goal just keep on going. 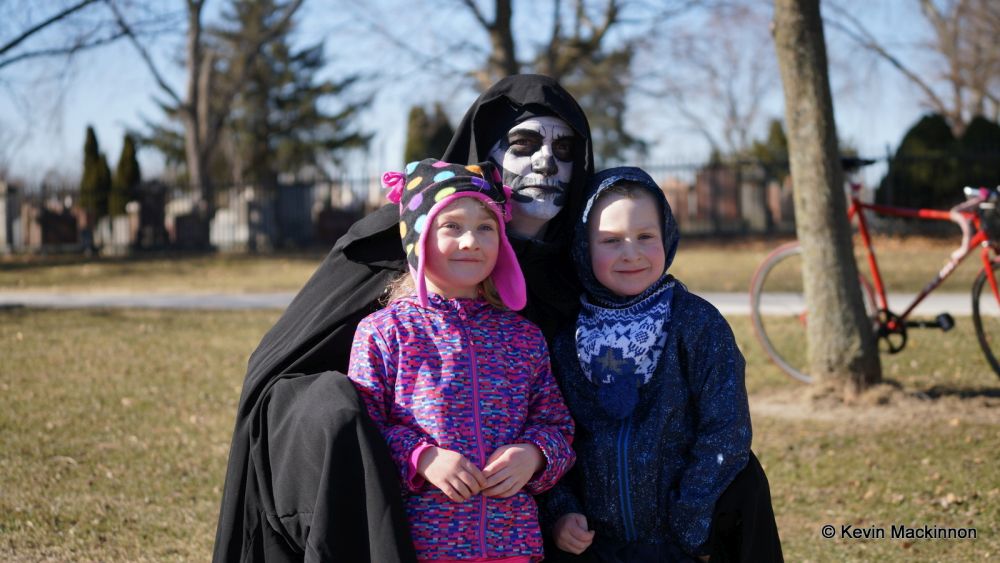 “Every year people thank me for being out there,” says the reaper. “This year, one guy stopped to tell me he recently went through prostate cancer. I was really inspired by that.” He tries to stay out there until the last straggler has finished, which means standing for five hours, give or take.

He considers it part of his training. The reaper has been a dedicated runner since high school, and in the last few years has taken up running trail ultramarathons. His next race is a 500K trail ultra called The Last Annual Vol State, held in Tennessee in the heat of July. The race was created by Lazarus Lake, the same guy who created the Barkley Marathons, the notoriously difficult 100-mile (160K) race held this weekend, also in Tennessee, which had no finishers. (Canadian Gary Robbins went home disappointed for a third time, having completed three out of the five 20-mile loops required to finish the race.)