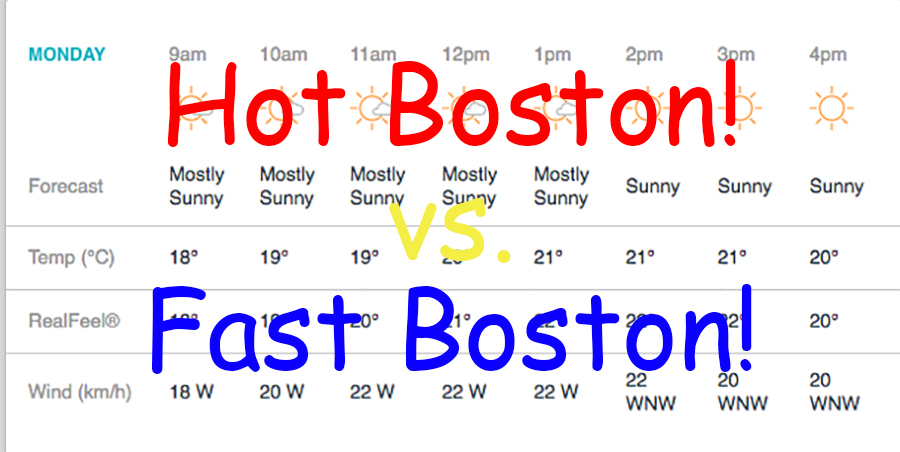 In 2011, a fierce tailwind in Boston produced the fastest marathon in history (at the time). Kenyan Geoffrey Mutai scorched the course in 2:03:02, revealing the once-thought-of challenge point-to-point course as lightning fast. There’s a lot of talk about the infamous Newton Hills, finishing with Heartbreak Hill at about the 32K mark of the course. But the first half of Boston is decidedly downhill, and even after battling up Heartbreak, runners finish with a net-negative descent of about 470 feet.

So when the winds started to gust from the northwest here in Boston over the weekend, talk of 2011 started. That edition of the race actually produced not just a phenomenal time (not considered a world record because Boston is a point-to-point course), but also the three other fastest times in the race’s long history. Mutai’s time still stands as the second fastest marathon ever run.

The only catch: it’s also going to be warm. Potentially really warm, by marathoning standards.

As I write this on Saturday evening, Boston is experiencing a sudden burst of summer like conditions. It’s 29 C and the sun is beating down like a mid-July afternoon.

Research shows that marathons times, from elites on down, are deeply effected by temperatures above about 15 C. According to Accuweather.com, the start temperature will be a balmy 19 C, with a 32km/hr wind from the west. The Hopkinton-to-Boston course is angled ever so slightly from the southwest to the northeast. That means that runners should feel that wind mostly carrying them, but also slightly to their left side, particularly from the halfway point to the Newton fire station, when the course veers more to the north.

The last 10K of Boston is actually pretty gentle, allowing runners with gas left in the tank to cruise through the gradual downhill final section before entering Boston-proper. This stretch is almost entirely heading dead-west to east, so the tail wind, which will pick up to about 35km/hr, will certainly produce a fast finish for those ready to run hard.

But because Boston starts at 9:32 a.m. (for the elite women) and 10:00 for the first wave (including the elite men), runners will have to battle the heat as they run into midday. The winners will cross the line with the temperature at about 21-22 C and lots of sun. Much of the latter half of the course is also exposed, so hydration will be a factor.

Will we see runners take advantage of a super tail wind and sail into the record books on marathon Monday? Or will the heat stamp out those who get greedy in the relatively downhill first half? We’ll find out on Patriot’s Day.

Times to watch out for on Monday:

The course record from 2011, when there was a significant tailwind

The women’s course record, set in 2014 by Buzunesh Deba (although, Rita Jeptoo ran faster, she was stripped of her title after being caught doping)

Only Deba has cracked the elusive 2:20 barrier at Boston

The temperature at its peak during the 2012 race

The hottest ever recorded temperature at the Boston Marathon, in 1976, where about 40 per cent of the field dropped out