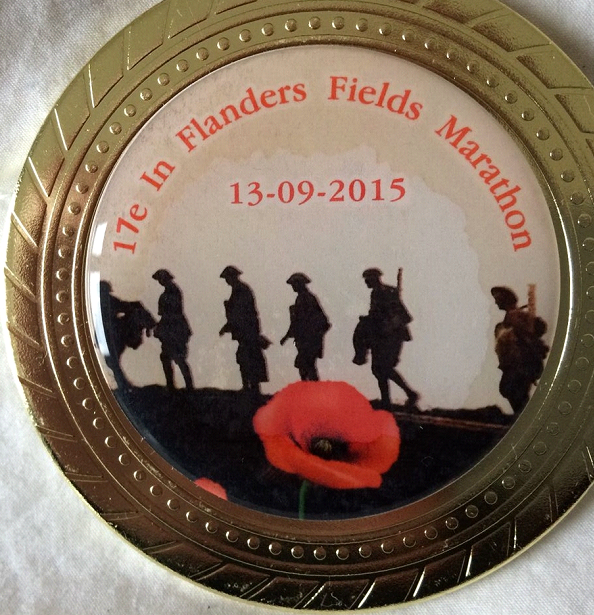 In Flanders fields the poppies blow
Between the crosses, row on row,
That mark our place; and in the sky
The larks, still bravely singing, fly
Scarce heard amid the guns below.
We are the Dead. Short days ago
We lived, felt dawn, saw sunset glow,
Loved and were loved, and now we lie
In Flanders fields.

The Battle of the Somme fought between July, 1916 and November 1, 1916 near the Somme River in France was one of the bloodiest military battles in history. On the first day alone the British Commonwealth of Nations suffered more than 57,000 casualties and by the end of the campaign the Allies and Axis powers would lose more than 1.5 million men. One of the casualties on July 1, 1916 was William Patrick Doheney, Royal Newfoundland Regiment, #496, age 24, known to me and my siblings as “Uncle Will.” The Newfoundland Regiment had campaigns in Gallipoli earlier in the war but not many casualties. July 1, 1916 would see 812 young men go over the top and only 36 answer role call the next morning.

After the war, the Newfoundland Government bought the battle field at Beaumont-Hamel in northern France and created a memorial to the soldiers who gave their lives there. Many who died are interred there or close by. It has been a site of pilgrimage for Newfoundlanders over the last century, because as a small Dominion at that time (later to become part of Canada) and a part of the British Commonwealth, almost every family on the island had a relative who paid the supreme sacrifice in the opening day battle. This is hallowed ground and now houses a museum and interpretive centre. There are tours of the battle field where one can still see the bomb craters and trenches, old barbed wire fences and danger points still visible.

“Race bibs had not only the present runner’s name but also that of an athlete who was killed in The Battle of the Somme.”

As a young Newfoundlander I’d always wanted to go visit the battle site and memorial park where Uncle Will was buried. Time slipped by and not being that young anymore I decided that it was time to go. My original plan was to go in 2016 on the 100th anniversary of the battle, but a few years back my sister Ann, who still lives in Newfoundland, discovered the In Flanders Fields Marathon and was instrumental in getting this trip off the ground.

The In Flanders Fields Marathon is a run for remembrance. It is to honour the fallen and all others who were deployed to this front line during the First World War. In 2015, the 17th running was organized by Andre Mingneau, a local founded the race. He’s an omnipresent figure –at the registration and the start, where he greeted every runner personally at the finish. Race bibs had not only the present runner’s name but also that of an athlete who was killed in The Battle of the Somme. More than 200 Olympic athletes were killed in this region during the war. James Duffy was a Canadian marathoner who represented Canada in the 1912 Olympics, won Boston in 1915 and was killed in action the day after the Boston Marathon in 1916. My sister’s bib had his name on it to commemorate his honour.

The point-to-point race starts in Nieuwpoort, a small fishing village on the coast of the Belgian Flemish province of West Flanders. It dates back to 1163 and in 1916 as part of the Battle of the Somme the sluice flood gates were opened to immerse the low-lying land along the River Yser to halt German advancements. We were bussed out from the finishing area in Ypres to the start in comfortable motor coaches. The start is at the fish market and has indoor accommodations for runners prior to the start. Everything from hot coffee, croissants, bananas and beer kept us very comfortable until the start.

Right after the start, the race goes over these gates and follows the river all the way to Ypres where it finishes in front of the Flanders Field Museum. We rented an apartment in Ypres for the week and were only two blocks from the finish line.

The race had about 800 participants and in talking to many runners (yes, they are all multilingual) this is a favorite of many Belgians and is their go-to race each year. One runner that I talked with was running it each year from 2014 to 2018 as a commemorative for the years of the First World War; he had never run a marathon before that first race.

The marathon winds its way, all off-road, on a flat and fast course of wide bicycle trail along the River Yser to Ypres. We passed through many a farmers field with disgruntled cows or goats voicing their concerns. The run passed by meticulously maintained commemorative graveyards. At the 5K mark, we were greeted by a bagpiper in his kilt standing in front of that field of poppies. Many locals from the small farming communities along the route were out in support of the runners. All runners had an opportunity to have bicycle support or companionship from 15K on. The field had opened up enough for cyclists to accompany their runners and for a small registration fee the cyclists got their own participant souvenir shirt as well.

We passed the “Trench of Death” in Dixmude, where the scene has been preserved of the front line that Belgium held for the four years of the war. Today, it’s a serene stretch of the run. Continuing along the canal, the race passes through the town of Steenstraete, with its memorial to the 6,000 Belgium soldiers who, in 1915, were the victims of the first poison gas attack in modern warfare. Continuing along the course and getting closer to the finish in Ypres there are many international military cemeteries.

“Standing next to my younger sister, Ann, we lined up with Belgian, Australians, New Zealanders, English, Irish and Scottish runners who were all there to run it in remembrance for a fallen family member.”

In order to enter Ypres at the end of the canal, runners must pass through the Menin Gates at the eastern entrance to the city, which faces the front lines of the war. Inscribed on its wall are over 54,000 names of soldiers, who marched through the gates and never returned, their remains never recovered. Local farmers are still turning up bones of the missing as well as left behind munitions.

The race finishes in front of the medieval cloth factory that now houses the Flanders Fields Museum. It’s very tastefully done and presents a great commemoration to all soldiers of the Battle of the Somme. The city was levelled by the end of the war and Winston Churchill recommended not rebuilding it as a remembrance of the ugliness the war. The indomitable spirit of the Belgian people was not to be challenged. They eventually rebuilt this wonderful city and it serves as a new sort of memorial to all who helped them preserve their freedom. Every evening at 8 p.m. at the Menin Gate the local volunteer fire brigade conducts a Last Post Ceremony to honour the dead. Traffic is stopped, a combatant is commemorated and the last post sounded. This has been a nightly occurrence since 1928, with only a few years of absence during the German occupation during the Second World War.

Standing next to my younger sister, Ann, we lined up with Belgian, Australians, New Zealanders, English, Irish and Scottish runners who were all there to run it in remembrance for a fallen family member. The race was well organized and one could not have a better conditions for the run, with a temperature 10-12 C at the start. The field was very fast with pacers offering everything from sub-three-hours to 4:30.

We toured the battlefields and grave yards after the race. We saw Uncle Will’s final resting place and feel we have connected with our family’s military hero. We wore his regimental insignia on the front of our running shirts and his name, regiment number, date of birth and death on the back. We were honored to do so and the recognition by the race committee of our intent made their day as well. It is truly a race of commemoration and one that I will remember fondly and hope to do again.

Take up our quarrel with the foe:
To you from failing hands we throw
The torch; be yours to hold it high.
If ye break faith with us who die
We shall not sleep, though poppies grow
In Flanders fields.