Canadian track and field fans and athletes have something to get excited about this outdoor season: the Canadian Track and Field League. This brand-new league will see four teams of 32 athletes compete through a four-meet season, accumulating points to determine a winner. We spoke with the league’s creator, Quinn Lyness, who gave us the rundown on this exciting new development in Canadian athletics. 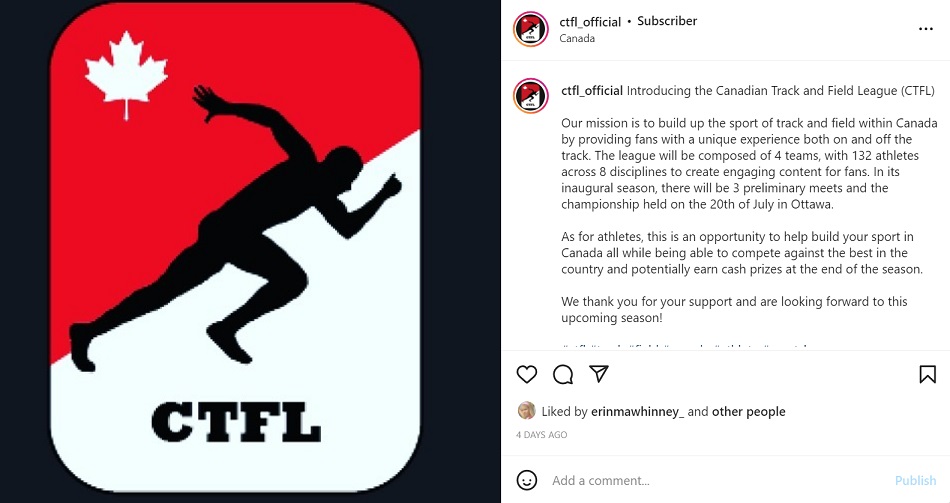 The league will be composed of four teams, each with four athletes per event (two males, two females). There will be eight events in total, including the 100m, 200m, 400m, 400m hurdles, 800m, 1500m, shot put and long jump, for a total of 32 athletes per team (128 athletes in total). As the league continues, more events will be added in subsequent years, allowing it to grow and become available to even more athletes.

There will be four meets throughout the season: three preliminary meets and one championship, which will be held in Ottawa this July. Athletes will be able to accumulate points throughout the season based on the World Athletics point system, and individual and team winners will be rewarded based on the total points accumulated. While individuals are only required to attend a minimum of one preliminary CTFL meet and the final, each CTFL meet will carry 20 bonus points to incentivize athletes to participate in all of the CTFL meets.

“One of the reasons we’re doing this whole team structure is because team sports are very popular in North America,” says Lyness. “Bringing that to track and field might create a new market segment for the sport.” 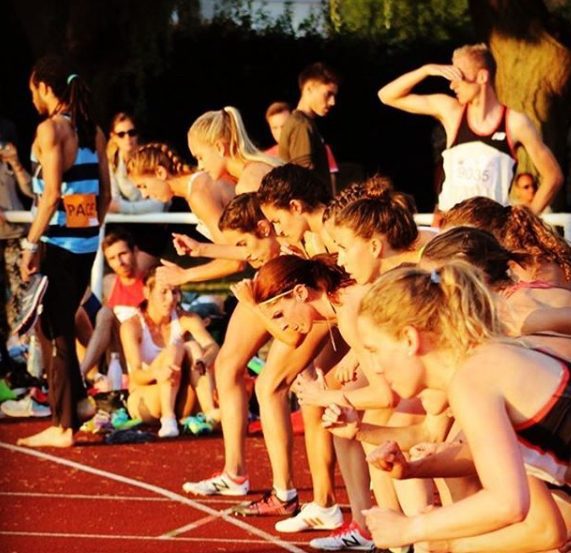 Who gets to compete?

To be eligible to compete, athletes must have run a qualifying standard during the last two outdoor seasons in their respective events. These standards are based on the top 50 performances per event last season in Canada, and are as follows:

Athletes who run these standards will either be contacted individually or through their club, and their names will be entered into a pool of eligible prospects. This, however, doesn’t guarantee they’ll be put on a team this year. From the prospect pool, the four teams will select, or draft, athletes to their rosters.

Who will make the draft picks?

This is where the fans get to have a voice. There will be ambassadors for each team (Olympic sprinter Aaron Brown has already agreed to represent one of the teams), and Lyness says he will be starting a Kickstarter campaign, which will give fans the opportunity to be “partial general managers” of one of the teams and create their own draft board for their team. This information will be sent to the league and compiled into an Excel file that generates the “average draft” for your team, based on the input from all the other partial general managers. There will be 10 positions like this per team.

“It’ll be cool because a lot of people fantasize about managing their own team, and often wonder why managers make this decision or that decision,” says Lyness. “Now they’ll have the opportunity to make those decisions themselves.”

Will athletes have to change coaches or clubs?

In short, no. “We’re not a club. When you look at the rankings on Athletics Canada, you’re still going to see the athletes listed with their original clubs,” says Lyness. “You don’t need to switch clubs, you don’t need to switch coaches. I think one of the biggest selling points for athletes is that this league was designed so that you don’t have to change your training habits. You can just come and compete.”

When does the league start?

The athlete pool entries will start next week, and that announcement will be made via the CTFL Instagram page. From there, a date will be set for the draft and the teams will be officially announced thereafter. The championship meet will be held in Ottawa on July 20, which means all three preliminary meets will be held beforehand, however, Lyness says those dates are yet to be confirmed. As of now, all league meets will be held either in Ontario or Quebec, but Lyness says there has been a huge amount of interest and support from other provinces, so he is hoping to expand the league across the country for 2023.

In its inaugural year, the event list has been kept short, and Lyness says they tried to make sure the events spanned all areas of track and field. If the league is a success, they hope to continue adding more events in the future.

An opportunity for athletes

Lyness says historically, there hasn’t been much funding or support for up-and-coming (or even national-level) Canadian athletes, which was one of the main motivations behind creating this league. His two main goals for the league are to bring more content to fans and help build the sport of track and field in Canada (all CTFL meets will be viewable on YouTube), and to help athletes financially by providing them with a platform to build their own brand.

“I think there’s a huge gap in the market in track and field,” he says. “We’ve seen running as a sport take off over the last decade, and I’m trying to make the barrier for fans lower.”

Social media is changing track and field for the better

Lyness also points to the large gap in Canada between our Olympic athletes and our up-and-coming athletes, and argues that by giving more support to athletes at the lower levels, it will help Canada become more dominant on the world stage.