John Frederick, 66, became the first Canadian to run 34 consecutive Boston Marathons on Monday. The Toronto native completed his 34th running of the event in 5:09:32. Frederick says he started running marathons because he didn’t have as much time to play squash, which had previously been his main sport. “I only started running to stay in shape for squash. And then I started running more after I got married and had kids, and it was easier to go out for a run than get to the gym.” 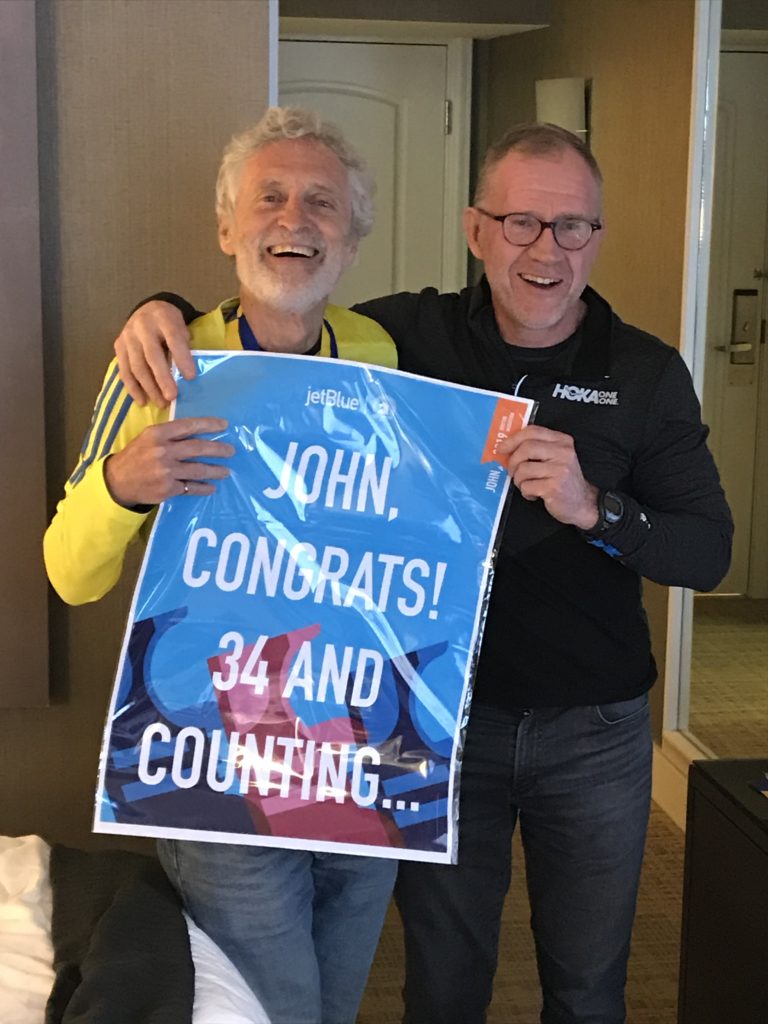 Frederick has now done around 80 marathons total. “I’ve done lots of different marathons around North America. I’ve run in Philadelphia, New York, Vancouver, and obviously, Boston. Boston is certainly my favourite.” As a true Boston Marathon expert, we asked Frederick for some marathon weekend advice. “You need a good spectator [his is usually his wife], you can’t get excited at the beginning of the race and you need to bring clothes for any weather. You can experience every season between the start and the finish of the marathon, so bring clothes for all conditions.”

The runner is a member of the Quarter Century Club, an exclusive group of people who have run over 25 Boston Marathons. He says that they’re treated like kings at the marathon. “We get our own bus which we’re allowed to sit on until the race starts, there’s also a washroom on the bus which is amazing. If you’ve run over 25 consecutive Boston Marathons you automatically qualify, but if you miss a year you’re back to zero.” There were 85 QCC members registered at the 2019 Boston Marathon.

Frederick’s favourite Boston was also his fastest. “The race was right around my 40th birthday. In those days there was no timing chip so you had to wait until the next morning to see your time printed in the Boston Globe. My sister called me the next day asking if I was OK because she was looking at results and couldn’t find my name anywhere. But she was looking at times over 2:40 and I had run 2:39.”

The runner was 32-years-old when he ran his first Boston, and has been lucky to stay relatively injury-free since. “I’ve been very lucky, but I did have one mishap this summer that I thought was going to end my Boston career. Up until this summer I had run everyday for 30 years and then I fell down the stairs and broke seven ribs. It took five or six weeks to heal and even then my soft tissue didn’t feel entirely right. I hadn’t done many long runs leading into the race.”

Going forward, Frederick is going to train over the summer in hopes of running the Scotiabank Toronto Waterfront Marathon in October and his 35th Boston next April. He’s coached by Mike Dyon.