Jacob Kiplimo had a decent lead and was certain that he’d won and set a new course record. But in the last four metres, Kandie appeared from nowhere to swerve around Kiplimo and break the tape. Kandie finished in 42:39 and Kiplimo in 43:00. Kandie became the first to run under 43 minutes in the race, taking the record from Paul Tergat, a former marathon world record holder.

Kiplimo was the silver medallist at the 2019 cross-country World Championships and was fourth in the 10,000m at the 2018 Commonwealth Games. Kandie, on the other hand, has slower personal bests and no major titles to his name, but he ran the savvier race on Tuesday.

The Sao Paulo 15K shares a name with two other events that take place in Portugal and Spain. 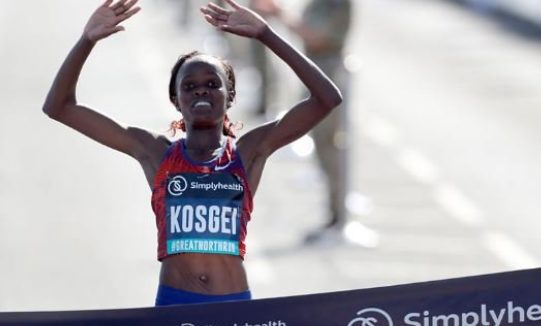 In the women’s race, Brigid Kosgei won handily, crossing the finish line in 48:54. Kosgei ran a women’s marathon world record of 2:14:04 in October at the Chicago Marathon. Other than her pacers, the runner was completely alone for almost the entire marathon. She shattered Paula Radcliffe’s 16-year-old world record of 2:15:25, which many considered to be nearly unbeatable and one of the toughest records in the books.

RELATED: Why Kosgei deserves the same kudos as Kipchoge (or more)