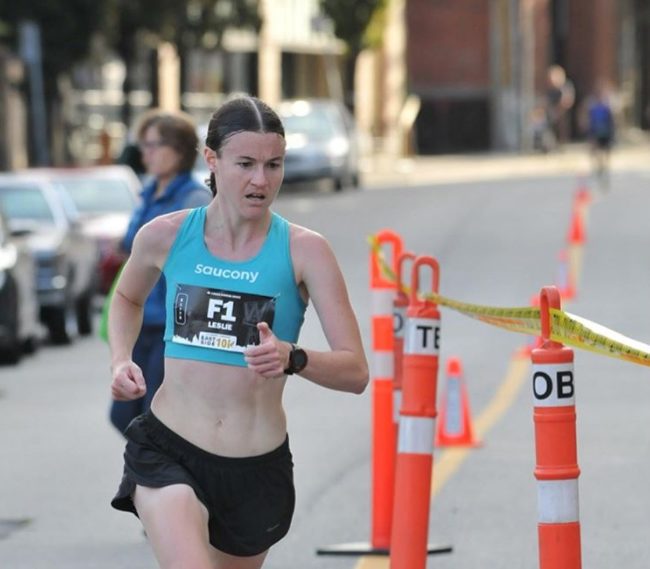 A twisted ankle meant a late start to the racing season for Leslie Sexton, but after claiming the 2017 Canada Running Series overall title she isn’t complaining.

The 30-year old from London, Ontario finished with 164 points, earned from her two second place finishes in the Toronto Waterfront 10K and Under Armour Eastside 10K (in Vancouver) and then her dominating performance at the Scotiabank Toronto Waterfront Marathon where she was the first Canadian and fifth overall.

RELATED: Getting to know Leslie Sexton

On top of the individual race prize money, she collects $3,000 for this overall title. The distance runner was somewhat surprised with how things turned out.

“I sometimes forget about it as you are always focused on one race or what is coming up next,” says Sexton.”But it’s something my coach and I try to target at the start of the season.

“We try to pick three races in the Canada Running Series and then do the (necessary) one out of province, the Vancouver Eastside 10K. So it was always something we planned to do. It’s kind of in the back of your mind when you are performing at a single event.”

Winning the Athletics Canada Marathon Championship in a time of 2:35:47 was a fine end to the season but she’s always thinking ahead and planning her finances wisely.

“It’s the first year in a couple of years that I haven’t got ‘Quest for Gold’ funding, the Ontario provisional funding,” she explains. “So I had to make the dollars stretch further and watch the expenses. I tried not to travel too much for competition and really just focused on stuff where I was staying in province, for the most part.”

She adds that this title will bring up other opportunities for her and that she’s probably looking to run the Houston Half-Marathon next.

Runner-up this year was Olympian Natasha Wodak of Vancouver, who earns $1,500 from her 149 points. Masters competitor Lioudmila Kortchaguina of Thornhill, Ont. was an impressive third with 108 points. That rewards her with a bonus $1,000. 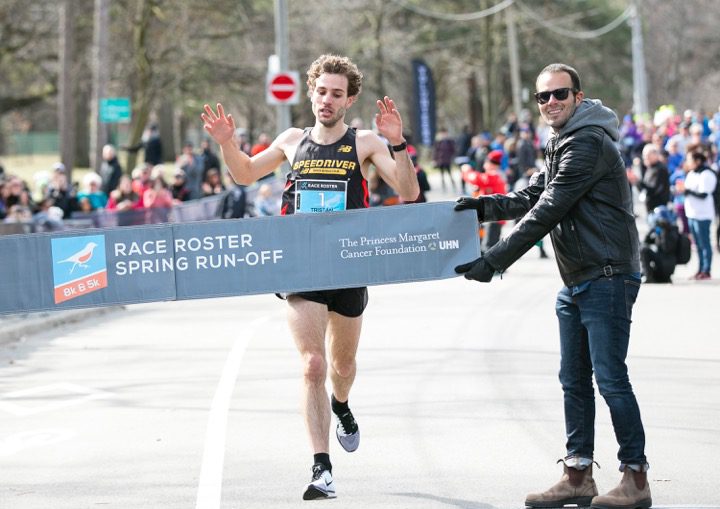 The men’s overall title went to Tristan Woodfine from Speed River Track Club in Guelph. The athlete won the Race Roster Spring Run Off 8K in Toronto in April, then finished 4th in both the Toronto Waterfront 10K and the Scotiabank Vancouver Half-Marathon on back-to-back weekends in June. That earned him 116 points, twelve more than Toronto’s Sami Jibril who actually beat him at the Waterfront 10K.

Baghdad Rachem of Montreal finished 3rd with 70 points overall, and also won the Masters division with 120 points by virtue of being first Canadian Master at both the Toronto Waterfront 10K and the Scotiabank Toronto Waterfront Marathon.

Woodfine was complimentary when speaking of his experience at the various Canada Running Series races.

“All (Race Director) Alan Brookes’ races are very well organized. and they provide a lot of support to the Canadian elite road runners. So doing his races is sort of a natural thing. That is why I ended up doing so many. It’s great to win the overall series,” he said.

These days, the runner is focusing on paramedic studies at the Ontario College of Health and Technology in Hamilton and so the money will come in handy for tuition. He plans to return to the Ottawa Valley once he has graduated.

The masters women’s title was a tight contest between Vancouver’s Catherine Watkins and Lioudmila Kortchaguina, with Watkins triumphing in a battle of two outstanding 46-year-olds. The member of the BC Endurance Project finished with 150 points, just eight points more than her Ontario rival. Watkins’ performance at the Scotiabank Toronto Waterfront Marathon proved the difference: she collected 60 points by winning the Canadian masters marathon title there.

“I’m extremely happy to have been healthy and strong this year and to have been able to compete in, and win the masters competition in the series,” said Watkins. “The masters running scene is extremely strong now in Canada and it’s fantastic that the CRS continues to support those of us who continue to compete as we get older.”