In October 2015, Joel Kennedy began his health journey. At 390 pounds, he knew he needed to make a change, so the London, Ont. native, who is a member of the Oneida Nation of the Thames and is Bear Clan, and began running. He started with a couch-to-5K program, and in just three years he lost 115 pounds and ran his first marathon. During that time, he founded the Indigenous Runners Club, and now, with the help of Brooks Canada, he is helping to organize a solidarity run for Indigenous Peoples living in Ontario. 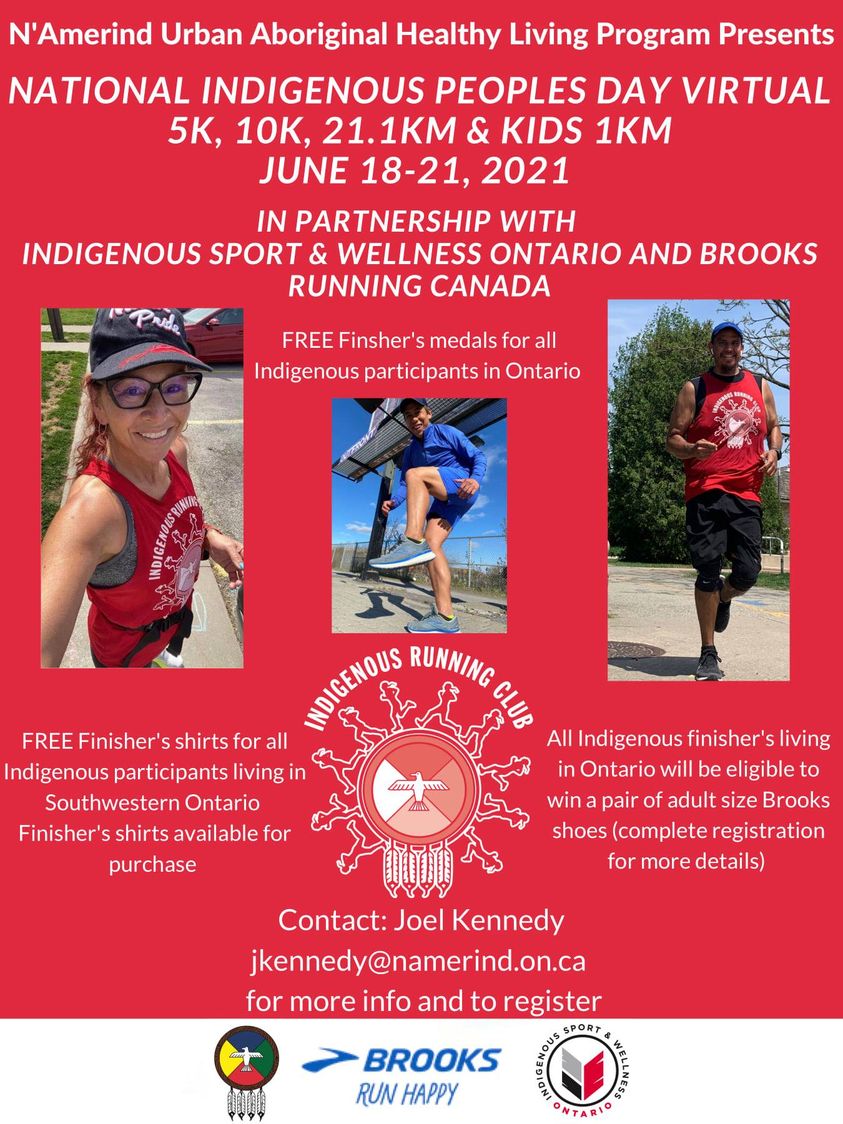 As the Urban Aboriginal Healthy Living Coordinator at N’Amerind (London) Friendship Centre, Kennedy is well aware of the health issues that are prevalent in many Indigenous communities, including obesity and diabetes. It was his own fear of developing diabetes that finally motivated him to make some positive changes, and starting the Indigenous Runners Club has allowed him to help others become healthier, too. As much as we like to think running is an accessible and inclusive sport, many Indigenous people have not always felt comfortable or represented in the running community, and Kennedy’s club has helped to change that.

“The whole reason I created the Indigenous running club was to support people in my position so they would have something to connect to,” he explains. “That way when we went to a race, people would recognize us. They would see that we’re a club, they would acknowledge us as not just single individuals.”

National Indigenous Peoples Day is on Monday, June 21, and in Kennedy’s community, this day is known as Solidarity Day. He describes it as a day of celebration for Indigenous people, and in normal years his community hosts a large event in which Indigenous people in London can gather to share culture, language and food. Because the event was forced to go virtual again this year, Kennedy was inspired to organize a virtual solidarity run for the members of the Indigenous community.

“Since all the restrictions happened, I’ve been trying to find ways to keep people active and keep people motivated through the running club,” he explains.

Brooks Canada has already helped him organize some of these challenges, and now they are helping him put together the solidarity run, which is an opportunity for people to walk or run and celebrate the day together virtually. Anyone who identifies as Indigenous living within Ontario is welcome to sign up for the event, and participants will receive a finishers medal and a T-shirt commemorating the event. The event is free, in order to make it as accessible as possible to Indigenous peoples, which is why, for funding reasons, the event is restricted to Indigenous peoples in Ontario.

For non-Indigenous runners, Kennedy says the best way they can support the Indigenous community within Canada is to educate themselves on the history of Indigenous peoples in this country. After the recent and devastating news of the Kamloops residential school, the need for this type of education is more apparent than ever.

Anyone who wishes to sign up for the run can do so by sending an email to jkennedy@namerind.on.ca, or can visit the Indigenous Running Club Facebook page for more details.