The Beneva Marathon de Montréal is one of Canada’s best fall race weekends. After a two-year hiatus, with a new and improved course, the race returns this year on Sept. 23, 24 and 25. Running past some of the most beautiful attractions in Montreal, through three boroughs and nine districts, this Athletics Canada-certified course is equal parts beautiful and competitive. The course is really a running tour of the city, and a Boston qualifier to boot.

Race organizer Stephane Corbeil has a special history with the race. His father was the event organizer in 1979. “Mario Blain worked with my father back in 1979, so I brought him back to design the course for the 2022 marathon. To organize a marathon, you need a solid team. I have people on my team who know the city by heart. I gave Mario a carte-blanche to take the best parts of old courses and lessons learned from runners. He took it from there to create a new course,” says Corbeil.

Both the marathon and half-marathon will start from Espace 67 on Montreal’s Ste-Hélène Island, better known to many as the site of Osheaga Music and Arts Festival. The marathon course takes runners through Notre Dame Island and Saint Helen’s Island on Circuit Gilles Villeneuve, Old Montreal, the historic districts of Ville-Marie, Rosemont-La Petite-Patrie and Hochelaga-Maisonneuve, before finishing on Montreal’s Olympic Park Esplanade.

While the race will no longer traverse the Jacques Cartier bridge, runners will instead get from the island to the mainland via the Concorde bridge. Another benefit to the start location is the Metro Jean-Drapeau stop only 250m from the start line, making it easy for participants and family to get around.

The 1K, 5K and 10K now start and finish from the same location, the Olympic Park Esplanade, making for a more efficient event. 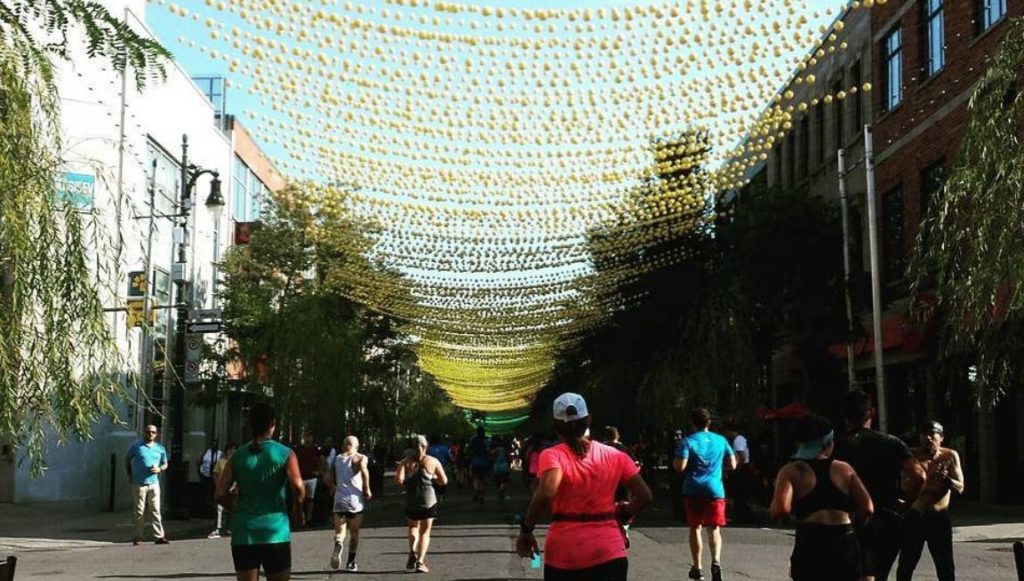 Montreal is very hilly; as Corbeil puts it, “Montreal is Montreal. It’s a hard one! You don’t come to Montreal to run a personal best, it’s to achieve a goal that will make you proud, and to see beautiful scenery. It’s not flat–it’s not boring. We decided to create a course that will keep runners entertained.”

Much like Boston, when you’re racing a hilly course, it’s important to train for the hills–and that means both uphills and downhills. If you live in a hilly area, map out some runs with undulating terrain to practice feeling smooth both up and down. Hill repeats are also a great option for working on form and speed. If you don’t live in a hilly area, you can always mimic going uphill using a treadmill.

On race day, keep in mind that most of the climbing happens between 10 km and 15 km, and again between 25 km and 35 km–thankfully, the race ends on a gentle downhill.

Either way, you’ll want to prepare yourself ahead of time for Montreal’s beautiful but challenging elevation profile.

Also on Saturday is a 2K kids run, the Sports Experts 5K and the 10K.

Sunday morning is race day for the marathon and half-marathon, which start simultaneously at 7:45 a.m.