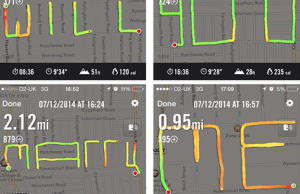 We all know runners who is more than attached to their GPS and carefully maps out routes the night before a run. Ben Chudley of Portsmouth, England, has taken this to a whole new level, spelling out the words “WILL YOU MARRY ME” with his Nike+ running app.

Chudley estimates that he ran approximately 24K while creating his marriage proposal. He turned the tracker off for portions of the run, so that the letters wouldn’t all merge together. When he was finished creating the proposal, he told his girlfriend, Olivia Abdul, that he was just heading out for a run.

In reality, he uploaded his route to Facebook, tagged his girlfriend, changed into a suit and returned to home with flowers and a ring. Then he popped the question that he had spent all that time running thinking about. She said yes.

Chudley’s proposal is especially appropriate, as he is the creator of the Facebook group “Urban Pictionary,” meant for people who enjoy drawing things with their running routes. Chudley has previously drawn a dinosaur and Spongebob Squarepants, using his GPS.