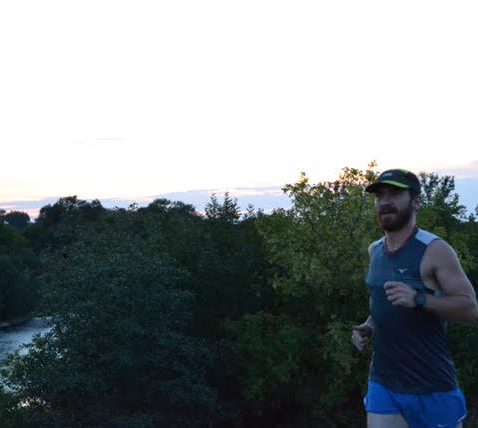 Running along the Grand River in Brantford, Ont., Jordon Yeomans spots a blue crane fishing in the water. It’s 5:00 a.m. and he’s running his typical 10K to start the day. This is his favourite trail which he discovered only recently– about two months ago.

The trail underfoot is smooth with even footing. On one side of him are lush trees. The crane is one of many wildlife he spots too. He saw another one fishing for breakfast not long ago and oftentimes, he spots rabbits bounding on the trail ahead of him. Most people aren’t awake yet but skunks, rabbits and deer are.

RELATED: Stories from the run commute: “I lost 100 pounds by running trails to work.”

RELATED: Stories from the run commute: “My run commute led to a career change.”

These 5:00 a.m. mornings are a new addition to Yeomans’ life. Actually, so is running. He only started running in May. At over 200 pounds, he had had enough of worrying about his weight. He took a big step with his health when he joined a local gym and started working out. There he met a trainer who challenged him to run for cardio. “I remember telling her that I wasn’t much of a runner but I was willing to try anything,” he says. He started with three kilometres doing an out-and-back route and then started running with his trainer. “I would meet her at the gym when she had some down time and she would run with me,” he says.  The weight started to fall off. Now, after five months of running, he runs six times a week, holds a 47:42 10K PB and stands at 161 Ibs.

“Other than feeling amazing, and having achieved my goal of loosing weight, one one the main reasons why I love running, is because you can easily track your progress,” says Yeoman. “I love going over my weeks and seeing how I’ve been able to push my pace faster and faster and how I can add on extra mileage week by week. I’m hooked.” 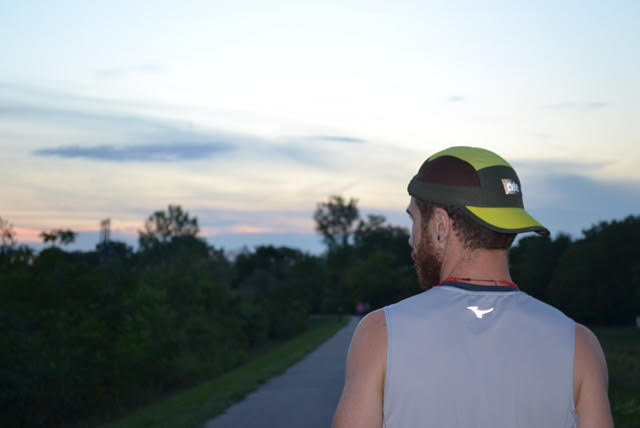 Part of keeping this going is having a stable morning routine. To make everything happen smoothly, he gets up at 5:00 a.m. He sets two alarms and places both of them across the room so he’s forced to get up. That’s one of his tricks. He gets his running gear ready the night before– one less thing to do. Once awake and out of bed, he gets a glass of water, gets dressed, and heads out. When Yeomans started running, the early hours of the day was the only time that he could fit it in. Married with a young child, he has a lot of responsibilities and needed to slot it in at a time that wouldn’t conflict with work, getting his son ready for daycare, dinner and his child’s bath time later. So 5:00 a.m. it was. Now, it’s a habit. “At 5:00 a.m.. the world is still sleeping and I can just focus on my run,” he says.

The trail that runs by the Grand River is a good way to convince any runner to get up and out. Mornings there are still and serene. “To put it simply, at 5:00 a.m., it’s only me,” says Yeomans. “And it’s all about me. I love how crisp the air is. I love that nobody is around.” The trail runs by the river for 15 kilometres in one big loop. Since he discovered it not long ago, there’s still a lot of ground to explore. Most of his runs are are in the 10 to 12-kilometre range so he has yet to complete the full loop. It’s by far his first choice when deciding where to spend his morning run.

Though weight loss was his reason for starting all of this, there are so many others reasons now that keeps Yeomans at it. That’s a classic story among the community of runners who took to this lifestyle to subtract numbers on the weight scale. The pounds disappear but the routine of running sticks around. “Despite when people comment saying ‘Aren’t you exhausted for the rest of your day?’ I find that running in the morning sets my day up to be focused and productive,” says Yeomans. He says he has more energy now during his day than he did when he was doing no physical exercise. And hey, spending time watching a blue crane catch an early breakfast isn’t a half bad way to start the day either.