Kyla Gillis is a high school science teacher from Kentville, NS who entered her first ultramarathon on a whim, and won it. Her intention was to support her boyfriend, who was looking to complete the Race Across Nova Scotia. The virtual event challenged runners to traverse the length of the province, covering just shy of 800K on foot. Gillis ended up the overall winner, finishing in 13 days, 19 hours and 35 minutes. 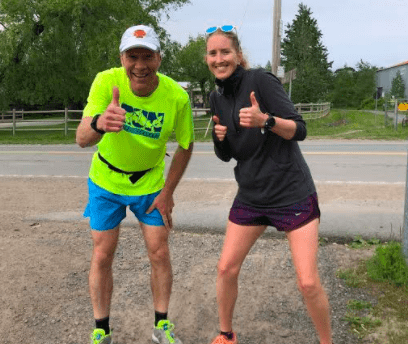 The race began on June 1, and Gillis’s boyfriend, Dylan Burgess, talked her into running with him. “My boyfriend is into trail running and he suggested we sign up. I just wanted to support him and then he got injured three days in, so my goal changed and I decided to do it as fast as I could.” Gillis was still teaching full-time, so she had to schedule her runs around staff meetings and classes. She did this by suffering through 12K on the treadmill everyday, “but most of it was done on the trails in the early morning or evening, because my feet blistered like crazy on the treadmill. And I’d rather be outside.” 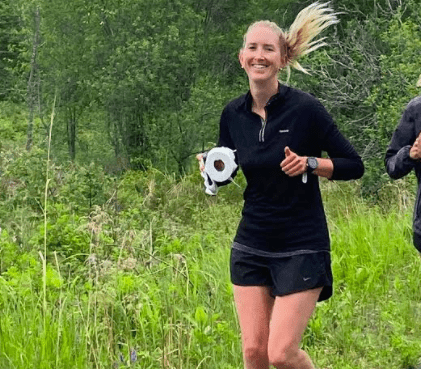 2 p.m. – Another 20K, but the timing on this changed if I had staff meetings. Sometimes I was teaching Grade 11 chemistry while running on the treadmill

Gillis says the community was amazing throughout: “Once Dylan [her boyfriend] had to drop out, the community started stepping in to run with me. I was getting pretty bored so this was really helpful.” She also explains that most of her running was done on the trails to keep her legs from getting too beat up, but she jokes that she didn’t (and still doesn’t) own any trail shoes. “I started running four years ago, I’ve done a couple halfs and fulls, but I still feel like I’m learning how to run.” She tried to average at least 50K per day, sometimes running as much as 80K. 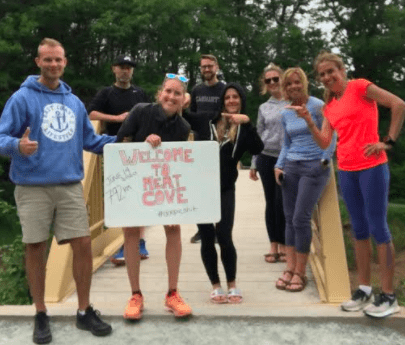 Gillis says that the first 12 days were perfect, nutritionally. “I ate an insane amount of calories, so that I barely gained or lost one pound at the end of every single day. But then in the last two days, my GI system gave out entirely. Day 13 was the worst day of my life. I was using the washroom in the woods. I wanted to finish in under 14 days, so on my last day I didn’t have anything to eat or drink over the 80K I ran. My stomach was so mad at me.” She say it took about a week for her stomach to return to normal.

Up next for Gillis is a fall marathon. If the event doesn’t go as planned (she’s predicting it won’t) her friends are planning to run the 42.2K locally. “This is keeping me motivated. Either way, I’ll run a marathon this fall.”