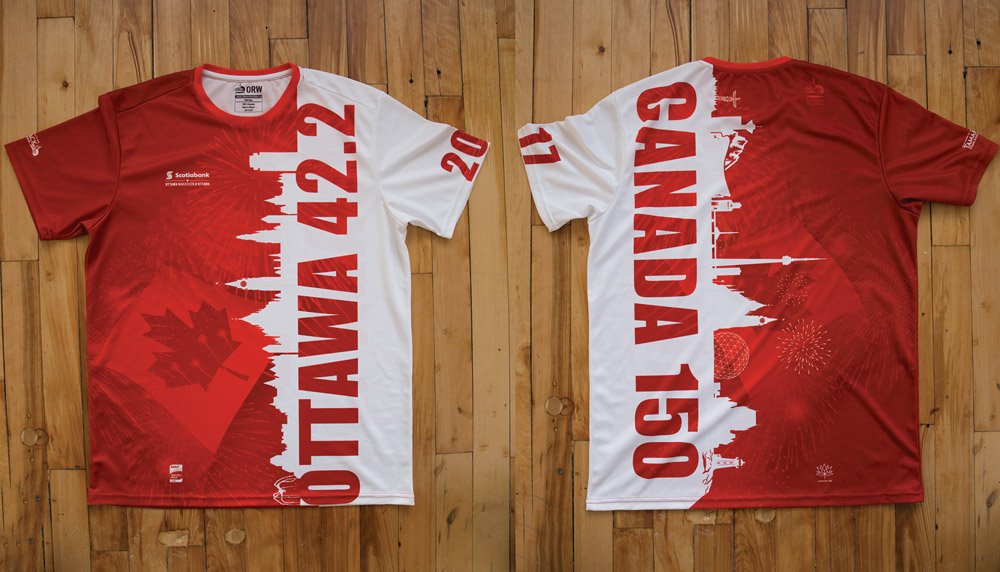 The 2017 Ottawa Marathon will be held in the midst of Canada’s 150th anniversary at the end of May. It’s only appropriate that the marathon swag will be honouring Canada’s history coast-to-coast.

On Friday, the Ottawa Marathon unveiled its 2017 red and white-themed race shirt featuring popular landmarks including Quebec City’s Chateau Frontenac, Toronto’s CN Tower and Calgary’s Saddledome on the back. The front is decorated with Ottawa’s skyline and reads “Ottawa 42.2.”

There is also a small icon on the front that reminds runners that the event is an IAAF Gold Label event, the most prestigious category for road races. Tamarack Ottawa Race Weekend registration is open for the May 27-28 event in the nation’s capital.

The race shirts for the other Ottawa race weekend events, including the 5K, 10K and half-marathon, have not yet been announced. Ottawa will not be the only race in 2017 to commemorate Canada’s 150th anniversary. The Calgary Marathon, which falls on the same weekend as Ottawa, will be hosting a 150K race.

Close to 47,000 runners took part in the weekend’s six events in 2016. The Ottawa 10K also doubles as the Canadian 10K road championships as the country’s top runners often make an appearance. Lanni Marchant and Reid Coolsaet won the national 10K championships in 2016.