At a race, it’s essential for runners to have on course water, aid stations and quality post-race food. Yet the most overlooked and obvious aspect of a healthy event is high quality air.

Ideally, we would all just breathe a standard mixture of nitrogen and oxygen with a bit of water vapour. But there are many other things floating in the air, some are benign, some harmful. Researchers, including myself, are still struggling to determine what, exactly, makes up “bad” quality air.

So far the best metric we’ve devised is related to the total mass of small aerosol particles, a.k.a. particulate matter (PM). And by small I mean suspended bits of matter less than 2.5 microns in diameter, which we call PM2.5 for short. PM2.5 is so small it can’t be filtered out by our nose hairs or mucous membranes.

Like the Rebel Alliance infiltrating the Death Star, it can easily penetrate our defences and cause serious damage. The long-term effects of breathing air containing high levels of PM2.5 are sobering: chronic cardiovascular disease, respiratory disease and lung cancer.

In a single year (2010), over 3 million deaths worldwide have been linked with breathing these bad aerosols. Like smoking, the worst effects of bad air come from cumulative exposure. Higher risk groups should take take heed to air quality advisories. To help make sense of it all, aerosols, along with other certain other pollutants, are combined into a single scale used to determine overall air cleanliness.

For simplicity I have added PM2.5 along with one other important pollutant: nitrogen dioxide (NO2). Together they come mainly from cars, coal power plants and openflame home cooking (think barbecues). The harder you run, the more you breathe, and running a marathon certainly requires a lot of breathing.

A 2010 American study found that aerosol content is related to slower marathon performances. But regular exercise is still important: studies have also shown that even in heavily polluted regions of the world it is better to perform regular aerobic exercise than to avoid it.

Compiled here is the air quality estimated for the 158 largest marathons in the world, plus the 10 largest in Canada. I define the air quality using expected NO2 and PM2.5 levels. Cities are given an air pollution index (api) score between 0 (perfectly clean air) to 10 (very unhealthy). 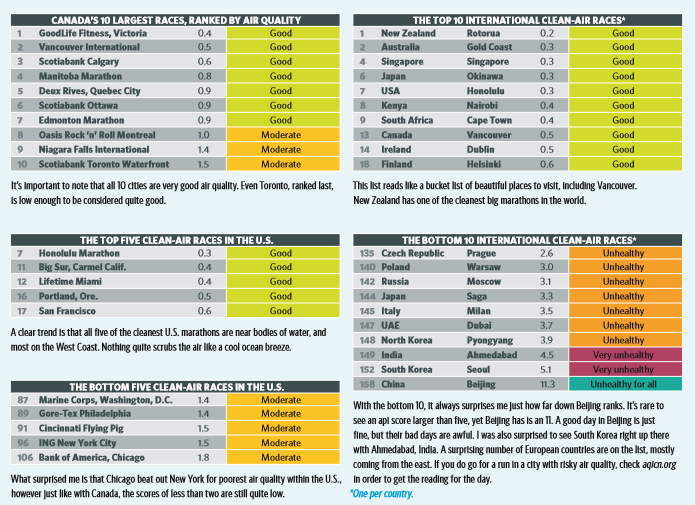 RELATED: Facts all runners need to know about air quality.

Footage from the Nov. 29 Delhi Half-Marathon in the world’s most polluted city.

The @runadhm lead pack at the 20km mark.. They are so graceful in their stride, I could watch them for hours.. pic.twitter.com/FRpEePAX0O

The information comes from satellite data collected globally as interpreted by our research group at Dalhousie University in Halifax. This list is imperfect, and the implications can be debated, but it’s a sampling of what’s out there. So enjoy the (possibly) first ever clean-air marathon ranking.

Graydon Snider is a post-doc fellow at Dalhousie University in atmospheric physics. When he’s not studying the air, he’s breathing it in deeply on a run.