Every runner’s–and race director’s–worst nightmare came true at the Portland Marathon in Oregon yesterday, as 14 of the top 15 runners went off course at mile nine and ended up on a freeway. Twenty-two-year-old Kallin Khan of the Bowerman Track Club was way out in front, and fortunately for him, his Portland Police motorcycle escort knew the course, directing him into the right-hand turn a little after mile nine. But the chase pack was far enough back that they didn’t see Khan turn, and between 14 and 20 runners kept going straight instead of making the turn, adding between 10 and 20 minutes to their race times and putting themselves in danger on a road that was not closed to traffic.

"We totally got screwed."

Problems with the new #PortlandMarathon yesterday led a group of top runners off course and onto a busy road. https://t.co/c2nmhJcUzT

A report on the OPB (Oregon Public Broadcasting) site describes the situation that arose when a misinformed bystander directed runners to go straight, since there was no sign indicating they should turn right near the entrance to the Ross Island Bridge. They ended up on Southwest Barbur Boulevard, a main thoroughfare that was not closed to traffic. Ultimately the runners found their way back to the course a couple of miles further south.

Jared Rohatinsky, CEO of Utah-based Brooksee, the company that recently took over the Portland Marathon and ran it for the first time this year, told us by phone that to have something like that happen was a “terrible mistake that we very much regret.” When the error was discovered, race organizers moved quickly to correct it: “We had staff there within a minute to lay out a line of cones and remedy the issue before many more people went through. Roughly 15 of the 6,000 participants were affected.” 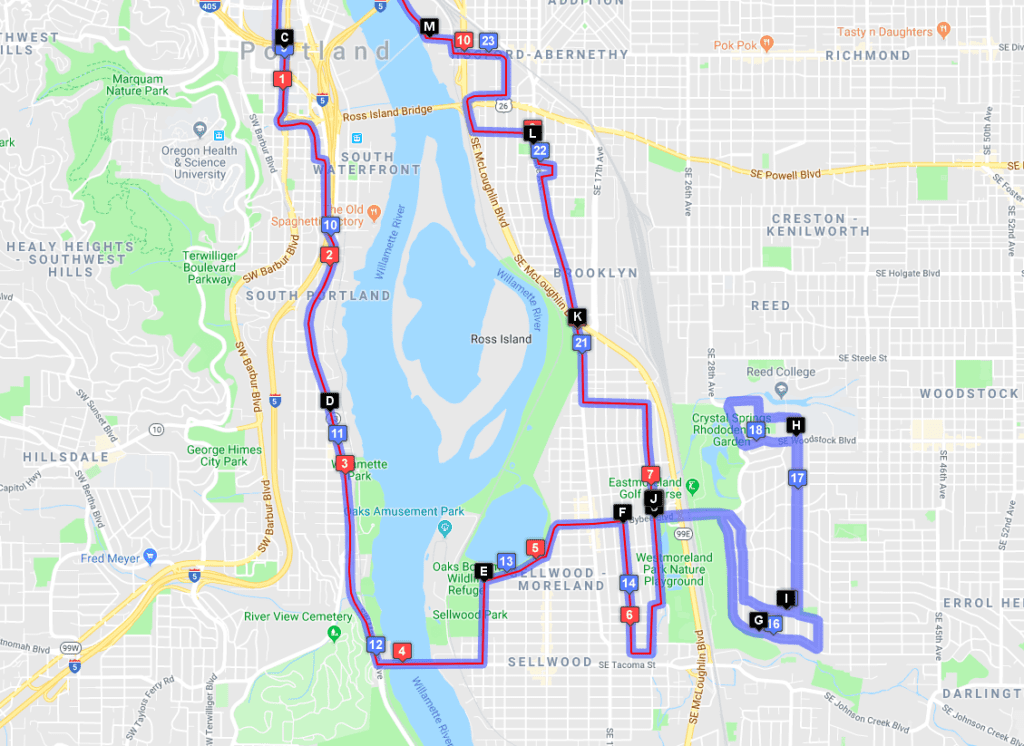 Moreover, Rohatinsky claims that 89 per cent of those who filled out a post-race survey said it was the best experience they had ever had at this race, which has been going for 48 years. “Yes, there was a very unfortunate incident that we fixed as quickly as we could, and that so many people still said it was the best experience they’ve had at this race is something we’re very proud of,” he said. The Portland Marathon has had a troubled history recently. According to a January report by KGW8, the longstanding former race director was under investigation for misappropriation of funds and had resigned following a settlement.

RELATED: Portland Marathon in danger of getting cancelled from 2017 schedule

Duncan Marsden of Calgary was racing Portland for the first time. He told us he was in second position at mile nine, “on pace for a sub-2:30 marathon… me and about 14 of the top 15 got sent the wrong way… In the end, the group of about 15 made our way back to the course (at which point I’d dropped from 2nd to 79th!) and although most of them dropped out, I ended up working my way back to 4th place. I ran 28.5 miles.”

Brooksee has offered a refund to the runners who were mistakenly directed off course and have also been offered free registration to Brooksee’s other marathons, which include the Chilliwack Marathon and Half-Marathon in British Columbia and a number of races in the US.