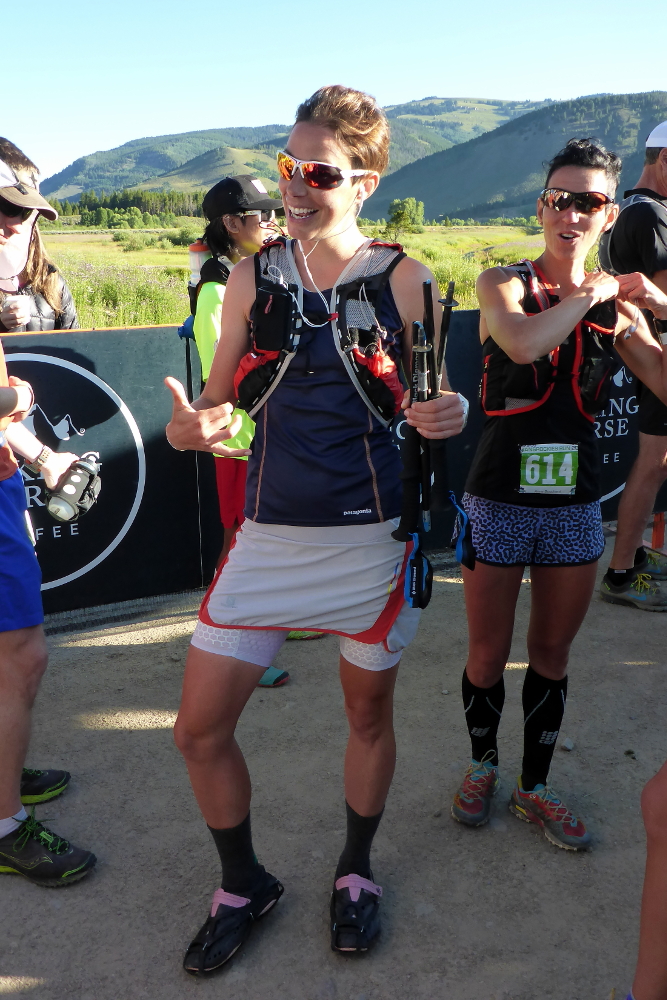 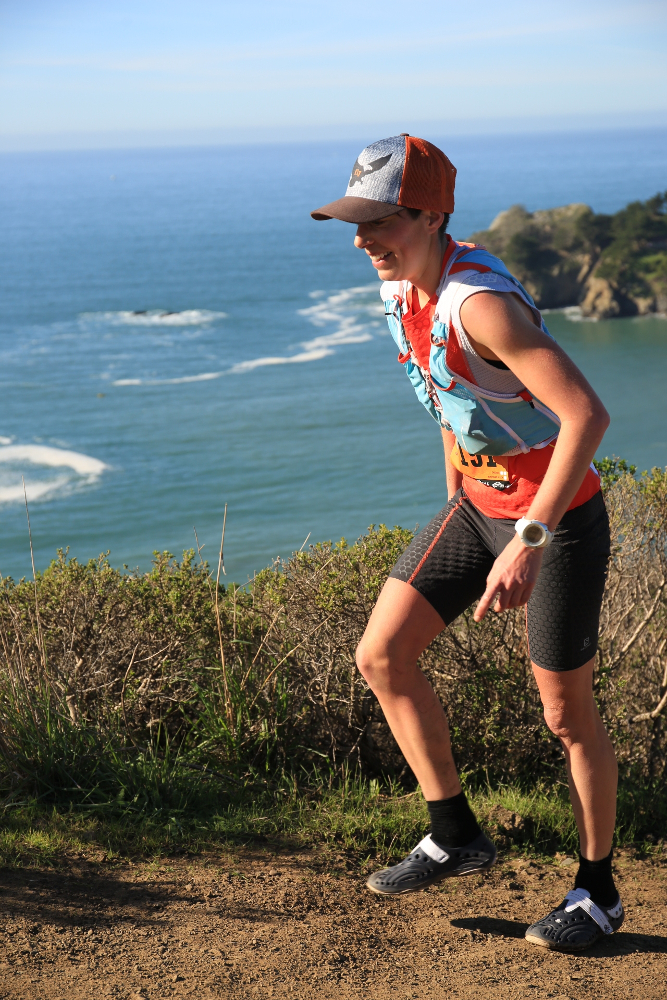 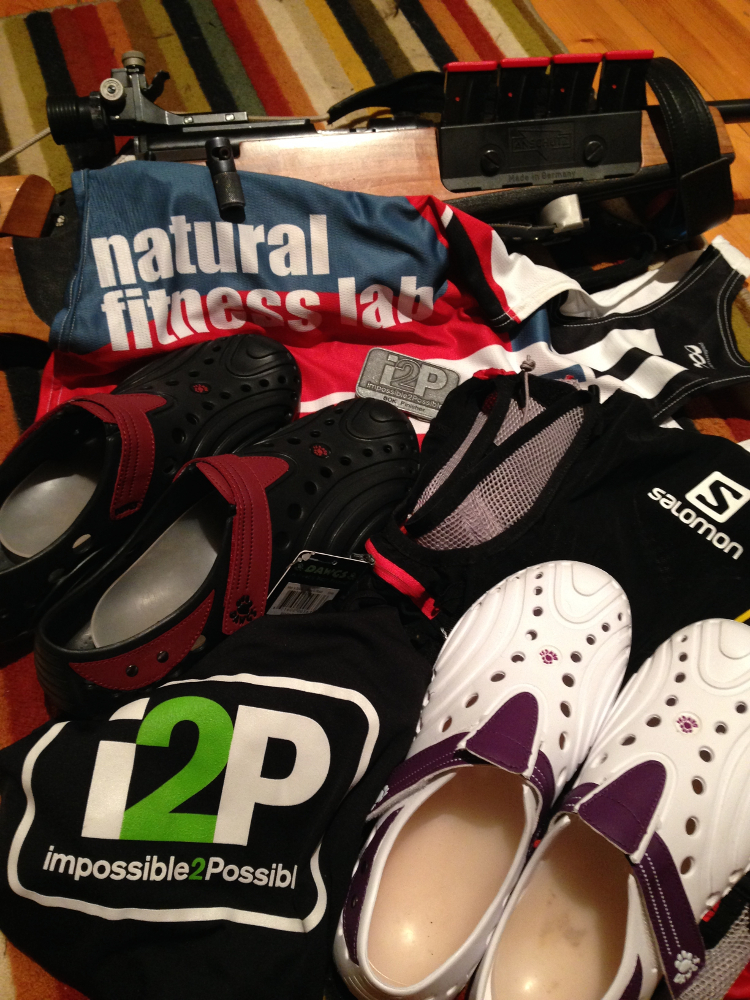 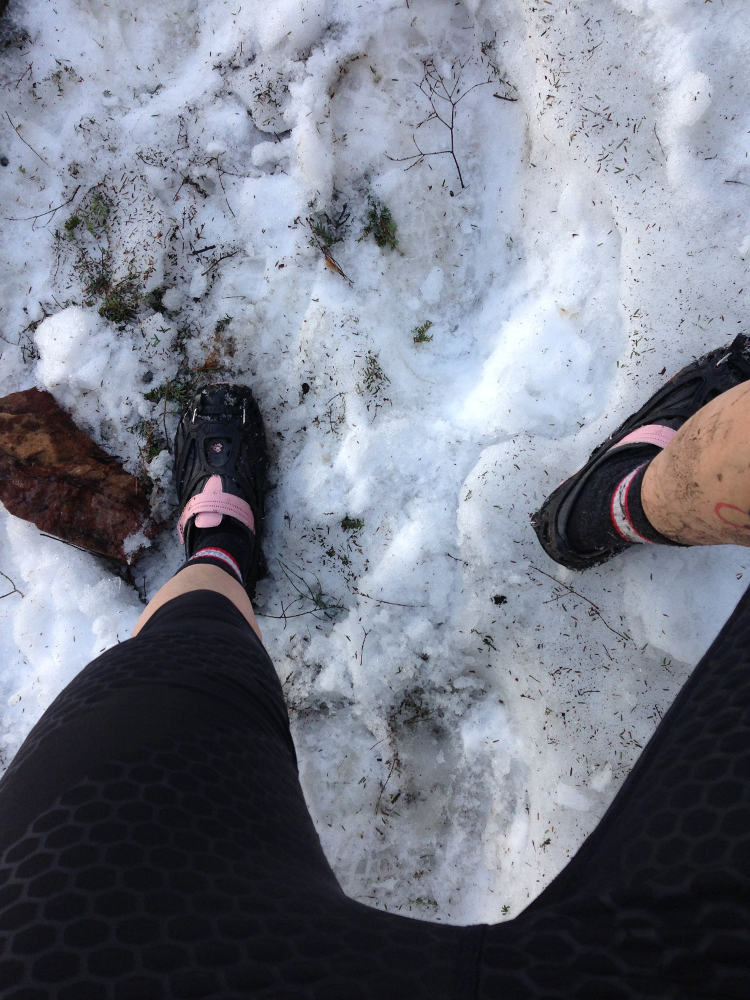 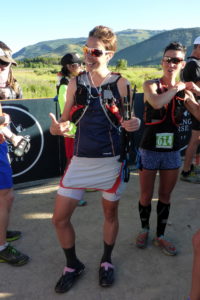 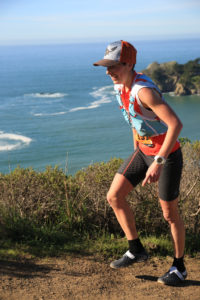 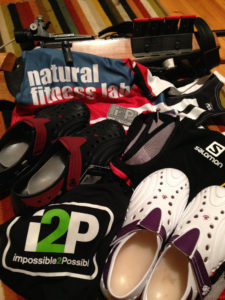 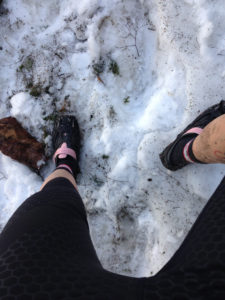 Chelsea, Que.’s Annie Jean prefers black or dark-coloured shoes so she doesn’t have to answer an inevitable question on a regular basis. The question is typically along the lines of “what are you wearing on your feet?”

The 35-year-old finished fourth overall and was top Canadian at The North Face Endurance Challenge 50-Mile Championship in San Francisco on Dec. 3. She covered the Gore-Tex 50-mile (80K) course in 7:24:41, which averages out to approximately 5:31 per kilometre on the hilly terrain in the Marin Headlands. She was in sixth for much of the race before moving through the field in the latter stages to finish four minutes off a podium that included U.S. Olympian Magdalena Boulet.

“I wasn’t expecting that,” she says. “The field of women were really fast and it was my first 50-miler. The race began in the dark so it was tough to tell where I was relative to the rest of the field.” IRunFar.com describes the elite fields as having “ridiculous competition” as select ultrarunners from across the world took part in the event. The North Face Endurance Challenge series began in 2007 and features stops across North America.

RELATED: CIS silver medallist Declan White on why he used to eat 20-25 bananas a day.

The race was one day after Jean’s one-year anniversary of having surgery to repair a kink in her external iliac artery. “It was like having a heart attack in my leg,” she says. The symptoms, including spasms, intense pain and fatigue, were in her glutes and lower leg but the incision was to the oblique muscle in early December 2015. She was back running by the end of the month hitting the trails for the first time on Dec. 26, 2015.

Through the winter, she was cross-country skiing, one of her passions outside of running as is cycling, and trail raced for the first time since the surgery at the Kal Park Dirty Feet 50 on May 1 in Vernon, B.C. There, she qualified for Team Canada for the 2016 Long Distance Mountain Running Championships in Slovenia. She finished 12th and went on to win the Ultra-Trail Harricana du Canada (65K) in September.

Jean trains and races in Dawgs, a brand of rubber footwear, specifically clogs, similar to Crocs, with orthotics. She calls them her “secret weapon.” The reason? They’re wide enough to accommodate orthotics and heavier, more-cushioned shoes aggravated her leg before surgery. She uses orthotics because her foot is flat and her arch collapses at foot strike. Now post-surgery, she continues to wear them as she has a pinched nerve in her foot and the wide landing area limits the associated pain.

“It [Dawgs] works for me,” she says. “But they’re not for everybody.” In the winter, she is able to continue running in Dawgs with thick socks, SmartWool being her go-to, and Kahtoolas, a brand of crampons. For muddy-plenty races, like worlds in Slovenia, the Dawgs are not an option. Among the 900-plus members of her local running club, it’s definitely a talking point.

The accomplished ultrarunner works as a podiatrist at Clinique Podiatrique de l’Outaouais, which sponsors her for race travel, and she deals with runners on a daily basis analyzing gaits, injury treatment and prevention and much more.

Jean was winning races well before her surgery. She qualified for The North Face Endurance Challenge Championships as an elite athlete by virtue of her performance and win at Run For The Toad 50K in Paris, Ont. in 2014. Her top-12 placing at worlds in 2016 also helped, she says. When she was doing trail races before the surgery, she says that “I had to stop every 500m and take a break before running again; people would pass me, and I would overtake them in a back-and-forth.”

She got into running while at the University of Ottawa and took up trail races four-to-five years ago. She has also competed in triathlons, including Ironmans, in the past. She works Monday to Thursday and runs every day at lunch. Weather permitting, she bikes to work.

The elite Quebec ultrarunner has a lifetime best of 2:56:12 in the marathon, set at the 2016 Ottawa Marathon, and ran 1:27:36 at the challenging MEC Gatineau Half-Marathon earlier this year. She chose to race the California North Face Endurance Challenge partly because she was in a hospital bed at the time of the 2015 event and it was on the to-do list. Four days after surgery, she was out of the hospital and walking again in an effort to buildup for 2016, a plan that paid off given her recent success.

“Now that I know The North Face Challenge [championship course], I want to do it again and would love to see how I could do,” she says of her future plans. Jean adds that she’s not interested in moving up to longer distances, like a 100-miler, because she likes to “go hard and go strong all the way but still be able to run or cycle the next day.”

All photos provided by Annie Jean.