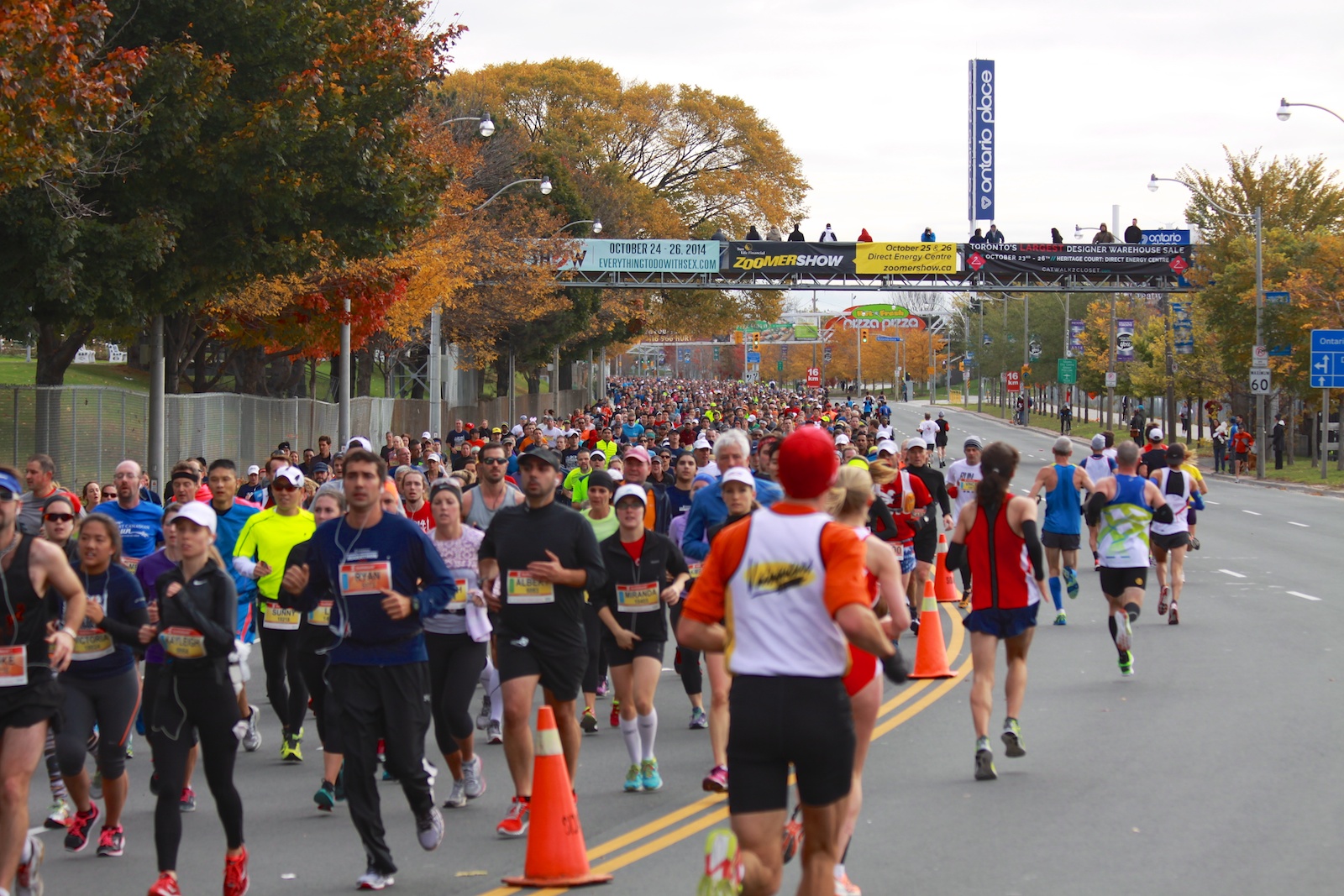 Come autumn, Canadian marathoners have plenty of reason to be excited.

With the hottest days of summer behind and with it the suffocating heat and humidity, the first signs of fall are always a welcome especially since for many runners—especially marathoners—that means racing season.

Fall is considered by many as the optimal time of year to run your fastest marathon. You’ve spent the last two months suffering through high heat and have acclimatized with favourable adaptations that will pay off when the temperature starts to drop. Long runs and workouts can now be done in more cool and comfortable conditions and paces which once felt hard should begin to feel easy after all those runs in the summer sun. As you taper for race day and begin to reduce your mileage, you also don’t seem to mind that the days are getting shorter.

Whether you’re training for your first or hoping to run your fastest 42.2K this fall, there are lots of great Canadian events to consider from coast to coast. September, October and even November feature several options and excellent events.

Goodlife Fitness Victoria Marathon, Oct. 9th –  Victoria, B.C. Celebrating 37 years in 2016, this popular event features a scenic tour of the city’s downtown and historic regions. Few events can compete with the fabulous views as runners pass through parks and alongside the Pacific Ocean on Vancouver Island’s south coast.

The County Marathon, Oct. 2nd – Wellington, Ont. A unique point-to-point Boston Qualifier course that starts in Wellington and finishes in Picton and features a rolling and scenic tour of Prince Edward County along the way.

Scotiabank Toronto Waterfront Marathon, Oct. 16th – Toronto, Ont. Toronto’s largest event from the Canadian Running Series is celebrating 27 years running in 2016. It’s a flat, fast and festive event that attracts some-25,000 participants, including 4,000 in the marathon. The revamped marathon course is perfect for producing fast times and personal bests as well as featuring a scenic city tour with a supportive atmosphere and excellent organization.

Niagara Falls International Marathon, Oct. 30th – Niagara Falls, Ont. One of few events to start in one country and finish in another, this is truly an international marathon. The point-to-point course begins in Buffalo, N.Y., and takes runners over the Peace Bridge into neighbouring Fort Erie. From there, it follows the Niagara Parkway to the finish near the majestic falls.

Road2Hope Hamilton Marathon, Nov. 6th – Hamilton, Ont. Hailed as Canada’s fastest Boston Qualifier and among the top ten in North America, the point-to-point, net downhill course can help any runner set a new personal best. The course begins in rural countryside then descends toward the city and runs along Lake Ontario’s waterfront before the finish in Confederation Park. 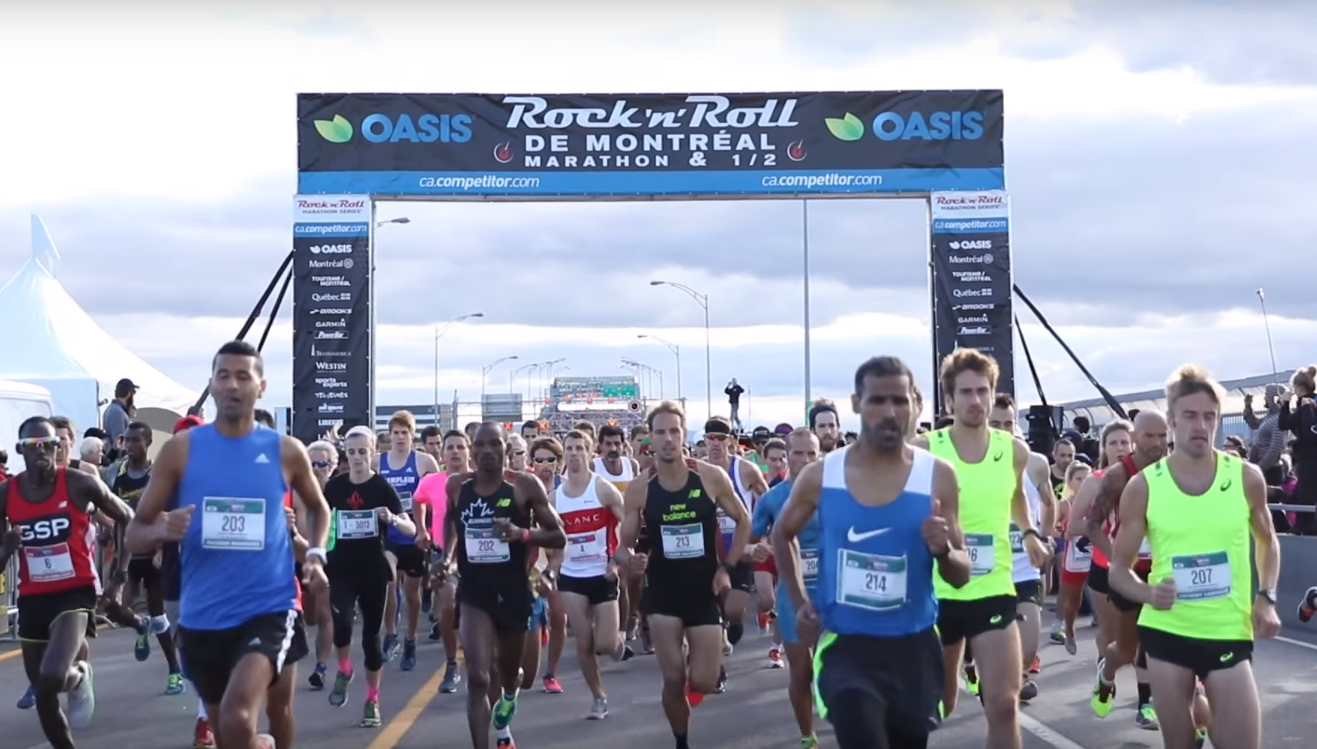 Marathon Oasis Rock ‘n’ Roll de Montreal, Sept. 25th – Montreal, Que. This official R’n’R event was the first of its kind and is still only one of two in Canada. The marathon offers a complete city tour that includes many of Montreal’s popular neighbourhoods and landmarks with boisterous support along the way.

Marathon de Magog, Oct. 30th –  Magog, Que. A late-season event in Quebec’s Eastern Townships, Magog is a scenic and small-town event. The marathon course is a double loop of the half course that is at times hilly but includes plenty of scenic countryside.

Maritime Race Weekend, Sept. 17th – Eastern Passage, N.S. In addition to spectacular coastline views, participants can expect a sea of supporters with signs, noisemakers and music along the way. The marathon tours the flat coast of Eastern Passage while showcasing the area’s interior beauty that includes rolling hills through Cow Bay and the groomed paths of the Salt Marsh trails.

Trapline Marathon, Oct. 9th –  Happy Valley – Goose Bay, N.L. Held annually on the Thanksgiving weekend, this event aims to highlight the community spirit and heritage of the Labrador region. The point-to-point course is unique, challenging and immensely picturesque. At the finish, all participants enjoy a buffet of traditional Labrador food and other festivities.

Cape Breton Fiddlers Run, Oct. 16th –  Sydney, N.S. A smaller event based in Cape Breton’s largest city, the marathon begins in Victoria Park and includes two loops of downtown Syndey before proceeding on a lengthy out-and-back to the turnaround point at the former South Bar School.  A second loop is required before finishing back in the park.

PEI Marathon, Oct. 16th –  Charlottetown, P.E.I. The largest and only event of its kind in the small Maritime province is a destination race for many. The marathon is a scenic and fast point-to-point course starting on the north shores of Prince Edward Island National Park. It follows the coast west before turning south and continuing over rolling hills towards the finish in downtown Charlottetown at the Province House National Historic Site.

Legs for Literacy, Oct. 23rd –  Moncton, N.B. The largest running event in the province and one that continues to increase in popularity, the marathon takes participants from downtown Moncton along the river via trails and roads and into the suburb of Riverview. After completing an out-and-back loop, the course continues back to near the start before another lengthy out-and-back into Dieppe before returning to the finish on Main Street.

For a complete list of runs and races from across Canada, use Raceguide.ca