The women’s 10,000m race was a shock to the world as it saw a new world record in one of the best performances in sports in 2016. The race is going to be one of the biggest stories in the Olympics and will be a race that is remembered for decades as Ethiopian runner Almaz Ayana unexpectedly smashed the world record to run 29:17.46. It is already being called the best 10,000m race ever– male or female.

The race went ahead with 37 women lining up at the start line. Eyes were on pre-race favourite Ayana who headed in to the race with a 30:07 season best. Her main competition was Tirunesh Dibaba (Ethiopia) and Vivian Cheruiyot (Kenya).

RELATED: The story behind Natasha Wodak’s inspirational “Be Brave” tattoo

After just two and a half laps, the field already was starting to spread out with runners in single file. That’s an unusual scenario for the beginning of the 10,000m. Kenyan runner Alice Aprot Nawowuna lead the race for the first half with Ayana hanging in second. Nawowuna looked strong although one of the questions with her leading at a sub 30-minute pace was whether or not she could hang in and keep up the pace. Her best in the distance is 30:26.94.

With 12 laps to go, Ayana made her move putting in a bold surge and taking first place. Vivian Cheruiyot moved into second, while the Kenyan who led dropped back. The pace at that point was set for well under 30 minutes with them making it through 5K in 14:46. It’s strange to see the pace at an Olympic race be that fast considering that athletes approach it from a tactical standpoint and don’t necessarily race for a blazing fast time and certainly not a record. In this middle part of the race, Nawowuna still held onto third, but it was clear she was beginning to tire–sitting in 40 metres behind Cheruiyot. The leading two runners continued at a sub-30 pace.

One of the main questions in this middle section was whether or not Ayana would set not just an Olympic record but a world record. Eyes in the crowd focused on the pair with the main story not just being who would win the gold medal but more importantly, whether or not she could break the controversial world record set by a Chinese athlete back in 1993. While championship races are usually tactical and not fast, spectators were on the edge of their seats wondering whether or not Ayana would go under the record of 29:31.78. 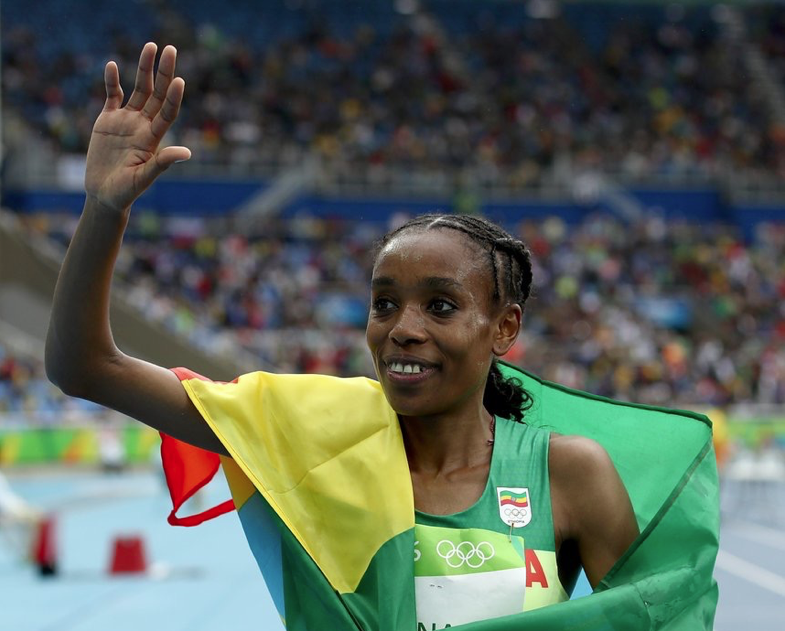 To put this race in context to understand just how remarkable it was, only five women have ever run under 30 minutes for the 10,000m. It also hasn’t happened for seven years and the record is 23 years old. Ayana was set to not only go under the mark, but to smash it. This is the stuff you would expect from Diamond League racing with pacers–not the Olympics where the goal is to medal.

Ayana went into the bell lap with the record definitely in her future. The question was how much would she break it by and would Cheruiyot also better the 29:31.78 mark. She obliterated the record by 14 seconds, running a 29:17.46. While she was the pre-race favourite, it was definitely not expected that the Ethiopian would go anywhere near this fast.

Cheruiyot’s performance should not be undervalued, as she just narrowly missed breaking the old world record as well. She crossed the line in 29:32.53 which is a national record for Kenya. Dibaba took bronze after being off last year to have a child. With her time of 29:42.56 she can celebrate a sub-30, a PB and an Olympic bronze medal. Nawowuna also ran to a new PB with her time of 29:53.51 in fourth.

Lanni Marchant, Canada’s marathon record holder, and 10,000m national record holder, Natasha Wodak, raced well in this history-making event. The two went back and forth with their performances heading in, so it was hard to know who would be the first Canadian to cross the line. While Wodak has the faster PB, Marchant is a natural when it comes to this level of racing–and she deals with the pressure quite well. That said, Marchant started the race this morning knowing that she had a marathon up ahead in just 46 hours.

In the end it was Wodak who was the first Canadian to cross the line, running 31:53.14 to place 22nd. It’s a season’s best time for the native of Vancouver. That’s good news for Canada and an impressive run for Wodak as not many women in this country have gone under 32 minutes. Her national record stands at 31:41. Marchant was not far behind her and also ran a strong one in her best 10,000m of the year. Marchant finished 25th running a 32:04.21.