Lanni Marchant and Krista DuChene lined up at the start line of the women’s marathon in Rio on Sunday morning to become the first Canadian women to represent the country in the event for the past two decades.

Marchant landed herself in the top 25 with a time of 2:33:08 for a 24th place finish. It was the second part of a historic double, just 46 hours after competing in the women’s 10,000m. That became one of the most exciting races in distance running history, with Ethiopia’s Almaz Ayana setting a new world record of 29:17.46 to shatter the previous mark.

At 39, DuChene battled back from a horrific broken leg suffered mid-race in 2014 to qualify for Rio. The mother of three trained relentlessly since running the standard for the marathon in April of 2015, balancing home life and the demands of Olympic-level training.

We chatted with both women from Rio, the day after their historic marathon experience.

“That’s the smartest marathon I think I’ve ever run. I have to be happy with that.” – Marchant

She felt confident and ran smart. When she was aiming to prove to herself and others that she would in fact be able to double in the 10,000m and the marathon, she competed a 30K simulation run at a 3:38 pace. That happened right after the 10K championships. This experience allowed her to feel extra confident on the course in Rio yesterday morning. “I knew I could be competitive–at least to 30K,” Marchant says. She went in excited and mentally strong, paid attention to proper hydration since it was so hot and ran exactly how she wanted to. “That’s the smartest marathon I think I’ve ever run. I have to be happy with that,” she says.

It was an aggressive one. “Once you’ve run in an Olympic marathon, it’s a game changer,” says Marchant referring to the aggressive start. Her bib was ripped off, she’s got a sizable scratch on her back and women would not move over at the water stations. Running against the most talented women, she now sees how aggressive it can be.

Despite having just raced the new world 10,000m champion, she was looking forward to it. “I honestly thought I’d have a lot of dread and nerves,” says Marchant. That didn’t happen though. The 10,000m was quite the race and from the moment she finished, she was excited to run the marathon–a distance she excels at. “That’s the most I’ve been excited for a marathon for a long time.” 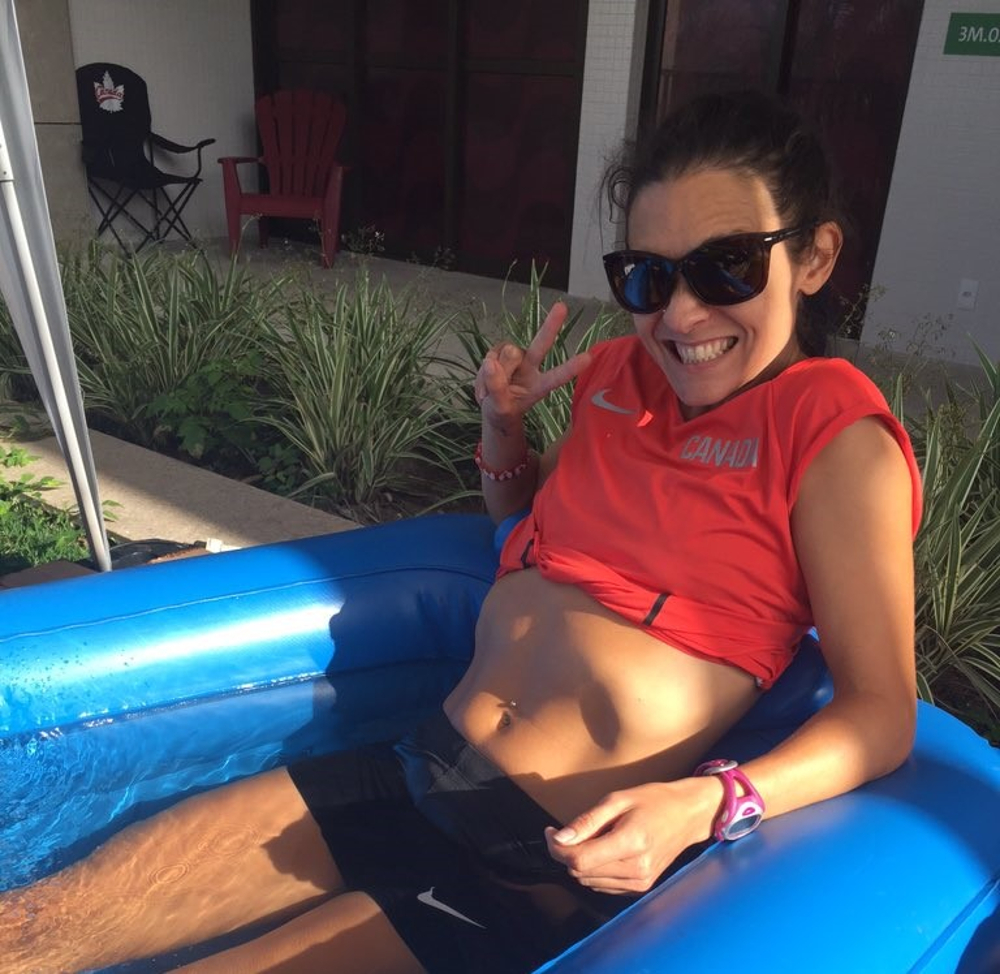 What did she do between races? That one is simple: carb loading, treatment and lot’s of ice baths. That may not be as exciting as the usual post-race routine, but it was necessary to get it done and she was well aware that not only did she still have to run a marathon, but she had to run it well.

On being the first Canadian woman in the event since 1996: The goal was to make it to the Olympics in the marathon. That she and DuChene were the first Canadian women to do so since 1996 was extra special. “I hope it’s harder for me to make the team in 2020,” Marchant says adding that there will be many talented women running. “There are plenty of women and girls who can accomplish a similar feat. Krista was a full-time mom, I was in my first year as a lawyer. We’re normal people.”

She celebrated with beer, beach time and watching track. That celebration happened with family. They had some beer and then Marchant went to dip her feet into the ocean. Then it was back to Canada House to watch the other track races.

Key highlights: Having family there and getting encouraging messages from fans. It still hasn’t quite sunk in. She put a lot of work in and has been appreciating all the supportive messages she has been getting since she ran. A big highlight was having her family there. They were at the warm-up track for the 10,000m and she had them there cheering and at the finish line, too. “I’m really proud of how I raced, but they have been there every step of the way,” she says.

Low lights: A difficult final seven kilometres and some cramping early on. For anyone who watched the marathon, they would have seen some hairpin turns in the finals stages. That made it difficult to gather speed for the final seven kilometres, Marchant explains, and it wasn’t an enjoyable end of the course for many athletes. “A lot of us lost a lot of time in that 7K,” she says. Another difficulty she experienced was hamstring cramping early on but it luckily didn’t turn into anything problematic.

“It was that Olympic experience you hope and dream about.” -DuChene 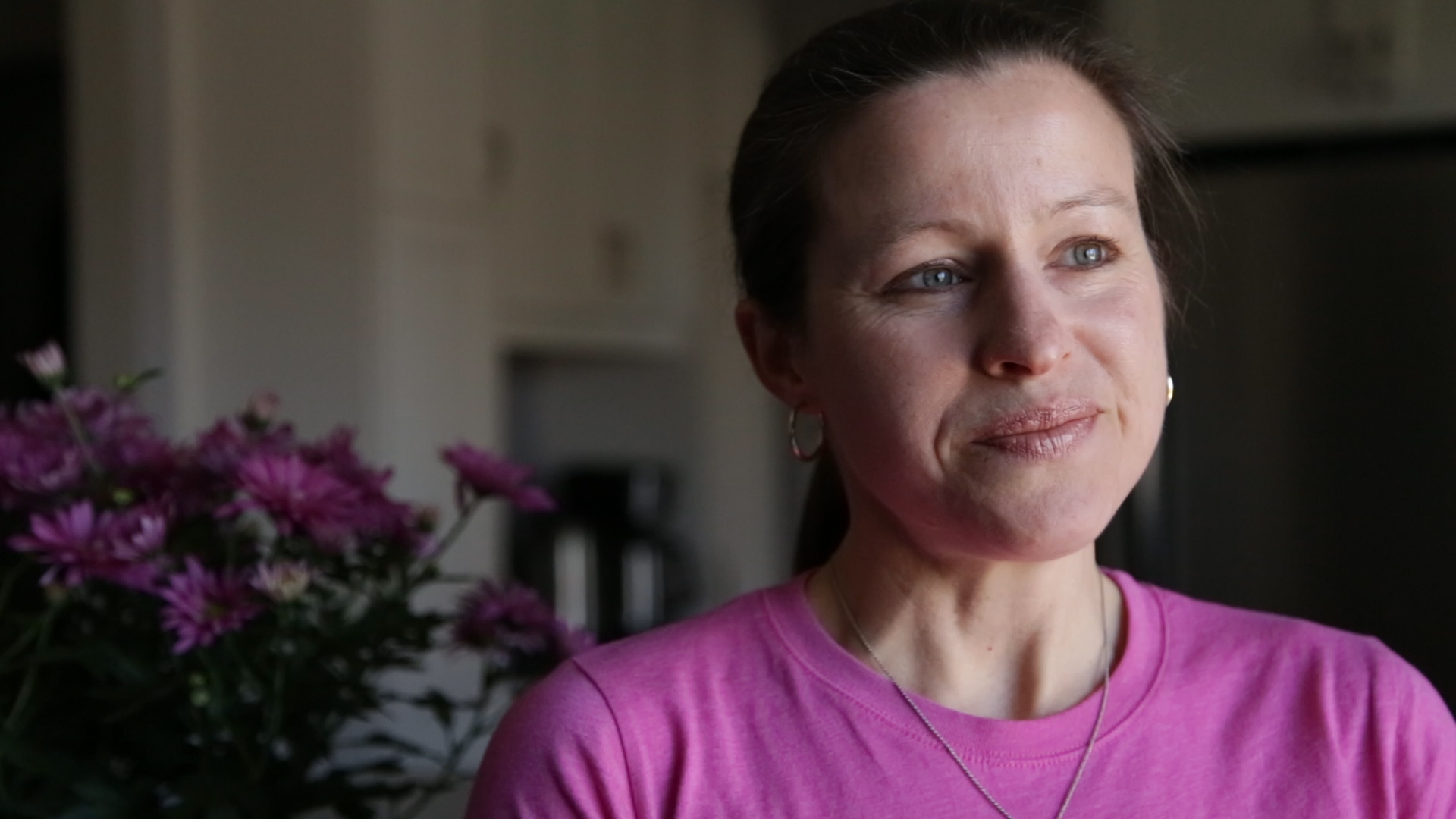 Her Olympic dream came true. “Physically, I’m feeling well. I’m a little sore but no injuries, nothing I can complain about,” she says. Speaking purely of emotions, she says she’s feeling incredible and that everything she hoped for came true. “It’s that Olympic experience you hope and dream about.” DuChene said of her great day in Rio. Everything played out perfectly.

#CAN Krista DuChene is pumped up after crossing the finish line! #Rio2016 https://t.co/JAoL0ve2RK https://t.co/QzDTpv5cTz

Training in southwestern Ontario lends well to running a marathon in Brazil. To avoid struggling with the heat in Rio’s tropical climate, DuChene put a lot of effort into training in heat–including making use of the sauna. Running in the humidity of southwestern Ontario paid off. “The heat and humidity were ideal for training all summer. It allowed me to appropriately adjust my pace and feel well while competing.”

Without her family, it wouldn’t have gone this well. DuChene’s role as a mother has always been something that she has emphasized. Having the support of her husband and kids is one of the biggest rewards not only to have them there after the race, but also to have her back during training. “This summer, they did the housework. In my family, it’s about team work,” she says. Now they get to relax at the family cabin and enjoy plenty of desserts.

On being the first Canadian women to run it since 1996. “I played hockey as a child with all boys. Paving the way and being a leader in that sense is an honour. I’m honoured to be in that position and get ourselves back out there again,” says DuChene.

On coming in to the finish: “The end was amazing. I pumped my fist and the crowd went wild. I thought ‘I’m going to enjoy this for all it’s worth,'” says DuChene. To viewers watching from Canada, her excitement and appreciation for her Olympic experience was evident.