One of Canada’s best runners at the Paralympic Games is celebrating in Rio right now as he has done what many Canadians have dreamed about but few athletes have actually completed. Jason Dunkerley has now represented Canada in every Paralympic Games since 2000.

This year’s performance in Rio marks number five for him.

Having already competed on the track for Team Canada in 2000, 2004, 2008, 2012, means that his 2016 is the final point to bump his Paralympic tally to five. At the age of 39, Rio 2016 could also have been his last. The Canadian runner was born blind but discovered his affinity for running and now, his career highlights include his Paralympic performances where he accumulated three silvers and two bronze medals as well as running for Canada at World Championships four times and running at the Parapan Am Games.

He has certainly racked up achievements on the track. In Rio on Tuesday night, he came fifth in the men’s 1,500m T11 final. (T11 is the category representing visually impaired runners.) Dunkerley was led by Josh Karanja to a finishing time of 4:07.98.

While he didn’t earn himself a spot on the podium this time around, that was a season best time for the runner. The winner of the final was Kenyan runner Samwel Kimani who seized the gold medal in 4:03.25. 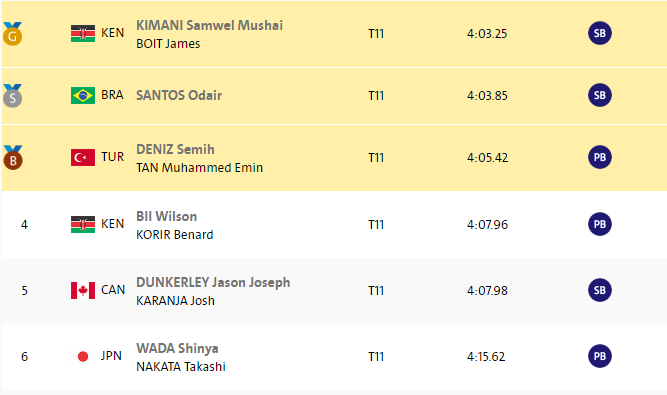 Dunkerley started running in elementary school but began running more competitively in high school. With a fifth Olympics now under his belt, Canada will be watching to see where he goes now from here. In case you missed the action on the track, see his Rio race below: