The agony and the ecstasy of the 50K racewalk was on full display down by the beach in Rio on Friday morning. 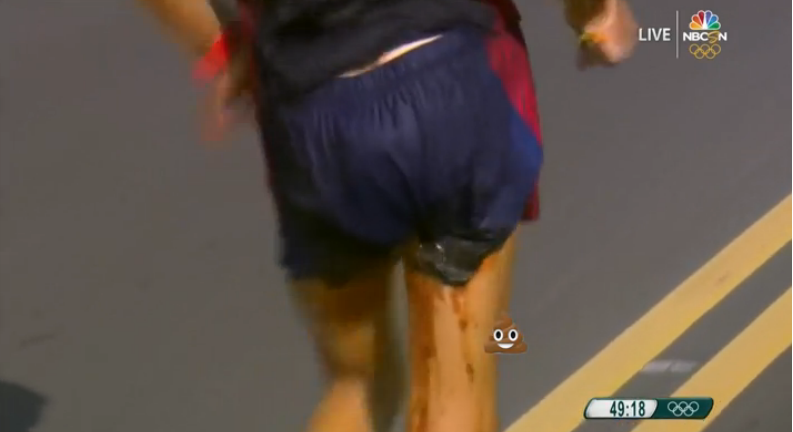 Frenchman Yohann Diniz led the until about the mid point, a dizzying 12 of 25 two-kilometre loops on a quiet residential street, when he started to falter, appearing to, well, defecate himself. He was then passed by a group of walkers, including Canada’s Evan Dunfee.

The Canadian then walked away from the pack and led the race for about 10K. He was gradually reeled in first by Australian Jared Tallent before being caught by eventual winner Matej Toth of Slovakia and Japanese walker Hirooki Arai.

ICYMI | Another look at what happened in the final stretch of the race walk. @AthleticsCanada has filed a protest. https://t.co/m8vL9Cc2MZ

Dunfee rallied, putting in a near run (but not running, because that would be illegal) and caught Hirooki Arai, who when not running serves as a lieutenant in the Japan Ground Self-Defense Force. The feisty Japanese walker fought back (literally), surged again on Dunfee and appeared to thrown a nasty body check on the Canadian. Dunfee then withered, nearly collapsing before again righting himself and making a spirited push to finish in fourth overall.

Slovakian Matej Toth easily won in the end, making it look like a walk in the park, even though it was in fact a walk in the city, although tantalizingly close to the beach. As a point of reference, the Slovakian split the 42.2K mark in around 3:06, which is nearly an hour faster than the average Canadian runs a marathon. He finished the 50K in 3:40:58.

The racewalk is defined by one basic rule: you can’t be off the ground with both feet (a.k.a. you can’t run). There are officials along the 2K looped course to penalize running. Somehow, these men are able to walk at about 4:25/km.

Diniz, who collapsed at the 2:44 mark after stuffing watery sponges down his pants in an attempt to clean himself up/cool himself down, somehow managed to finish. His time of 3:46:43 and eighth overall could be considered as impressive as actually winning gold, considering what he looked like at the finish line.

Dunfee also looked rough, falling to the ground and requiring medical attention as he finished in 3:41:38, for a heartbreaking fourth place. It was still a 50K racewalking national record.

After the Japanese bodycheck, Athletics Canada were quick to protest the placement. Arai has been disqualified for the contact, and Dunfee awarded the bronze medal. The Japanese team are said to be protesting the protest.

Who ever thought a walk along the beach would be so dramatic.

UPDATE: The IAAF has overturned the Canadian appeal and the Japanese walker has been given back the bronze. Dunfee is now back in fourth place. See Dunfee’s statement on the decision.

Just want to find someone who loves me as much as Diniz loves his sponge#racewalk #Rio2016 pic.twitter.com/PO01B8qgjW