With aerodynamic uniforms aimed at reducing fractions of a second in a race, it’s strange to see unusually large race bibs at the Rio Olympics. The bibs, which display an athlete’s last name, are wore on the front of an athlete’s singlet during races.

It’s safe to say that the bibs need a little bit of work, both in the spell check department and in regards to consistency.

Katarina Johnson-Thompson had to wear a misspelled bib for the opening day of the women’s heptathlon. Fortunately, she received a revised version on the second of two days in the seven-discipline event. Someone forgot the “n.” 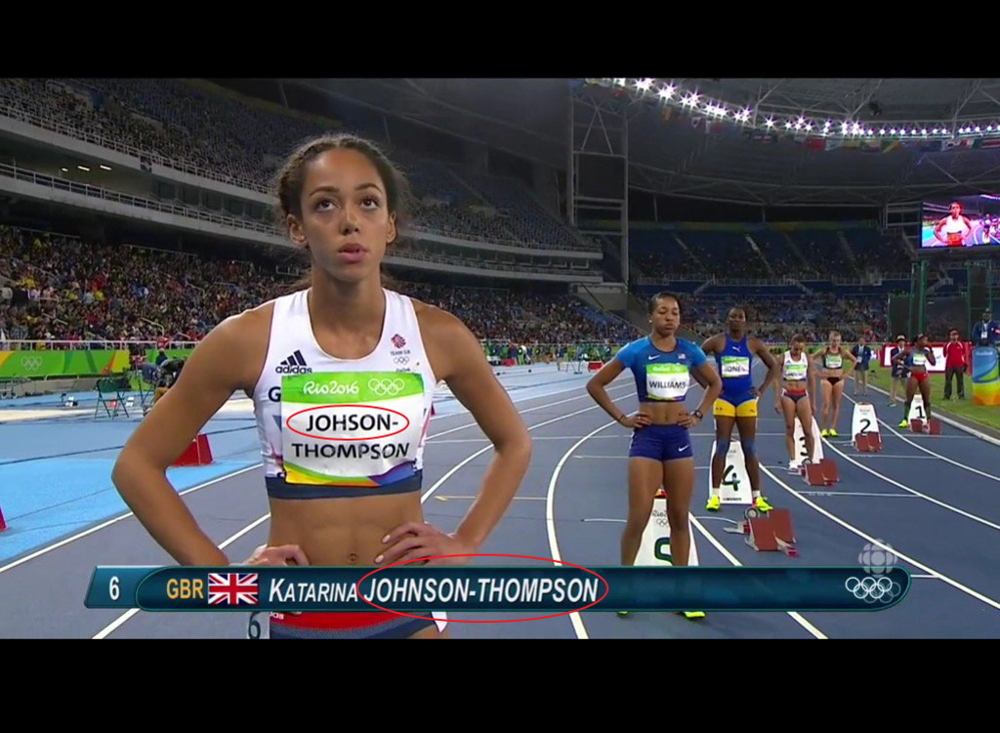 The typo was just the first in a number of photos captured during the Olympics where athletes are seen wearing bibs with different fonts in varying size. For shorter names, the gap between letters is huge rather than the name being centered and the letters condensed.

The topic has seen an uptick in popularity recently thanks to a Twitter campaign. The Rio bibs have been trending on the social media platform this week with the tag line “The bibs at Rio are the worst and it is not OK.”

RELATED: Photos: The best and worst track kits at the 2016 Rio Olympics.

There’s been a lack of consistency in the design of the bibs. In the men’s 3,000m steeplechase, for example, Ezekiel Kemboi had non-bolded print while Evan Jager and Hamid Ezzine had the bolded version.

First global medal for @EvanJager is a #Silver

Tenth global medal for Ezekiel Kemboi is a #Bronze#Rio2016 pic.twitter.com/VX05XnjgfE

Forget the keirin, the bib fonts are the real shambles of #Rio2016 pic.twitter.com/q3llCDm6jM

Twitter users are not too happy with the design choices

The bibs for rio are trash

Honestly, these Rio #athletics bibs are such a trainwreck. Come on, @iaaforg. @sebcoe, don't let it happen in Tokyo!

The irregular fonts on these Rio bibs are really starting to get to me. Genuinely concerned that they'll start using Comic Sans by the end.

Most under reported story of #rio2016 #athletics. The random bib fonts, never know what you're going to get from session to session.

I don't understand why the letters on bibs are different sizes at Rio.

Canadians Sage Watson and Noelle Montcalm got the bold print

Look out for Sage Watson & Noelle Montcalm in the 400mH semis tonight. Both have an eye on advancing to the Olympic final. #rio2016 #olympics

MEDAL ALERT: ?? @de6rasse wins bronze in the men's 100m! It's been 20 YEARS since a Canadian has won an Olympic medal in the event. ?: Team Canada. #CanadianRunning

The Rio bibs come after Nike used redesigned name plates at the Prefontaine Classic in Eugene, Ore. The bibs, known as AeroSwift Bibs, do not require safety pins and instead adhere to clothing. Perhaps, newer designs will be seen at the 2020 Tokyo Olympics the next time around.