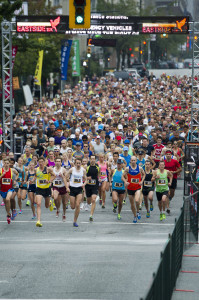 Rob Watson, a staple on the Canadian marathon scene, will be joining a strong field of runners for the second annual Vancouver Eastside 10K on Saturday, Sept. 13. Rob and fellow BC Endurance Project athlete, Kelly Weibe, will be using the event as a final tune up for the upcoming Scotiabank Toronto Waterfront Marathon on Oct. 19 where they will face stiff international competition.

“There is so much support for Canadian athletes,” said Rob Watson “Alan Brookes, Clif Cunningham and the whole Canada Running Series team do a really good job taking care of us. It’s a nice relaxed vibe and all you have to do is go out there and run.”

The women’s race promises some equally tasty battles. Defending Eastside 10K champ Lioudmila Kortchaguina of Toronto is returning to challenge for two in a row. Kortchaguina, a fixture in Canada Running Series races will also be gunning to improve her course record of 33:57 that she established during last year’s inaugural race.

“We are so pleased with this year’s field of elite athletes,” said Race Director Clif Cunningham. “We look forward to providing a top notch event for all of our competitive runners and for those who are just running for fun.”

Edited from a press release.