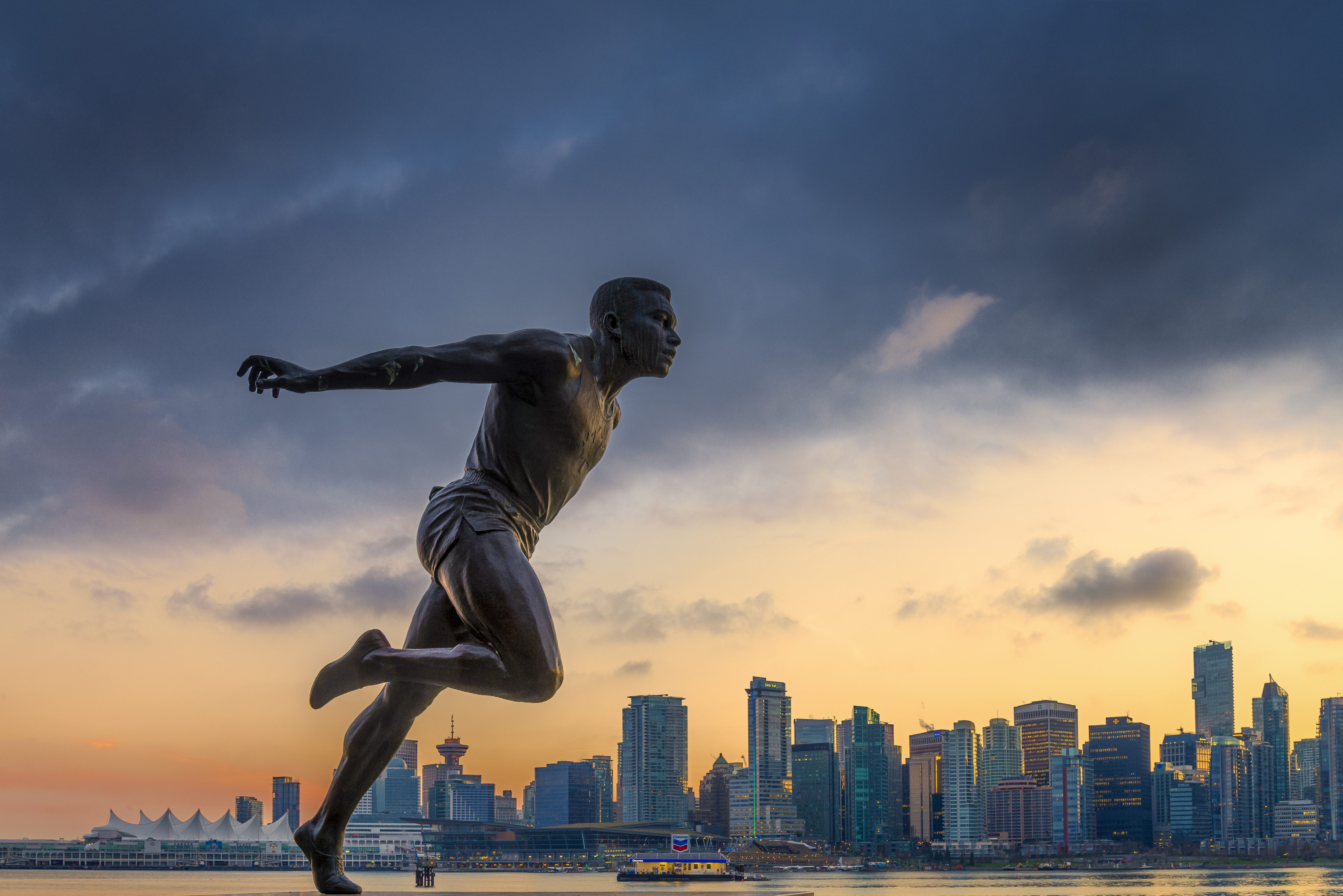 Vancouver is home to some of the most beautiful natural scenery in the world.  There are a plethora of running routes right in the city – through its remote trails,  lush forests, sandy beaches, paved paths  and along its stunning Seawall. It’s no wonder Vancouverites are considered among the fittest urbanites in the world.   Vancouver hosts a number of popular       races, including the Scotiabank Vancouver Half-Marathon held in late June, which       is one of the fastest half-marathons in Canada. It starts at the University of  British Columbia (ubc) and runs down  along the oceanfront from Spanish Banks to Kitsilano Beach, finishing in Stanley       Park. The bmo Vancouver Marathon, held  at the beginning of May, provides a similarly       scenic tour of Vancouver and was voted as a Top-10 destination marathon by Forbes in 2013. Vancouver’s mild winter weather makes February’s First Half halfmarathon an ideal choice for those looking for a fast and scenic winter race.

Jericho Beach- 5K Running along the gravel path through Jericho  Beach and Spanish Banks offers a spectacular view  of English Bay the North Shore mountains, downtown Vancouver and Stanley Park. It is also tucked away from the hustle and bustle of Kitsilano Beach, offering a more peaceful venue for an oceanfront run. The path is  sandwiched between an expansive sandy beach and a grassy park. The path begins just  past Wallace Street on Point Grey Road, next to a large parking lot and the Brock House  Restaurant. Head straight down the path, veering left past the first concession stand.  After a few hundred metres you will pass through a dirt trail where you will likely be met by herds of wild rabbits enjoying berries from the blackberry bushes. After 1k you will pass by the Jericho Sailing Centre, which rents kayaks and canoes and offers   windsurfing and sailing lessons. It is also a great spot to quench your thirst after a hot  run, as they have a restaurant upstairs that offers a phenomenal view of the ocean and  mountains. Turn left once you pass the Sailing Centre. Cross a small parking lot next to another concession stand: bringing you to Locarno Beach then Spanish Banks. The       beaches and grass along this stretch of the path are popular venues for beach volleyball       tournaments during the summer. When you hit the fourth concession stand, you can  loop around it and retrace your steps all the way back to the first concession stand for a  total of 5k. Alternatively, you can continue along the path to a large cement anchor that  is a few hundred metres short of the official end of the trail (and thankfully escaping the large climb up to ubc), for a total of 7k. Once you decide to turn around, the route  back offers a breathtaking view of Stanley Park and downtown Vancouver. And while the beach is a great place to run in the summer, the sunsets at dusk framed by the snowcapped mountains and the glowing ski lights at Cypress Mountain in the winter make  Jericho an ideal place for a run all year round.

Burnaby Lake- 10K  Burnaby Lake is the largest lake in the Lower Mainland and is a 30-minute drive from downtown Vancouver. The lake is encompassed by a f lat 10k trail that       periodically breaks into scenic views of the lake and mountains.       The f lat, dirt surface is ideal for a light, easy run. The best place to       enter the lake grounds is by the sports field, since it is close to a       large parking lot and the SkyTrain station. To get to the trail from       the parking lot, run past the Rugby Club along the narrow path       parallel to the grass field. Once you reach a line of trees at the end       of the path, turn left onto the gravel road and you will see the       main dirt trail on your right. Shortly after, you will pass straight       through another parking lot and the trail will pick up again on the       other side. Turn left at the fork in the path and continue across the       bridge, where you will be greeted with beautiful views of the lake       and the North Shore Mountains. You will pass over some wooden       boardwalks covering a murky swamp, eventually meeting a horse trail. Follow it north until you see a trail on your left that       will lead you to a grassy clearing and a dam. Cross the dam to the  other side of the Brunette River and go left. Once again you will meet a point before the trail veers right with a beautiful view       of the lake. Keep following the main trail until you see a small  wooden bridge and a nature house. Here, you can walk or run out  to Piper’s Spit to observe wild ducks and geese. When you go back  to the main trail, you will see another short side route leading to a rustic viewing tower that offers a spectacular bird’s eye view of  the lake. Once back on the main trail, follow it as it winds along  the north side of the lake and into a long stretch running parallel       to the train tracks. Finally, the trail turns to the left and continues       into a wooden bridge that crosses Still Creek. Here you may spot beavers swimming through the calm waters. Stay to the right after crossing the bridge and you will be back at the parking lot where you began.

The Seawall- 24K       The Seawall encompassing False Creek and Stanley Park is one of the most beautiful and renowned running routes in Vancouver. This long run can accomplish more than a day’s worth of sightseeing, covering Kitsilano Beach, Granville Island, False Creek, English Bay and Stanley Park. It runs entirely along the waterfront, providing dynamic ocean views. Begin by the Kitsilano Beach parking lot on Arbutus Street and Cornwall Avenue and head north on  the seaside bicycle route. The path will wind to the right and you will pass the Maritime Museum, home to many excellent  exhibits on the history of the Pacific and Arctic oceans. Turn left down the bicycle path that extends around Vanier Park and straight through the boat launch parking lot. The bicycle route  will pick up on the other side and wind around a large building, connecting to Creekside Drive. When you reach First Avenue,  take a sharp left and you will merge into the Island Park Walk  hat borders Granville Island. Cross the road under the Granville  Street Bridge and, after Sutcliffe Park, turn right to get back onto the seaside bicycle route. Stay to the left of the path all the  way to the Cambie Street Bridge, climb the stairs and cross the       bridge to the east side, exiting off a winding paved pedestrian   oad that leads back down to water level. Here follow Marinaside       Crescent Road, where you will reunite with the seaside bicycle  route. Head north, back toward the Burrard Street Bridge. Once       you pass underneath the Burrard Street Bridge and past the       Aquatic Centre Ferry Dock, stay on the lower bicycle route. For       the next 10k you can mindlessly absorb the views of the North       Shore Mountains and the water as you wind naturally around the       English Bay and Stanley Park Seawall. You will pass the Olympic       Rings and the Inukshuk statue before entering First Beach and       Stanley Park. A few kilometres later you will reach Prospect Point,       which offers a stunning view of West Vancouver, the mountains       and the Lions Gate Bridge. As you head back toward English Bay       you will pass by Brockton Point Lighthouse and the famous nine       o’clock gun. Once you find yourself parallel to Georgia Street,       take the first right down an underpass that runs back to the west       side of the park. Follow the bicycle route around the perimeter of       Lost Lagoon and take the first left onto the seaside bicycle route       that leads back toward English Bay. Stay on the upper bicycle       path heading back toward the Burrard Street Bridge. Just before       you reach the Aquatic Centre, turn left up Thurlow to Pacific       Street. Turn right on Pacific and then right onto the Burrard       Street Bridge and head back into Kitsilano. It may be hard to look       anywhere but your feet at this point in the run, but it is worth       lifting your head on the bridge to see the majestic view of English       Bay and the North Shore mountains to your right. Merge onto       Cornwall after the bridge and head straight until you get back       to Arbutus Street where you began. Directly across the street       from your finishing point is one of the most popular patios in       Vancouver, the Local Public Eatery, which is the perfect venue for       post-long run drinks and food.