Yomif Kejelcha, for the third time in three weeks, is going to attempt an indoor world record. A lot has to come together for a world record to happen. You need the athlete to be ready, ideally a pacer who can run part of the race, and a good track to run the event on.

The 21-year-old Ethiopian middle distance runner attempted and narrowly missed the mile world record at the Millrose Games on Saturday February 9. He ran 3:48.46, a heartbreaking 0.01 seconds off of the record, which is currently 3:48.45 and held by Hicham El Guerrouj of Morocco. That day he had a great race environment, a pacer and a strong field to run with, but was still unsuccessful in his attempt. 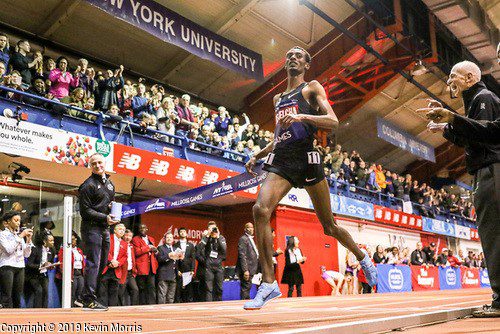 Kejelcha has also suffered an upset since his near miss of the mile world record. Following Millrose, he went on to race the 1,500m at Birmingham where he was poised to break the 1,500m world record. He sadly lost to 19-year-old Samuel Tefera, who ended up taking the record for himself at 3:31.08.


Kejelcha will line up at Boston University on March 3 following the Eastern Collegiate Athletic Conference Championship and attempt the mile record for a second time. It’s yet to be confirmed who will be entered in the race and if there will be a pacer for the event.

Since Kejelcha’s initial attempt, every aspect of the runner’s race has likely been examined. There was footage of him moving into lane two in the final straight away which was suggested to be worth 0.01 of a second. Another running analyst suggested that the bank on the Boston track is reportedly the ideal angle for a mile world record.

Thankfully, it’s much easier to run world record attempts in quick succession in a shorter event like the mile, whereas marathoners have to wait years for the right time. But if Kejelcha doesn’t make it happen on March 3, he too may have to wait a while for another attempt. By Marhc 3, the indoor season will be winding down and Kejelcha will likely be interested in gearing up for his outdoor season, as opposed to staying sharp to chase an indoor record. The race will be live streamed on Runnerspace.com.