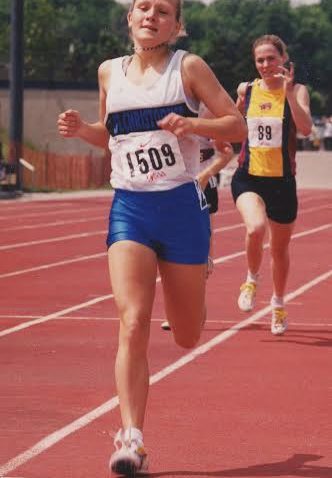 Cambridge photographer George Aitkin has been photographing runners of all abilities for decades. It’s arguable that his collection of running and track photos is one of the best in the country. Every so often, we take a look at these races of the past to bring you back in time.

This Thursday, we’re getting nostalgic and throwing it back to the 1999 OFSAA track and field championships in Etobicoke, Ont. The moment photographed here is when an athlete who is now in the mix to represent Canada on the track at the Rio Olympics won her 800m race.

RELATED: Throwback Thursday: Where are they now?

Can you name the athlete?

It’s Hilary Stellingwerff– or Hilary Edmonson, as she was known as at the time. On this day, Edmonson crossed the finish line to clock a 2:14.12. Behind her was Aleccia Boland and Many Osmond.

Stellingwerff is now 34, a married mother, a coach and in the mix to potentially run for Canada in Rio this summer. In fact, just last week, she ran her fastest 1,500m in four years. It was also her fastest since giving birth. She clocked a 4:05.61 which met the Canadian standard.

She will have to wait and see if she’ll be named to the team after competing in the Canadian track and field championships in Edmonton next month. However, after her recent performance, she’s at least proved that in 2016, she’s still a fierce and fast one.

Oddly, enough, before her meet, someone stopped her to ask her if she was running her high school meet. Seems like she hasn’t aged much since she actually was in high school!