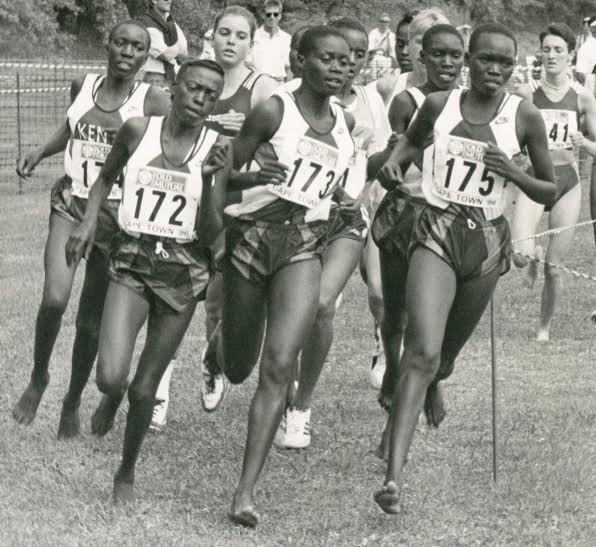 Catching us up on important moment in running history this season in Cambridge, Ont. photographer George Aitkin. Aitkin has been photographing runners and races for decades. This week, we’re going back in time to the 1996 world cross-country championships in Stellenbosch, South Africa. We chatted with Aitkin about this day and what’s going on in his photo.

CR: Give us an overview of what was going on at this moment.

GA: This was at the world cross country championships in Stellenbosch, South Africa in 1996. Many of the junior girls from Kenya don’t run in shoes and the worlds is no exception. From the left (174) is: Edna Kiplagat, Caroline Jepkoech, Elizabeth Jeptanui and Nancy Kiprop. They were tenth, ninth, and fourth respectively.

RELATED: You know you run cross-country when…

GA: The winner, Kutre Dulecha of Ethiopia, is directly behind number 173. At this moment, they were zipping along at just under three minutes per kilometre pace, chatting amongst themselves.

CR: How did you end up at this race? What other memories do you have from it?

GA: It was March of 1996 and I travelled and stayed with the Canadian team. We stayed in Capetown for a week before the races to help the athletes acclimatize since it was summer there and winter in Canada. Nevertheless, the weather was hot and many suffered.

The race course snaked around a very flat route then at the end of each lap, entered the stadium via a steep ramp that took the runners up and over the seating area. It was the only hill on the course. As the leaders in each race passed the kilometre points, red flares were fired into the sky. That way spectators could tell where the pack was. The junior girls’ race winner ran the 4.25-kilometre course in 13:27.

RELATED: Throwback to 1984 cross-country. Where are they now?

At the end of the championship schedule, there was an open six-kilometre race which I was able to enter and despite the tiring day in the heat, I finished in 23 minutes. The aid stations were handing out water in small sealed plastic bags which we had to tear open with our teeth in order to drink. I remember noticing bare footprints in the dirt as I raced. It was one of my favourite world cross-country trips with lots of fabulous scenery combined with watching most of the world’s best distance runners.

RELATED: What happened in this 1983 race shot?