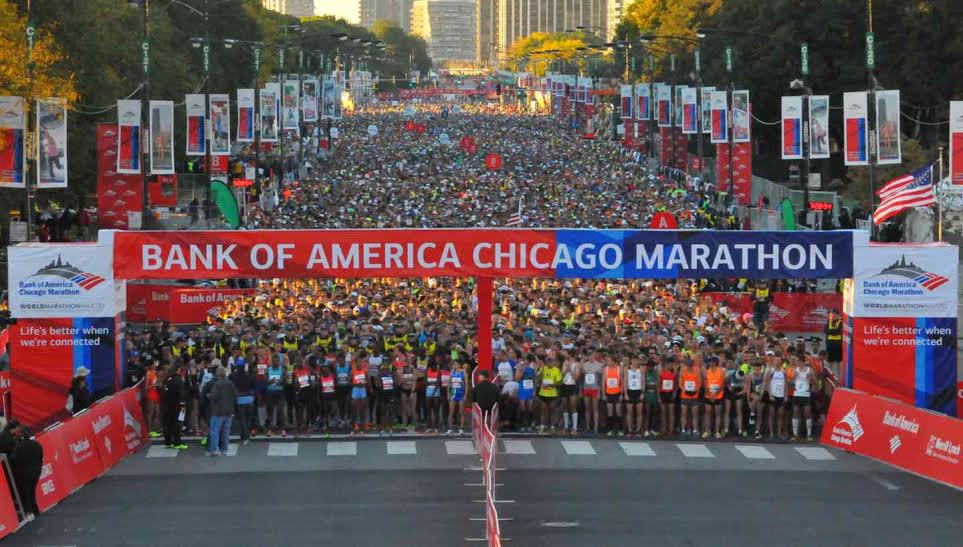 Several hundred Canadian runners will be heading south this Thanksgiving Day long weekend and gearing up for the Bank of America Chicago Marathon, which takes place on Sunday, Oct. 7th at 7:30 a.m. CT (8:30 EDT).

RELATED: How to watch the 2018 Bank of America Chicago Marathon

The Chicago Marathon is one of the six Abbott World Marathon Majors and is well known for being a flat and fast course—perfect for setting a new personal best–that showcases the best of the Windy City (FYI A name that refers to politics and politicians, not the weather). Last year, the event saw more than 44,000 finishers cross the line in Grant Park, making it the second largest marathon event in the world (after New York City).

Due to its large size, participants are slotted into one of a whopping 10 corrals based on their expected finish times. Here’s how the corral system works:

With so many participants as well as their own support teams of family and friends, the city can become pretty congested on race weekend. Finding accommodations, getting around and securing a place to eat can quickly become an added challenge. To help you make the most of the experience, here are a few insider tips from those who have run the race before.

Go to the expo ASAP

The expo is located about five kilometres south of the city’s downtown at the McCormick Place Convention Center. Conveniently, shuttle buses run constantly from several downtown locations throughout the day on Friday and Saturday, making getting to and from the expo an effortless experience. The expo is a sprawling attraction with lots to see and do, so beware, it’s easy to get carried away and spend several hours exploring all the while being on your feet. If possible, try to limit the time you spend at the expo. Plan to be at there for no more than an hour or two and know in advance what sort of exhibitors/products you’re aiming to explore. Definitely don’t stay all day and if possible, go on Friday so you can relax on Saturday.

Know your way around town

Once you arrive in downtown Chicago–take the orange line from Midway (~30 minutes) or the blue line from O’Hare (~1 hour)–and begin to get your bearings, figure out how you plan to get around, where you’re staying, where you plan to go and what you want to do. Make reservations for major and important meals in advance, especially if you have special dietary needs or restrictions. As a tourist, there are lots to see and do, but do yourself a favour and save the sightseeing until after the race. If you do find yourself with extra time, consider a boat tour (the architecture tours come highly recommended), bus tour or take in a show or movie.

The Chicago course is considered a “loop” that can be divided into three “arms”—the north, west and south side. The North Arm takes runners toward, to and through Lincoln Park and Belmont Harbour before returning south to the halfway mark near the West Loop Gate. Runners then begin the West Arm towards the United Centre and then return east through Pilsen and eventually Chinatown. The final 10K are run along the South Arm that goes down to 35th before making its way north, mostly along Michigan Avenue to the finish in Grant Park. The course features a large number of turns so knowing where you are on course and when the next turn will come can be very useful. All runners should review the course in advance so as to get a sense of where you’ll be running and the landmarks along the way.

Although organizers do a great job of setting up the start area including separating the corrals, providing plenty of porta-potties and signage indicating where and when you need to be in place, it can and is all quite overwhelming and not allocating enough time can create unwanted stress.

Aim to arrive early–at least an hour before the race start–and know exactly where (to which corral) you’re going. Runners may also be required to go through a number of security checkpoints and the lines for porta-potties can get very long so you’ll want to plan ahead and allocate extra time for that.

Those who are particular about what and when they eat on race morning may want to plan in advance and either bring and prepare their own breakfast or know exactly where and how you’ll get it.

It can and probably (hopefully!) will be chilly on race morning, especially when you leave your hotel at 6 a.m. Wear warmer layers that you’re prepared to throw away (and never see again) just before the start. There are few things as bad as being frozen before a long race and you won’t get much of a chance to do a proper warm-up. This is also applicable advice if it rains. You definitely want to stay as dry as possible to the point where you might consider keeping your shirt and shoes in a dry bag and not putting them on until just before the gun goes off.

Speaking of staying warm, you can probably forget having time (or space) to do any sort of run, jog or meaningful movement of any kind in the moments before the gun goes off. Once you stake a claim to some space in the corral, be prepared to be elbow-to-elbow with hundreds of others. As best as you can, try to relax, stretch your limbs and stay warm.

Use the first few kilometres of the race to warm up and find your rhythm. This may seem inevitable given the massive amount of fellow runners but once you find some space, the temptation may be to pick up the pace and try to make up any time lost in the crowds. Resist the urge and keep your pace under control. You’ll be rewarded for this patience later on.

Enjoy the crowds and support

This again may seem obvious (and unavoidable), but with thousands of supporters lining almost every kilometre of the course, you’re going to experience some amazing crowd support and cheering. Try to take in the atmosphere and the excitement and use it to your advantage. If anything, it will help distract you from the discomfort especially in the second half of the race.

The Chicago course takes you on an extensive city tour of many neighbourhoods, notable landmarks, parks and attractions. Use the changes of scenery to divide your race into smaller, more manageable sections and try to focus on the one you’re in rather than what’s still to come. Conveniently, there are mile markers and also 5K timing mats and clocks along the way which can help indicate your progress. Use each 5K segment as a unique block and just focus on getting to the next mat.

The second half kinda sucks

OK, so it’s really not that bad, but there is much less to see and much less crowd support, especially after Chinatown. Prepare for lonely sections between 30 and 40K. This is a good time to reflect on how you’re feeling and focus on maintaining your pace as you get closer to the finish. Things start to improve in the final 5K as you make your way up Michigan Avenue and the crowds start to reappear. 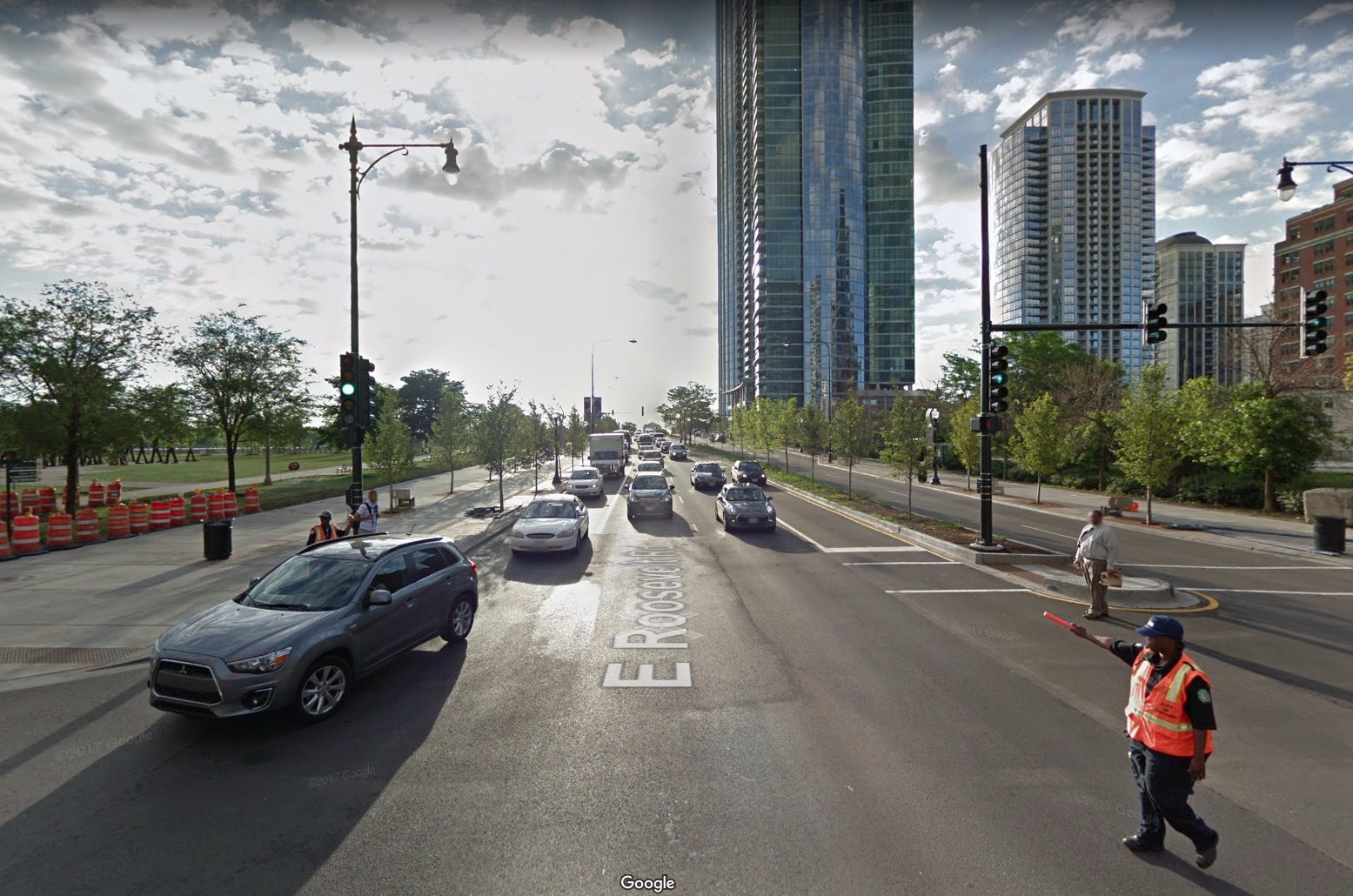 Chicago is said to be pancake-flat, but the course features one notable exception. Just before the 42K mark (yes, not until the very end), you’ll make a right turn off Michigan Avenue and onto Roosevelt Road. There you’ll be met with a short and gradual hill that given its place in the race, may feel more like a mountain before you make a left onto Columbus Drive and straight to the finish. Luckily, the loud crowd and impending finish should carry you up and over the speed bump and onto the finish line.

Chicago takes their marathon finish line area and celebrations seriously. Don’t be surprised if you’re handed a cup of beer before you see any water or electrolytes. You’ll be forced to make (i.e. shuffle) your way through a relatively long finish line chute passing various medical and recovery services along the way. Eventually you’ll find the family meet-up area and the post-race celebration zone before you eventually make your way back to your hotel for a well-deserved nap. And later, deep dish pizza is a must for post-race recovery!

For those not running on Sunday but rather following the progress of friends and family, be sure to download the mobile app which lets you track the progress of top runners as well as your own favourite athletes.