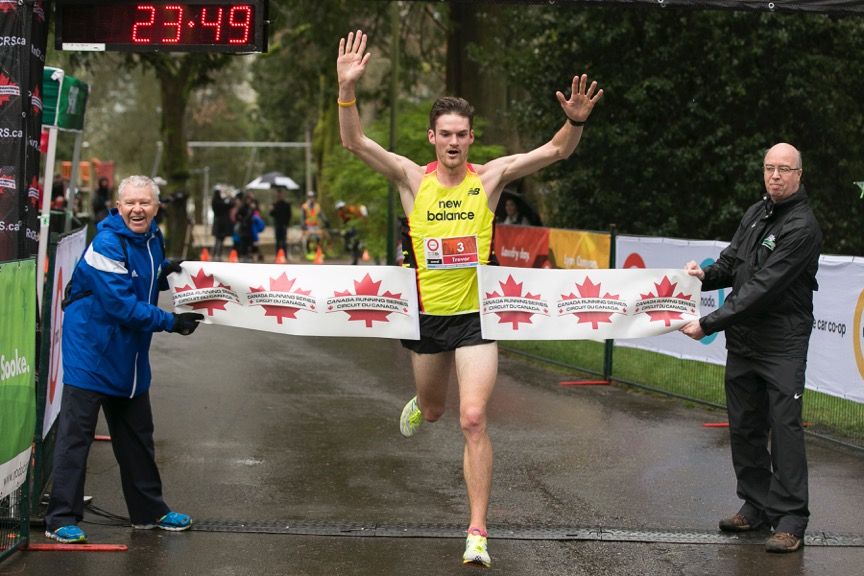 Trevor Hofbauer is eagerly awaiting his marathon debut this coming October. On Oct. 22, he’ll line up at the start line of the Scotiabank Toronto Waterfront Marathon which is both an IAAF Gold Label race and the Canadian Championship.

The move up in distance comes less than a year after he moved east to join Guelph, Ont.-based Speed River Track Club. The club, under the direction of Dave Scott-Thomas, counts Olympic marathoners Eric Gillis, Reid Coolsaet and Krista DuChene as members.

For fourteen years, the 25-year-old called Calgary home. When he moved to Ontario, he made many sacrifices: leavng behind his family and friends not to mention employment as the New Balance Technical Rep for Alberta, Saskatchewan and Manitoba. He hopes the it will pay in the long run.

RELATED: Catching up with Trevor Hofbauer

“In the past ten or fifteen years, I’ve created this unbelievable network out there– just charming individuals who I had to leave,” he says. “One of the toughest to leave was my grandmother, who is getting old. She is like my angel. That was most difficult.”

Hofbauer first attracted attention at the 2015 Philadelphia Half Marathon where he recorded a PB of 1:04:30– getting him in the ten fastest times ever by a Canadian. A third place finish at the 2016 Canadian Cross-Country Championships earned him a spot on Canada’s team for the IAAF World Cross-Country Championships in Kampala, Uganda. There, he finished 71st in the senior men’s race and was Canada’s top finisher. The half marathon, though, he admits was a turning point.”64:30 is a cool time but it’s nowhere close to where I think I can go,” he says.

“I’m going into the Scotiabank Toronto Waterfront Marathon with a very open mind because I’ve never actually raced a full marathon before,” says the runner. “I have an ‘A’ goal which is a preferred time, then I do have a ‘B’ goal which is for placement in the race. But my ‘C’ goal is to just finish the race and to learn as much as I can. I feel the marathon is where a lot of my potential can be found.”

The success of Speed River’s distance program was the principal attraction when Hofbauer first contacted Scott-Thomas. Their first face-to-face meeting during the 2016 Olympic Trials was a little awkward. Hofbauer was driving and spotted the coach walking on the sidewalk.

“I ripped into a McDonald’s parking lot and came jumping out of the car and I was like ‘Dave Scott-Thomas, how’s it going?’ I caught him off guard,” Hofbauer says. “It was so awkward. I was like ‘Dave I am not a super fanboy I saw you walking on the street and I wanted to introduce myself and wish you luck this week.'”

RELATED: By the numbers: Trevor Hofbauer’s drive to make his dreams a reality

These days, Hofbauer has settled into a weekly routine that includes as much as 200K of running. Until recently, he trained three days a week with Eric Gillis but the three-time Olympian has since moved to Nova Scotia to take up a coaching position at St. Francis Xavier University. Nevertheless, training partners are close at hand. He shares a rental house with fellow Speed River distance runners Evan Esselink, Andrew Nixon and Chris Dulhanty.

Currently, he focuses on training as a full-time endeavour though over the summer, he worked up to 45 hours a week at a golf course. Now that he’s no longer employed, he’s living off the savings accrued over the past few years. He studied hospitality management at the Southern Alberta Institute of Technology for two years. He’s aware that winning the Canadian Marathon Championship would earn him $5,000–a nice prize. Come Oct. 22, running fans across the country will know if the sacrifices have paid off.