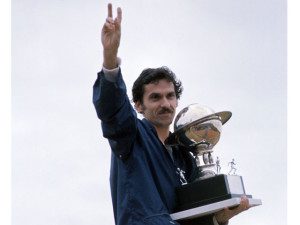 When Jerome Drayton set the Canadian marathon record of 2:10:09 in 1975, he was one of the top marathoners in the world. He ran it during one of his three Fukuoka Marathon wins, a race that was at the time considered by some as an unofficial world championship. He ran it well before the sport became dominated by East Africans, but that time would rank 130th on the 2014 top lists.

Thirty-nine years later, the world record has been significantly lowered but the Canadian record remains. It’s the oldest Canadian record in track and field or road running. What has made it so elusive to Canadian runners while other records have been bettered?

Last weekend in Toronto, Eric Gillis took another shot, among many, at breaking the record and again fell short. He ran a personal best 2:11:20, but was still over a minute off of Drayton’s record. He faded after 35K, a point at which some say the real race is just beginning.

“There was a stretch there without very much depth and without depth you’re not going to get the chances of a fast time,” says Gillis of the 1990s, and 2000s when there were few serious attempts at breaking Drayton’s record, but there was no shortage of athletes chasing the record during the 1980s who never managed to break it. None really even came particularly close.

Gillis points out that some of the incentives to run a pace that is below the record is gone. When Drayton and his contemporaries were winning major international events, it often took only 2:10 or 2:11 to win. They often weren’t running these paces with the intention of breaking records; they were running with the intention of winning races. Now, even as prize pots have increased in size at major marathons, Canadians and other non-East Africans are usually left running for times or side titles. Even lesser-known marathons often have unknown Kenyans on the startlist who handily outrun even the best national athletes. 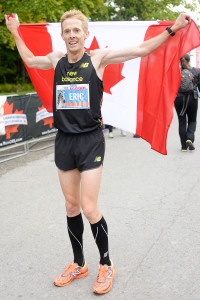 But the years are looking more like the 1980s than the 1990s with multiple athletes running times within a few minutes of the record each year, which is a good sign for those who want to see it broken.

Dylan Wykes didn’t run a marathon this fall due to injury, but is still actively training. He holds the second-fastest marathon time ever for a Canadian at 2:10:47 from Rotterdam in 2012. He trains with Rob Watson, another of Canada’s top marathon runners. Watson dropped out of his fall marathon shortly after the halfway split. Reid Coolsaet, another hopeful who has been chasing the record for a few years with Eric, trains in Guelph with Speed River Track Club. Running fast does seem to snowball, so with these four setting the bar it will hopefully lead to even more Canadians looking to break the record.

For now, Gillis is focused on training hard and running well.

“Because it’s such a big record it’s almost becoming its own little monster,” says Gillis. “Everyone, including myself, wants to see it go down so bad that you start to really think about it a lot. So, it needs to be put in perspective. It’s 39-years-old and it’s still a quick record. It will go when it goes but it’s not a live or die thing.”