Contemplating your first race? If you’re new to running, starting with a 5K is a great idea. It’s relatively short and manageable, doesn’t usually require much in the way of hydration or fuelling, and it will give you an idea of what racing is all about.

RELATED: Should you give racing a try? 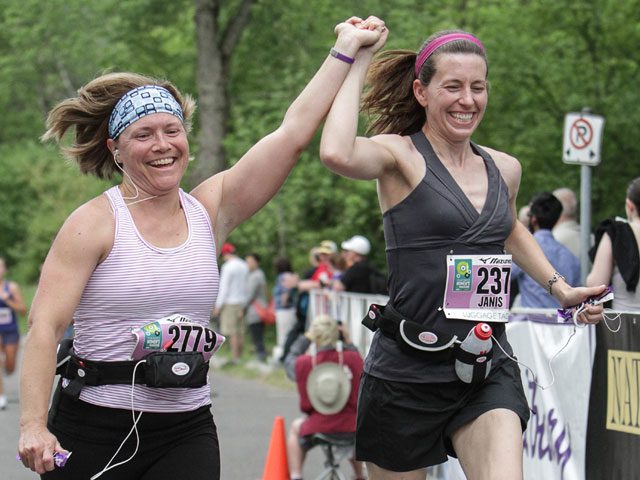 Many marathons and half-marathons also offer the 5K distance, and if they’re organizing a long race, you can be sure the 5K will be well organized, too–a big plus when you’re not sure what to expect at your first race. There will be plenty of information online to instruct you on where to go and when. (Hint: the 5K distance at marathons are often quite small, and it’s not unheard-of for first-timers to win age group awards.)

Here are some excellent races to put your training to the test this fall.

This year the Servus Edmonton Marathon 5K run/walk starts at a leisurely 11:30 on Sunday morning. The course is an out-and-back, running west along Jasper Ave. from the start (just west of 97th St.) for 2.5K, with just two turns: a right on 111th St. and a left on 102nd Ave. before the turnaround at 116th St.

@edmontonmarathon 5k today! Great event and awesome to see so many local runners crushing it out there. Stoked to come away with a victory in the 5k! Thanks @lisacass.idy and @koolaidmatt for the photos #running #runyeg #edmonton5k #edmontonmarathon2017

Women set the pace at the Toronto Women’s Run Series. If you’re a woman who would appreciate racing with mostly other women (men may also enter), there are a number of events throughout the year, held in Sunnybrook Park, away from cars, in a fun and supportive atmosphere.

Feeling inspired by these incredible women who won top 3 in the 70+ age category of the 5k! 💪🏼🏅 #goals #womensetthepace #towomensruns

All the race distances, including the 5K, are out-and-back along the scenic St. Lawrence River.

RELATED: How to start racing

Right in the middle of Canmore, the 5K is flat and scenic, with almost no elevation change.

Perfect morning for a race in the mountains👌🏻 #canmorerockymountainhalfmarathon #sundayfunday

One of Toronto’s best-loved races, the Toronto Island runs start on Centre Island. The looped 5K course runs east onto Ward’s Island and returns via the boardwalk. A barbecue lunch is included.

Maritime Race Weekend might be the most fun pirate-themed set of races anywhere. It boasts two 5Ks (one on Friday evening, and one on Saturday morning). Both start and finish at Fisherman’s Cove on Wharf Road in Eastern Passage, N.S.

The Quebec City races are full of joie de vivre. The looped course starts on the beautiful Grande Allée and turns onto the Plains of Abraham before returning to the start.

Toronto is one of the biggest race events in Canada, and participating in any of the race distances is thrilling. The 5K starts on Lakeshore Blvd. at the CNE and proceeds east to Bay Street, with a left turn into the financial district and finishing at Nathan Phillips Square.

Running season is back! Looking forward to the #scotiabank5k in October. Who’s coming???! 🏃🏾‍♂️🏃🏾‍♂️🏃🏾‍♂️#gingerbreadman #healthiswealth