In the 44 years since its inception in 1975, the Scotiabank Ottawa Marathon has grown to become the biggest marathon in Canada. From 146 runners in year one, Ottawa is now a weekend-long running extravaganza with 40,000 participants in six events. It has also seen a lot of records set–some of them serious athletic records, and some of them more fun than serious.

RELATED: Why Tamarack Ottawa Race Weekend is one of the best races anywhere

Tamarack Ottawa Race Weekend (which takes place this year on May 25 and 26) really lends itself to record-setting. Why? Because of its superior organization (both the marathon and the 10K are IAAF Gold Label events), because the courses are flat and fast, and because the atmosphere of celebration and achievement is everywhere. Here’s a look at some of the amazing records, both serious and fun, that have been set in the nation’s capital. Why not get inspired and go for a record of your own?

Last year Gelete Burka of Ethiopia ran the fastest marathon ever by a woman on Canadian soil with her 2:22:17 finish, eclipsing Tigist Tufa’s course record of 2:24:31 (set in 2014) by two minutes and 14 seconds.

In 2014 marathon world record-holder (women-only) Mary Keitany broke the Ottawa 10K course record by three seconds with her 31:21.7 finish. Keitany went on to win the TCS New York City Marathon later that year for the first time. She has won NYC three more times since then (in 2015, 2016 and 2018). Her women-only marathon world record of 2:17:01 was set at the Virgin Money London Marathon in 2017.

Yemane Tsegay of Ethiopia has held the men’s marathon course record (2:06:54) since 2014, and he won the race again in 2018. Tsegay has run 14 career marathons in under 2:10, one of only a handful of men to claim that distinction.

In 2017 the Scotiabank Ottawa Marathon had 645 people qualify for Boston, more than any other race in Canada. (There were 4,388 finishers that year, and the race ranked ninth overall in North America for numbers of Boston qualifiers.)

Fastest marathon by a single-leg amputee

In 2010 Rick Ball, originally from Orillia, Ont., bagged the world record for the fastest marathon by a single-leg amputee, with a time of 2:57:48. Even more astonishing, the Toronto Transit Commission mechanic, who lost his left leg in a motorcycle accident in 1986, broke his own record (set the previous year at Boston, in 3:01:50).

Alan Forster ran the National Capital Marathon (as it was then called) in 1979, at the age of nine–certainly one of the youngest, if not the youngest, people to run it, back in the days when there were no minimum age rules. It was his first marathon. He ran it with his dad, and they finished in about four hours. Forster ran Ottawa again in 1980 and 1981. When he reached middle school, he switched to track.

The family was now living in Newfoundland, and Forster became a very fast track athlete, setting several provincial records, some that still stand (for example his 3:56.86 for 1,500m and 8:38.8 for 3,000m in the youth division). Forster moved back to Ottawa for university, where he won a national cross-country title with the University of Ottawa Gee-Gees in 1990.

GUINNESS WORLD RECORD HOLDER!!!! It’s official!!! . Today I was officially approved for “Fastest 10km carrying 100lbs” @tamarackhomes 10km race! I am so beyond excited and proud!!! . I really could not have done this without the help from my amazing team of friends!!! @lukeshaw17 @gigglenuckle @millbrooktactical @soph_tee @brittwynn @deannabrasz @ocr_jen14 @ocr_fm @yancyculp @seeder13 @mudgear @maxinesarahbrown @cobro84 @eberlestock and Wayne Thank you so much!!!!!! . This is proof that BIG DREAMS can come true! I have wanted this for as long as I can remember. This was such a difficult process: applying, being approved, finding the perfect race, following the guidelines exactly and then executing… but if you really want something, there is ALWAYS a way to make it happen!!!! . Photo credit: @ottawacitizen . #yancycamp #dreamscometrue #guinnessworldrecord #worldrecord #ocr #ocrtraining #goodlifefitness #nolimits #dreambig #goals #motivation #girlswholift

Granted, he’s not the first person to run 100 marathons, but for Gene Jochen of Peterborough, Ont., running his 100th marathon in Ottawa in May 2018 was significant. Jochen’s first marathon was also in Ottawa, in 2003. His time was 3:16:23, only 23 seconds over a Boston qualifying time. Jochen did subsequently qualify, and went to Boston 10 years in a row. 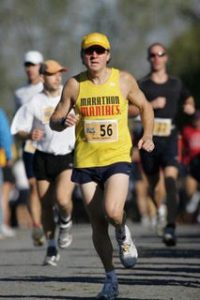 Welcome to the new look!